The Guitar Hero series have been a smash-hit on the Playstation 2. Now, the highly successful series has made its way onto the Xbox 360, with HD Graphics, ten new songs, and the same addictive gameplay that PS2 Owners have been enjoying for the past two years. Guitar Hero II is a Music/Rhythm game that consists of hitting the correct color buttons and strumming while the notes scroll down the screen. It is very similar to games such as Dance Dance Revolution (DDR), except instead of techno dance music, you play along with Rock music from throughout the years.

Guitar Hero II lets you play as the character of your choice, such as the Punk Legend Johnny Napalm, Guitar Goddess Pandora, with a cast so diverse as to even include the Grim Ripper. You go from venue to venue, as you unlock new songs to play and earn cash to purchase new characters, guitars, outfits, and more from the store. While your not rocking through the career mode, you can replay whichever song you want on Quick Play, or you can practice songs that are giving you problems in practice mode. If you have a second Xplorer controller, you can team up with a partner and play cooperative mode or face off mode with your partner to see who the best rock star is. [Editors note: The Guitar is not required for gameplay; however we strongly recommend it. Who wants to rock out with a controller?]

The Rock Meter represent just how hard you rock baby!

The sound in the Xbox 360 version is again a massive improvement over the PS2 version. The songs sound so much better thanks to the 5.1 options the Xbox 360 can produce. The Playstation 2 could not do this, and you can definitely tell a difference between the two. The songs sound great, and the sound effects are fantastic. While playing, if you miss a note, you will be treated with a sound of a guitar breaking a string, and it sounds fantastic. You are also greeted with some awesome guitar licks when you click options in the menu, such as entering a cheat code or accepting the song you want to play. The songs in the game are a great list of songs. A lot of the songs are not very popular, so you may not know a few of them; however, they are great songs to play. Some of the greatest bands have put their songs into the game, including Van Halan, Guns N Roses, and Lynard Skynard. There are over seventy tracks in the game, and nearly all of them are a blast to play. Overall, the song list is strong, and the sound effects are great.

The game play is what makes Guitar Hero so fun. You simply hit the notes at the right time as they scroll down the screen. You play the game with a guitar controller. The controller for the Xbox 360 has been modeled after the Gibson Xplorer and is a fantastic controller. It’s a lot smaller than the Playstation 2 controller, which was modeled after the Gibson SG. The controller for the Xbox 360 is not as good as the SG Controller. The whammy bar had problems at launch, but was fixed via an Xbox Live Patch, and the tilt feature does not work as good as the SG Controller, which can cause some problems while trying to activate Star Power. The gameplay is a blast, and when you first play the game, you will think you will never be good at it. You will get your butt kicked on the easiest difficulty, and even taking a peek at Expert difficulty will make you sick! After awhile of playing, you will get better and after you play for a long period of time. Your fingers will start getting tired and may even eventually start hurting. 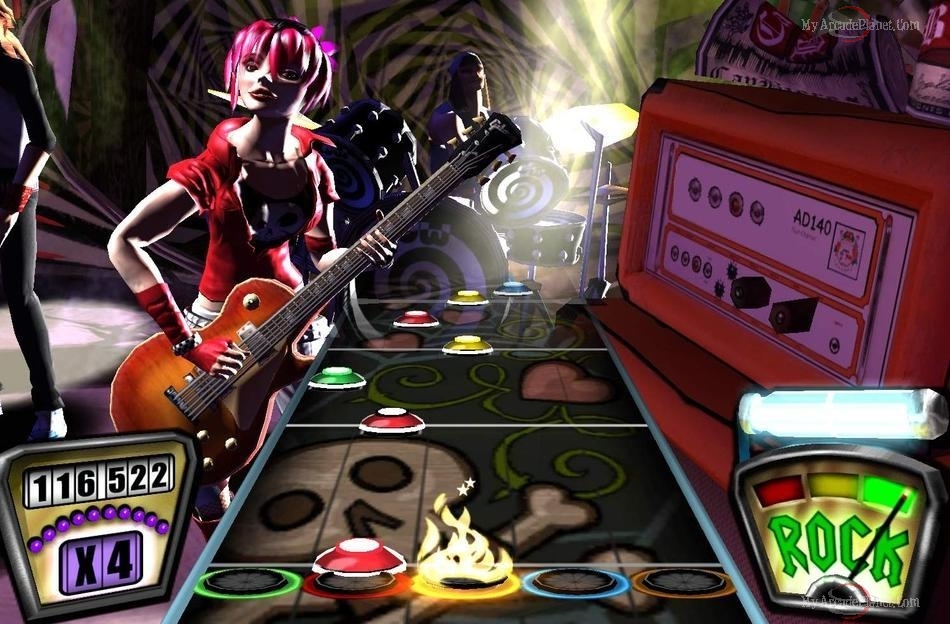 “Girl’s can rock hard core too.”

The replay value is great in Guitar Hero. You will constantly be replaying songs to master it on higher difficulties and to get higher scores to post on the Xbox Live leaderboards. The multiplayer feature will keep you and a friend busy for a long time; however its disappointing that the game does not have multiplayer over Xbox Live [Activison promises it will be in Guitar Hero III]. Overall, you can play this game for hours and might even play it up till the next installment is released.

Overall, the game is a blast to play. The game will consume many hours of your life while playing. It is a must buy for any Xbox 360 owner. Fans of the PS2 version will enjoy the Xbox 360 version more, thanks to the ten exclusive songs, and the many songs that will become available in the future thanks to Downloadable Content.