Welcome to The Classic Game of the Week, where each week, TGR will dust off a rare gem that time forgot. It could be a game that slipped under the radar, never got the attention it deserved, or simply ended up being a one-hit wonder. Each one is unique in its own right, and deserves to be played at least once.

The late 80s (and to some degree, the early 90s) saw many-a-space shooter for the NES. Sure, we’ve all heard of the de facto standards: Galaga, Gradius, and R-Type, to name a few, but today, I’m taking a look at one of the lesser known NES space shooters: Gun-Nac. 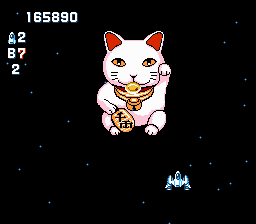 Released stateside in September of 1991, Gun-Nac is a vertical scrolling arcade-style shooter. Gameplay is fundamentally simple; blast waves of enemies, upgrade your ship, and defeat the boss at the end of each stage. That said, don’t think for a minute that Gun-Nac is formulaic or boring – it isn’t. In fact, the game’s greatest strength lies in its execution. While it does borrow many elements from prior space shooters (most notably Zanac, which it parodies to some degree), it carves its own niche in a number of different ways.

Being released relatively late into the NES’ life span, Gun-Nac features some of the best graphics to grace a space shooter on the system. From surprisingly detailed levels, to screen-filling bomb effects, to a silky smooth frame rate, Gun-Nac’s visuals do not disappoint. 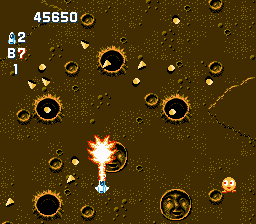 In addition to great graphics, Gun-Nac features an almost staggering amount of power-ups and customization options. Five different weapons, each with several levels, four different types of bombs (stackable, to enhance their power), and wing upgrades. Most power-ups, with the exception of the screen-clearing enemy eraser are also available to purchase prior to a level in the in-game store.

Speaking of customization, Gun-Nac’s control panel contains a few rather uncommon tweaks, such as the ability to change priority between speed and sprite, and an option to turn bullet ricochet on and off, in addition to the standard options such as difficultly level and a sound test. 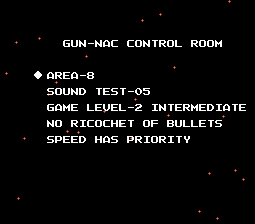 Lastly, Gun-Nac, unlike its older brother Zanac, does not take itself too seriously. Between an interesting choice of stage bosses — ranging from a giant acorn, to an evil space rabbit, to a coin slinging giant cat — to unique level designs (the bank in area 5, along with its monetary-themed enemies, is particularly amusing), Gun-Nac offers lighthearted fun for everyone.

One more thing: if you’re a hardcore gamer, it would do you well to crank up the difficulty a notch, or else you may find Gun-Nac to be somewhat short. At a total of 8 stages (9 if you count the hidden area accessible via the control room), the 133t can easily complete the game over a weekend on lower difficulty levels. Even so, it’s an absolute treat while it lasts. I just wish the sequel the credits hinted at way back when actually came to fruition.