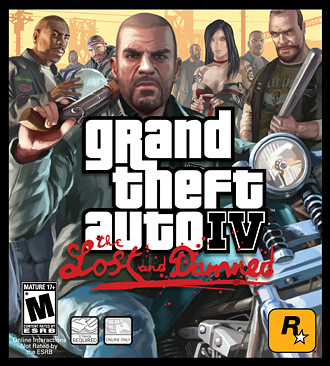 Today on TGR…
Top 10 Exhilarating Video Game Songs
If you consider yourself a video game music hauteur, check out our list of the top ten exhilarating video game songs to see if you agree.

GTA 4 The Lost and Damned trailer offers Niko cameoRockstar released a trailer today for their upcoming Grand Theft Auto 4 DLC The Lost and Damned. Aside from explosions, shouting and guns, the trailer also shows a quick glimpse of Niko Bellic, the main character from the original game.

The DLC will be available on the Xbox 360 February 17 for 1600 MS points ($20). Less than one week until we can figure out if Johnny also has an annoying cousin with a cellphone.

Midway files for Chapter 11 bankruptcy
The ailing economy has dealt a fatality to the house that Mortal Kombat built. Midway is now unable to pay all their debts, despite renegotiating that debt a mere month ago.

LA Times offers the following explanation of the situation, if you’re in to that sort of thing:

The 30 largest consolidated creditors without collateral backing their claims are owed a total of $256.2 million, court papers show. Wells Fargo Bank NA, as indenture trustee for noteholders, is listed as the largest unsecured creditor. The amount due under the notes is $150 million, according to court papers.

The Acoustic Track Pack for Guitar Hero World Tour is now available on the Xbox 360 and PlayStation 3. The track includes the following tracks:

Guitar Hero Metallica pre-order bonuses detailed
In case you haven’t pre-ordered the game yet and are on the lookout for some free crap, this might get you out of the house. Pre-order the game at the following places, and get the associated bonus:

The game is, well, exactly like Minesweeper, except in 3D and somehow multiplayer. Unfortunately, it will be much harder to play this version at the office while your boss isn’t looking.