Everyone likes a good game of Risk now and again, right? Well, at least in theory. When you’re seven hours into a seemingly endless game, chances are someone’s going to end up flipping the game board over, sending the pieces scattered around the room. If only there were a developer brave enough to strip Risk of its lengthy turn-based play and focus around the action, only. Luckily for us, Phil Hassey showed up just in time with his interpretation on the classic game of domination with the iPhone title Galcon.

Take the better aspects of Risk: annexing properties, battling between players and trying to rule the entire map, and get rid of the lesser-enjoyed qualities: the slow turn-based battles and insanely long game length. Scale it down about 100 times and add online play. Oh, and put it in space (because laser beams trump lead bullets any day). That is Galcon in a nutshell. At the start of each game, you’re given a planet with 100 “units.” Each unit acts as both an offensive point and defensive point, so if you launch 50 units at a neighboring planet with 40 units, you’ll defeat it, capturing the planet. Larger planets will replenish units faster than smaller ones, making them more sought after by all the players. Once you’ve eradicated all of the opposition, you win! It’s that simple. 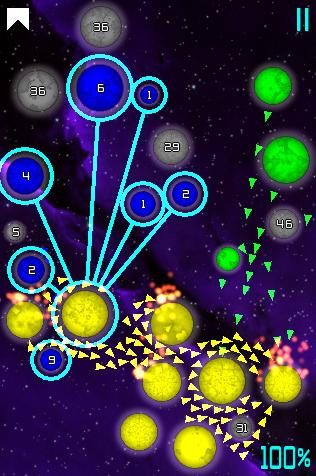 Primarily the main core difference between Galcon and Risk (besides the obvious fast-paced action) is the fact that at no time will you be able to see how many units enemy-owned territory contains, so you’ll have to use extreme discretion when sending attacks over to other planets, because the more units you send to attack, the weaker the planet that sent them will be. When you throw in 4-player madness to the equation, it becomes a frenzy of collecting unused planets for automatic unit harvesting, protecting the territories you already have, and attacking enemy properties as well.

Each game of Galcon lasts anywhere from one to five minutes, and it’s usually easy to tell who will have the upper hand right in the beginning. Since empty planets are placed at random, your starting location may be beneficial in comparison to your enemies. Controlling your units is simple and intuitive. Use swipe gestures to send waves of attackers to enemy territory, or double tap any of your occupied planets to select everything you’ve got, for a crazy massive attack. You can even shift units around from planet to planet, as long as you occupy both, making giant powerhouses of destruction.

Galcon features up to 4-player online play, and will set you up with players of equal level, or allows you to choose who you fight in what room, much like any standard server list. Online play works flawlessly on Wi-Fi, 3G, and even decent-connection EDGE networks, so diving into the real-world action is possible at any time.

There’s not a lot that can be said, visually, about the game. Everything is very distinct and colorful, and the game operates in both horizontal and vertical views with no benefit to either. Throughout this arcade-like Risk experience, there’s only one song that continuously plays (of course, you can shut it off and listen to your own music), but to be honest, it’s a pretty catchy tune and fits the short-term battles very well. 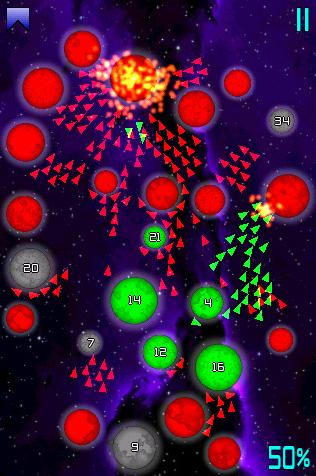 At the end of the day, Galcon is just a very simplistic spin on Risk. It’s incredibly addictive and polished with an easy learning curve. You might think that you’ve mastered this game within a few minutes, but jump online and take on the pros for a real challenge. With multiple offline modes that revolve around the same core gameplay, and fairly robust online play for a mobile title, Galcon is quite the impressive iPhone App. Instead of grabbing that 5-dollar burger/shake combo at McDonald’s next lunch break, spend that cash on Galcon. It’s far more fulfilling with only half the calories!