Hideo Kojima was very upfront about his keynote speech.  “I’m not going to give out any presents,” he said, referring to Nintendo’s gift of [i]Rhythm Heaven[/i] to everyone in the audience.

Additionally, even though it was to be a very long presentation, “there are no sessions going on at the convention right now, so you can’t escape.”

Kojima then proceeded into the meat of his production, Making the ‘Impossible’ Possible – Solid Game Design.  He opened with a simple metaphor.

“So here comes snake, walking along, and he’s just going through his everyday life,” Kojima said, while his presentation showed Snake marching along a simple path. “However, life is not always flat.  Usually there are obstacles.”

On command, a large block pops up in Snake’s path.  As Kojima narrates, Snake becomes frustrated that he cannot jump over the wall.  Nintendo mascot Mario zooms up behind him and easily clears the wall. 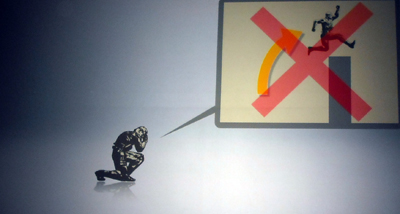 Now Snake is even more upset.  “If I were Mario I could jump over it,” Kojima said, “Now this I could define as a barrier of impossibility – Snake thinks he’s not Mario so he can’t jump over.”

“Impossible is merely an assumption in this case – Snake’s mind,” Kojima continued.  “We need to change ideas here.” 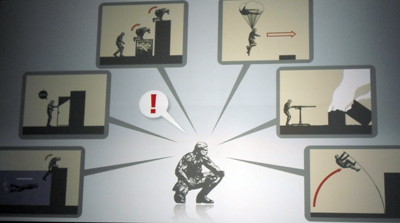 Even then, needing to get over the wall is still an unnecessary assumption. “Let’s change views,” Kojima said. 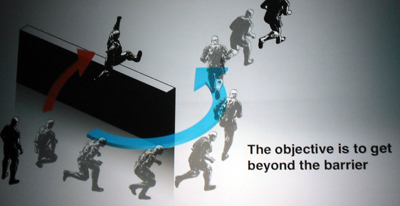 “What ‘barriers of impossibility” do we encounter when developing games?” Kojima asked, linking the extended metaphor to game development.

After establishing his running metaphor, Kojima finally came to the first game that “made the impossible possible,” Metal Gear.

Kojima joined the MSX2 team in 1986.  Based on the success of Rambo: First Blood Part 2, the team was tasked with creating a combat game for the MSX2.

This may not sound very difficult, but due to the technological limitations of the MSX2, such a game would be quite difficult to pull off.  The machine could only display 32 sprites at a time, and only eight sprites could be displayed horizontally at a time.  If there was a ninth, it would disappear.  “This is the actual product, it’s not a bug,” Kojima assured the audience, while showing an example from Gradius.

“I’m sure you feel much better that you weren’t born back in those days,” Kojima joked.  “We thought it was just impossible to go over this wall”

So now they had to change their objective to find an easier wall to climb.  Instead of a combat game, why not create a game that didn’t require so many bullets, or sprites, to be on the screen at once?

“Of course you’re running around, but why not make the player hide?” Kojima asked.  “Maybe it will still not sell, because it’s not very heroic.”  To make it more heroic, Kojima decided to make the game about infiltration.

With game design bridging the gap, a genre was born.  “You might know the NES version but that’s a crap game because I didn’t participate on it,” Kojima informed.  The first Metal Gear became a huge hit, and people wanted a sequel.

Kojima was expecting new hardware on which to develop Metal Gear 2, but “there was no advancement to the hardware.”  The challenge now became to develop a deeper stealth game using the exact same hardware.

MGS2 added cone of vision, multiple alert statuses, and tracking enemy motion across multiple screens.  The team’s next goal was to create a 3D stealth action game… on the MSX2.

“The wall of impossibility this time is quite high,” Kojima said.  “This is totally impossible.  As I explained MSX2 could only display 2D.”  Luckily help would come along.

“However after 4 years there was a big incident,” Kojima said.  “PlayStation was released…  At that time, only supercomputers allowed real time 3D polygons, but PlayStation brought this to your home.”

The hardware of the PS1 brings Snake much closer to his goal.  Now the player could hide in ducts, use first-person view, and fully utilize better hardware for a better experience.  “This was really 3D,” Kojima said.

Kojima played examples of each version of the voice acting, with each style causing him to crave a particular kind of food.  “It sounds like I wanna eat some sausages,” he noted, while listening to the German, and “It’s very passionate, isn’t it?  I feel like I want some paella,” during the Spanish voice.

MGS was also the first Metal Gear to feature extended cutscenes.  “I guess these are not popular now, these famous cutscenes?” Kojima joked.

“An immersive stealth game was the key – it’s not just realistic looking,” Kojima said.  The advent of the PlayStation 2 allowed greater technological capability, more storage, and more actions by the player.

“We did motion capture for the first time,” Kojima said.  “I believe that some of you didn’t like these long cutscenes very much… uh, you’re supposed to laugh at this point.”

However, there was a definite trend in the past Metal Gear games that Kojima wanted to break from.

“Metal Gear was always set on a man made artifical environment,” Kojima explained.  “The man made or artificial environments – it’s easier because it’s constricted in a way.  You could calculate.  But, if it’s a natural environment, you don’t know what you can design.  It’s so unlimited.”

This entry added camouflage and curing to really draw the player into the environment and give them a sense of survival and subsistence.

“Everyone said the cutscenes were too long in MGS2 so I made it shorter in MGS3 and found a good balance,” Kojima said, pausing before continuing with, “you’re supposed to laugh here ok guys?  I’m talking about my cutscenes!”

By this time Kojima had been hearing about this ultimate game machine – a machine with so much power that it would make anything possible.  “There was this monster machine coming out – you could do anything, anything,” Kojima said.  “You don’t even need game design.  That was the rumor I heard.”

However once the machine finally arrived, the truth didn’t match the dream.

“Of course the hardware spec was really high,” Kojima said, “I don’t want you to take me wrong, it was just a rumor that we heard.  I thought as a developer / creator that I could do anything.  I had limitless ideas.  Of course the PS3 is a great machine, but our dreams and expectations were so high, of course we can’t create the ultimate stealth game we imagined.”

And so, Kojima set to using the actual power of the PlayStation 3 to create a new stealth-based action game.

Metal Gear Solid 4 introduced a chaotic battlefield where the player had the opportunity to choose a side while traveling through an already-raging conflict.

“It’s a monster machine, so the cutscenes are monstrous as well,” Kojima joked.  “You’re supposed to laugh even more!  Come on!”

After panning out, Kojima revealed the long path of Metal Gear, and pointed out that the original difficulty that seemed so impossible to surmount now seemed trivial.

“One example – you can run anywhere you want, there’s no loading screen, or you can ride any vehicle you want, or you can destroy anything you see,” Kojima said.  “And the popular games recently are using this kind of game design.”

He then predicted the future of game development involves a combination of these two approaches.

“I’m going to add both the western and Japanese way of designing,” Kojima said, “that’s my image of the next Metal Gear.”  Kojima then summarized his thoughts.

“Before giving up and saying I can’t do it, let’s identify what the impossible barrier ism because I think it’s only what you’re thinking – you haven’t experienced it – and actually it is possible,” Kojima said.  “Yesterday’s impossibilities become today’s possibilities.”

“I want to make great games with everyone, so let’s overcome this barrier of impossibility and create great games in the future,” Kojima said.