Even though FPSs, RTSs, and RPGs litter my shelves, I’ve found that I’m a secret speed freak. I enjoy fighting incalculable amounts of hellish demons and saving the world before noon as much as anyone, but sometimes nothing can match the thrill of driving a fast car at dangerously high speeds. Because of my secret desires, I found myself excited for I-Play’s Fast and Furious, despite the reputation of movie-based games.

First, I’d like to talk about the controls, since this is the first game I’ve played without a trusty D-pad. Luckily, the controls for the iPod version of Fast and Furious are easy to handle. You don’t have to worry about keeping the speed up in this game; that’s done automatically. All you have to do is steer the car, operate the brakes, and when necessary engage the nitrous oxide. The last two controls are touch sensitive so you have to use your thumb to hit the brake, and your other to hit the nitrous. It’s a smooth and easy implementation which helps, considering most of the races require a steady hand and deft maneuvering.

The game has seven race types across four game modes. There is a quick race mode – where you can pick and choose the maps you want to race, a story mode – where you race a three random maps per stage, and an online and WiFi multiplayer mode. Like the hardcore racers from the film, this game is aimed at the serious racing fan. Before each race, vehicles stats such as drift, drag, nitrous capacity, and racing performance will come into effect. Even a newcomer can figure of which cars can do best due to the handy graph provided. This also allows for players to raise or lower the difficulty level which might be needed on some of the maps.

As for the graphics, the quality is similar to the PS2 game Need for Speed: Hot Pursuit. The cars look solid and well designed, but not quite to the level of their console cousins. Even still, the courses and vehicles are well put together for an iPod game, if not cutting edge. Some of Fast and Furious’ lighting effects – such as the flame from the nitro boosters or tunnel lights – are much flashier. The audio of the game is the same story; it does its part but isn’t spectacular. 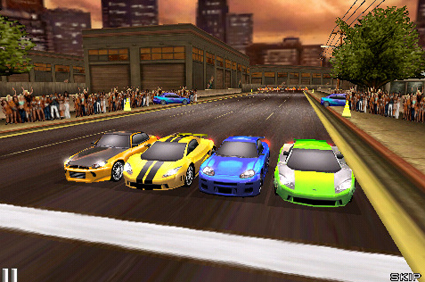 There are some problems with Fast and Furious. The game can be too hardcore for its own good, sometimes sacrificing fun in the process. Drift Racing also suffers from overly sensitive controls – you sway from side to side at the slightest movement of the controller. It’s not easy to race against two other opponents when you can’t even drive straight. Additionally, the game recycles levels into modes that don’t work well, which causes a great deal of frustration in story mode. When not crammed into ill-suited modes, the levels themselves can get repetitive after a few plays.

Despite some issues, Fast and Furious is a good game for those who want a racing title for the iPod Touch. Easy controls, variable difficulty, and WiFi connectivity / online racing provide great replayability.