I use my iPhone for gaming, talking, email and much more. Add to that the fact that I use the iPhone for the GPS and have a BlueTooth headset on all the time. All these activities easily run down the standard iPhone battery in no time. I used to use the PowerAirPac13 for extra juice while travelling but found that to be just another device to charge and take up space. 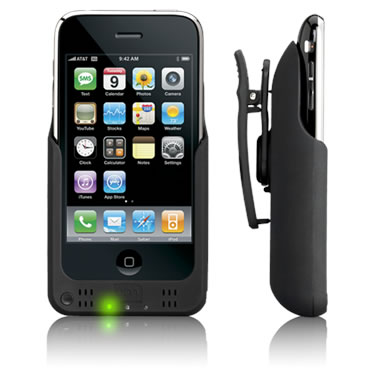 Having the FUEL on my hip makes life just a little more simpler by giving me a protective case and extra power. While affording me only one device to charge versus two.

The battery pack has a 2300mA battery, according to case-mate, means that users can expect to get up to an extra 2.5 times the amount of power.

In other words, you can get;

Some features that are included with the iPhone 3G Fuel is an on/off switch, a 180-degree rotating belt clip as well as the ability to charge and sync your iPhone while it is still in the case. It also has a 3 color LED status indicator that shows green for fully charged, red when you are charging and yellow for when the battery has less than 40-percent of power left.

In using the FUEL casemate for a few weeks, I did find myself wondering if the iPhone was charging when the USB cord was plugged in and the FUEL Casemate was charging.

Overall I have to say that using the FUEL has increased my mobile power confidence 3 fold.