When one thinks of the immortals of the video game progeny, games like Tetris, Prince of Persia, and Dungeons and Dragons come to mind. These games offer hours of fun with sublimely simple game play. Recent years have given rise to a new game type in this vein; tower defense. Its simple but addictive formula has caused it to circulate across the Internet. Chillingo and More Games Entertainment put a twist on this classic game type with Knights Onrush for the iPod Touch and iPhone.

Tower defense’s concept is simple to describe but complicated in execution; protect your castle by building towers to slow down and/or destroy your opponent. So it is with Knights Onrush. You have castle, against which rows upon rows of pint sized adversaries try to enter. To keep them out you have upgradable fireballs, large rocks, dragons, pits to Hell, and other such deadly devices. 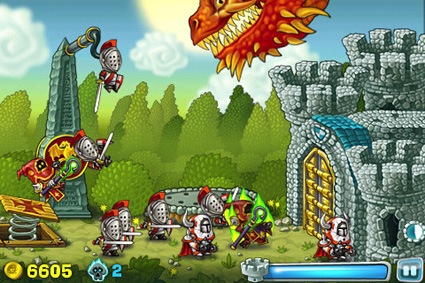 The enemy is knocking at your door, and if you don’t stop them it’s game over. So far, things are standard tower defense, but Knights Onrush provides a twist by utilizing the iPod’s touchscreen. You can pick up enemies and toss them back, hurl them up in the air, or activate your defenses to knock them out. As enemies come in both waves and groups you will have to keep your finger moving constantly to safeguard your castle. Swish, drop a rock onto them, click, fire the cannon, swish again, send several of them flying into the air. You won’t get bored or have a stray thought – the game is extremely engaging.

Knights Onrush’s graphics are well done, bright, colorful, and somewhat cartoonish, but also extremely violent. Enemy soldiers burn to a crisp by exploding powder casts, break in two when dropped from a great height, or immolate to a skeleton when dropped in a Hell pit. The slapstick violence feels like a PG-13 Warner Brothers cartoon. If violence bothers you, this might cause some issues. If you can set that aside, this game is easy on the eyes. The detail is also impressive, from the designs of the enemy armor and equipment to the way that different enemies move or interact with the environment.

The audio is replete with nice medieval-esque music and a variety of appropriate sound effects. Enemies utter a dwindling cry as they are dropped into the pit, exploding barrels detonate with a well modulated thump leading to collective cries from soldiers caught in the explosion. The audio enhances the cartoony feel, making this violence laden game seem light and playful.

Knights Onrush has an impressive amount of replay value, as the main game is broken up into roughly 12 stages composed of several levels each. Additionally, the game offers Endless Siege, where enemies rush at you in much larger groups then the Campaign mode, and Madness mode, which is just what it sounds like. This game has a lot going for it; colorful graphics, good sound effects, fun and challenging levels with a lot of added replay value, and most importantly a $5 price tag. If you’re a fan of a fast paced game with a medieval theme, Knights Onrush is your game.