I have a confession to make: I never played any of the previous Alien vs. Predator games. I am as wary of licensed games as many others are, especially when said game combines two properties that really have nothing to do with one another. Despite all of this, Alien Vs Predator ended up being the most interesting first-person shooter that I saw at E3. Imagine my surprise.

AVP is split between three campaigns: that of a human soldier, a Predator, and an Alien. All three will encompass one complete story, but you can experience it from varying points of view through a set of species-specific missions. The first demo that we were shown was from the human side, which was a curious choice considering that it fails to capitalize on the greatest strengths of the brand name and looked like a fairly typical sci-fi/horror FPS at first glance. The level took place in a dark industrial setting, with the player throwing flares to brighten up areas beyond his flashlight. The flare landed underneath a staircase, showing off some really impressive lighting that brings to mind the entirely orange and black aesthetic of Alien3. Since the flares are your only source of light besides the flashlight, you are forced to make their placement a tactical decision. At this point, I was still fairly unimpressed, as everything that I had seen looked a bit generic. "You roam around metal corridors fighting monsters," I thought. "How original."

All that changed once a pitch black Alien silently emerged from the shadows, leaping at the screen. The audience twitched as the PR guy–who had been demoing the game all day–died from this attack. "Where they come from is randomized" he noted, before trying again. This time the alien came from the same basic direction, but a little higher up. The creatures are very hard to see, so even the slightest change in trajectory can throw off your game and force you to squint to make out their shape against the shadows. The marine popped off a few rounds, but the Alien was too close to him when the bullets struck. This caused the creature’s acid blood to explode onto the screen, which would probably hurt like hell and cause you to go blind in real life. Since that wouldn’t be too much fun in a game, the on-screen acid sizzling ends up being one of the best vision-obscuring effects ever rendered.

After killing the first Alien, another one dropped onto the soldier and triggered our first look at a melee battle. During these sequences, the monster is in your face and about to bite you to death. I asked if this was a QTE, but they said that they were still working out how exactly to handle the parrying during these close encounters. 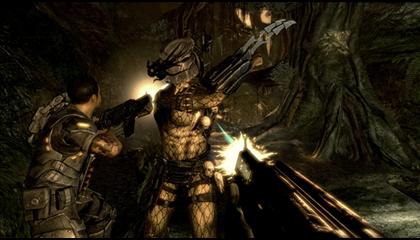 Things got even more interesting once we saw a demo of the Predator campaign, which was set in a jungle being explored by a group of marines. The Predator plays far more stealthily, cloaking himself while stalking his prey. The creature has vision modes at his disposal that can track humans and Aliens easily, as well as a scanner that tells him what weapons the enemies are holding. These tools make it easier (and more fun) to draw a bead on your targets. His most interesting move is in his jumping, as he can mark a destination with his crosshair and then automatically leap to it. This simple but efficient design decision negates the biggest bugbear of first-person platforming, where the inability to see your feet makes it difficult to land your jumps.

Predator’s stealthy tricks don’t stop there, as he is also able to lure men away from their posts by shooting a sonic emitter. Once the Predator had his prey alone, he leapt up behind him and performed an absurdly gory finishing move called a "trophy kill." The hunter impaled the soldier by driving his Wolverine-like claw through the bottom of the man’s chin; just one of the plethora of finishing moves that the developer’s are promising will be included when the final game is released next year.

Predator then made his way further into the jungle to fight some of the Aliens. This sequence resembled a more traditional action game, where Predator had to hop around trying to clear some ground between him and the creepy little buggers. Given the unique jumping controls and vision modes, even these encounters take on a life of their own when compared to standard shooter fare.

While we weren’t able to see any of the Alien campaign, everything that we did see of AVP is shaping up nicely. The multi-viewpoint narrative structure was truly intriguing, and the way it switches gears from hunter to hunted to really hunted is a novel concept. The game is similar to Chronicles of Riddick: Escape From Butcher Bay in a way, which also features a unique blend of hunting, shooting, and stealth. The difference is that Aliens vs. Predator features better graphics, a multi-perspective story, and H.R. Giger’s acid-spurting Aliens, which explains why I am so excited. If the E3 demo was any indication, AVP could be the rare licensed game that surpasses not only its source material, but also the competition in the same genre.