It surprises me that westerns settings aren’t more common in video games. Compared to a market ready to burst with bald space marines and WWII nostalgia, few games feature the American hallmark of the cowboy. Call of Juarez: Bound in Blood brings this strangely unexploited world with a vengeance, being not only one of the best Old West games, but one of the most solid shooters released this year.

Bound in Blood is a prequel to the original Call of Juarez which released on PC and the Xbox 360 in 2006 and 2007 respectively. The game follows Ray, Thomas, and William McCall (Ray also appears in the orignal). As the game begins, Ray and Thomas are soldiers fighting on behalf of The Confederacy in the Civil War. Fearing for the safety of their home, they desert. A series of tragic events soon exiles them from their plantation in Georgia, setting them on a quest to find the mythical Aztec treasure of Juarez. The story is in no means revolutionary, but it is entertaining. Told from the perspective of William, who detests the violence perpetrated by his brothers, it remains interesting throughout, even if it relies on any number of cowboy clichés. 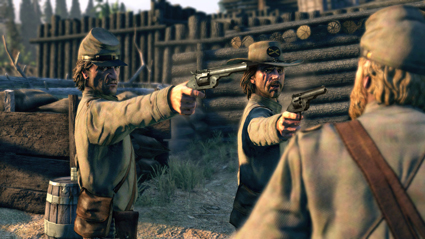 The single player campaign is good. The levels are linear, though a few offer a limited open world. Each chapter of the game begins with a short story clip narrated by William, and then transfers to a player-controlled Ray or Thomas. Most stages offer a choice between the two brothers. Selection between the two changes the experience slightly (different weapons and routes), but there isn’t much difference between the two. While they use different weapons, you’ll resort to the same guns regardless of character. Aside from slightly alternate paths through each level, you’ll notice little difference playing as Ray or Thomas.

Bound in Blood’s biggest pitfall is its lack of variety. There several weapons in the game, but few are useful. The only variety you’ll find with the enemies is a change of clothes. The levels are desert, desert and more desert. You had better like the standard western "walk ten paces, turn and fire" duels too, because just about every level ends with one. You’ll have seen the majority of what the game offers by the end of the first few chapter.

If you don’t mind repetition, Bound in Blood is a treat, simply because the game is fun to play. Storming a saloon with a pair of six-shooters never gets never gets old, and picking off a bandit with your rifle on horseback is just plain fun. It doesn’t hurt that Ray and Thomas are genuinely amusing. The game makes no qualm about their being immoral scoundrels. They cuss, kill, screw, and enjoy every minute of it. While you’ll hear a lot of the same lines over and over again, their back and forth banter will often illicit a chuckle. 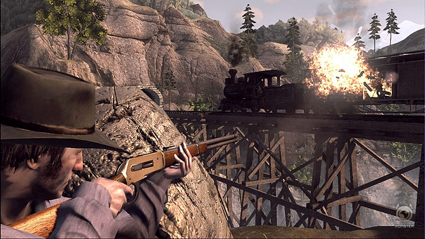 As overjoyed as some may be that Bound in Blood actually focuses on a single player campaign, others might be disappointed to find the multiplayer is okay at best. The western locales are a nice change from the constant slew of militaristic, sci-fi settings that dominate the genre, but the multiplayer is lacking when compared to other FPS games on the market. The modes are basic and while it has a class system, it isn’t as deep as other recent class-based shooters. It’s not bad, and some will choose it just because they love the style. If aesthetics aren’t your deciding factor, though, better options exist.

Speaking of aesthetics, Bound in Blood is a nice looking and sounding game. Character models and environments are well detailed. Voice acting, battle sounds, and music all fit perfectly. Some visual glitches appear on occasion, but if unless you’re a stickler for perfection, they’re barely noticeable and don’t hinder the game.

Bound in Blood isn’t a perfect game, but it is still one of the most fun and unique FPS games released in 2009. If you want to re-enact all your John Wayne inspired fantasies, you won’t do better than Call of Juarez: Bound in Blood.