In this week’s editorial piece Stew Shearer contemplates the fate of a genre that’s lost in space.

For a brief period of my life I was a PC gamer. It’s funny for me to think of it, given that PC gaming just annoys the hell out of me. I’ve always valued the simplicity of a console in comparison; you stick a game in and it works, no fuss or constant hardware upgrades required. That said, back in the day (some day in 1996 to be exact), console gaming had kind of lost its luster on me. That’s probably to be expected when you’ve been playing a NES for five years – my family simply couldn’t afford a SNES of our own (Aww – Ed).

Somewhat ironically, after my parents split up and money thus became shorter, my Dad bought a computer. It was a used one, with several games left with it by its previous owners. I can’t even imagine what Jack Thompson and his ilk might have said if they’d have seen a ten year old me playing Duke Nukem 3D. It’s rare to find a kid that age who knows what a nipple tassel is, but thanks to the Duke I did (Aww – Ed).

Of all the games that I played back then, there was one that stuck with me far more than others, and it went by the name of Wing Commander 2. Up until Ocarina of Time, I thought it was the most spectacular thing I had ever played. Here was a game that had it all; exhilarating, challenging gameplay, lush hand-drawn visuals and probably one of the best stories ever to grace a game. Indeed, the entire Wing Commander series (exempting Prophecy or course) was a tour de force of video game storytelling, and though the franchises’ flaws have been trumpeted for years upon years now, it remains one the very great game series. 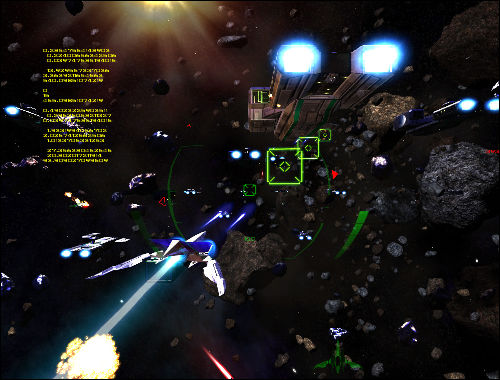 Shadows of Lylat provides something that lives up to the Star Fox name, albeit unofficially.

A very great game series that has sadly died off, it seems. The last release for the Xbox 360 barely merited the name, and actually had the stupidity to draw on the Wing Commander film for some its source material. The thing is, though, that it isn’t just Wing Commander that has died. In the 90s the space flight sims like Wing Commander, X-Wing, and FreeSpace may have been the cool kids in the park. But that genre’s been absent from the mainstream for a long time now. The last game to fit that bill that I can recall playing is Starlancer, and even that game is almost ten years old now.

I am of course being a bit too pessimistic. There have of course been some releases, and the genre actually does reasonably in some countries outside of the US. Furthermore, there are quite a few indie and underground studios developing and releasing not just new games but unofficial sequels to old franchises. Wing Commander Saga, a game built on an enhanced version of the FreeSpace 2 engine, takes players back to war with the Kilrathi. Vega Strike is a space sim in the style of Privateer and Elite that allows game to take on space as a mercenary, trader and bounty hunter. Some of these new games have even earned some brief time in the spotlight. Shadows of Lylat, for instance, is an unofficial entry into the Star Fox games, and looks to produce a next-generation space sim experience built around the various conflicts that have plagued the titular Lylat star system.

While these games are of course nice, the question remains as to why responsibility for furthering this great genre is being placed in the hands of independent developers. This generation, every other game seems to be a first-person shooter, so wouldn’t it be great to see someone take the reins and build a game with the sort of luster and expanse that we’ve come to expect from the big studios? Space sims aren’t dead yet, but they’re certainly limping along now. I doubt that I’m the only one interested in strapping themselves into a virtual cockpit and jetting out for some epic, interstellar carnage.