Role playing games on Xbox 360, or any Microsoft platform, is a rare accomplishment. So it’s usually hoped for that these rare gems will shine the most after their development on such a system as this. While the 360 will be receiving a lot more RPGs (later this year) than its former unit, Enchanted Arms is one of those gems that we currently have. Enchanted Arms has become my favorite turn based strategy (TBS) since the Final Fantasy series. Offering the somewhat typical JRPG fashion, with dozens of artificial humanoids called “Golems” to collect and use to fight in battles throughout the game. Enchanted Arms adds to your average TBS with a combat system similar to Final Fantasy tactics, and most accurately, Chess. This unique system helps keep the game play fresh and interesting throughout the game. Removing the “repetitiveness” that most TBS styled games will build up after hours of game play. At times the dialog will draw on, but the game play quickly picks up and carries you off soon after. With your classic story of good versus evil and the story of an unlikely hero, Enchanted Arms, continues to recreate the game play with an original cast of characters who will make you cry, make you laugh, and yes, even scream and pout in annoyance.

Enchanted Arms is the epic story of human potential. Their unyielding strength and courage, buried within even the most foolish and weak of us all. Enchanted Arms takes place a 1,000 years after the “Golem Wars”, the greatest war ever conceived. Fought by artificial humanoids, who where given their orders, and would carry them out until they where ripped to pieces and lost all magic that kept them running. Devil Golems, Golem Overlords of unlimited power were also created, to hasten the end of the war. But all they did was negate each other and cause more damage in the end. One day, the Golems just stopped. Powered down, or where imprisoned, but most of them and their destructive nature faded to memory; even the cause of the war. But the magic still exists. Wielded by mages known as Enchanters, and their power has awaken the Devil Golems once more…. 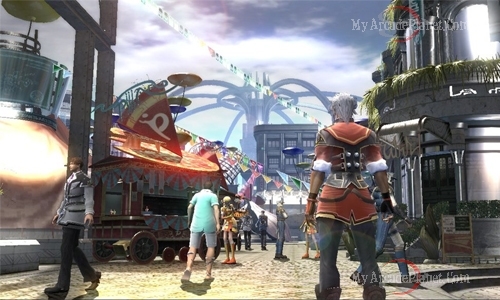 Thank God there is Pizza in ever alternate reality.

Presentation is rather simple. You won’t get lost easily in a level, but I’d suggest the use of a guide to find the location of all Golems, Skills, and Save-point/restoration/shop stations, etc. Again not a linear design, but there are several locations where skills may be hidden in each level, and you can easily walk past them, or spend hours trying to find them. And many are well worth equipping to your characters for ultimate destruction power. The battle system takes some adapting too, but is ultimately simple. It’s the attacks which will change up your strategy and positioning in battle scenarios. The first hour or so of the game your in-game buddies help explain, and in excruciating if not just painfully obvious detail everything you need to know about your control scheme. Long story short, it’s a simple lesson, with a short leaning curve, along with a simple to use party options menu, and character options. Equipping new skills can be as easy as an “on/off” function, so increasing your parameters, or purchasing new skills is only a minor extension on an already simple control and battle scheme. 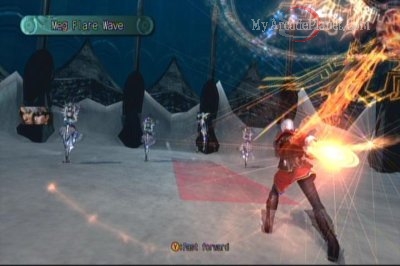 The graphics are a bit sub-par but still some of the best experienced to date. As far as in-game visuals are displayed, they are rendered to great detail, and texture. The environments are just amazing for such a large game. I know Gears of War, and Lost Planet later introduced a new standard of level concept, but for a game which released months before hand and offers over 30+ more hours than these two games, each level, and location is developed to an original and often unique design. Now some “broken” structures are often portrayed too blocky or flat/ too angular for something that should look torn, shredded, cracking. This is a minor detail complaint, as you often only encounter such objects when they are blocking your path on a set course. Characters and attacks are generated with amazing visuals. The EX attacks (Super skills if you will), pull you into a short animation where visual enhance to draw attention of the focused power the character is unleashing, and then focusing in a direct and powerful attack on its enemies. I just love Atsuma’s “Mega Phoenix”. A burning Phoenix is summoned from pure magic remnants, and then unleashes a blazing rain of incinerating fire upon its victims. The cinematic are pre-rendered, presenting us with the ultimate experience of the plots most devastating and powerful climaxes. Many are few and far between, but memorable to the end.

Sound really depends on your settings. Most of the sound focuses on the voice acting, as that is most the story, discussions. The English dub was pretty bad. I give props that the voice actors did a good job, and at some points they do falter where they their emotion does not fit the scene, overall they carried out a good job portraying their characters. From the gleeful trigger happy golem hunter Yuki, to the stereotypical flamboyant Makoto. (That’s right he has a queer eye for every guy, and a strong sense of fashion). However the English dubbing was poorly applied, so the voices do not often match the lips. And then there are many points where there is no English dub, the lips move, and the sub titles continue, but there is no verbal conversation. The music is okay, but you have the same animation sounds whenever you encounter a random battle. And as there are 1000’s of battles this is really repetitive. Fortunately each location has its own tune, and beat depending on the environment you are in. I’ll never forget the end when you are approaching the castle of the Queen of Ice, the fairy hum, and sounds of shooting stars, makes the location put you at ease as you feel as though you are actually approaching Cinderella’s castle at Disney Land, and this is where all magic comes from.

Game play is amazing. As a fan of TBS’s this is one title I felt helped expand on an otherwise familiar genre. Gamers will trek through miles of vast environments; from secret underground sewers to garden oasis atop lavish mountains. In this course you’ll be pulled into random battles, enemies will of course vary by locations, and battles take place on a grid system. Set up similar to Chess, you will have your characters on one side, and the enemies on the other, with a line in the center of the grid that neither may cross over. Each player has an array of attacks; that vary in effect. Not just power but range as well, and what squares on the other side will be hit by the attack. Used in combination with team attack, or support abilities, the attack combinations are endless. Overall this helps keep the game play fresh and from becoming too repetitive. Now while the random battles may seem tedious over time, they are inevitably essential. You’ll want to keep boosting your parameters to the extreme, and level up frequently to increase the effect of your powers. Random battles can be won easily, but the boss battles are another war entirely. The rare adaptations of an online battle mode, is also quite interesting for this game. Gather your party, and then challenge others players like yourself online in more Golem Battles.

“Would you like to think about this before I woop you”

The replay value is rather low for this game, but circumstantial to any end. There are a few side missions, mainly exploring the “Temples, and Shrine”. However they are not part of the main plotline and may be skipped over without losing out on plot or achievements. One advantage to exploring these ruins is obtaining some of the most powerful Golems in the game for your own personal use. And they add hours of extended game play. Now maybe you do these missions on your first time through. Or you can come back and do them later, after completing the game. The only thing you must be careful of on this last note is once you complete the game you cannot come back to these locations. So you want to load up or reserve a game save before the final battle(s) at the games end. Or if you want to make it your goal to acquire all Golems and Skills, or max out your stats.

Again, the online battle mode helps introduce replay value to a genre that usually does not have much. I mean honestly, after beating a 60 hours game how often do you replay them to complete the same task?
Anyways, the online mode does help add replay value. But like the shrines and temples, there are no achievements for this either. So few people are actually active online, limiting the replay value feature further. That and most gamers tend to (of course) use the most powerful characters, or simply “Omega”. And then the battle just becomes a matter of “he who strikes first, inevitably wins”.

Overall, the game was hours well spent. I loved all the unique Golems, and attacks. The Grid combat system was original and helped revamped such a common genre. The story was amazing, with a cast of original and sometimes annoying characters. The dialogue was very casual at times, and tended to discuss real-life matters, rather than focuses so much on their fictional journey at hand. Which helped make the story seem more…real, while remaining purely fantasy. A nice shot at replay value as well proved the developers where making a strong effort on the game, and showed that such titles have more potential than what most developers actually apply in the end. It’s one game I’m glad I played, and enjoyed every minute of it.