Mothership Zeta: an unconventional title for the most unconventional Fallout 3 expansion. The previous expansions offered stiff competition, giving players live-fire military simulations, the radioactive ruins of post-war Pittsburgh, Washington’s subway system, and religious fanatics and mutated swamp dwellers. In Mothership Zeta, Bethesda takes players above and beyond, right into the void of space.

The story of the game is as follows: another radio signal is activated, pinpointing the location of the ominous Alien Crash Site players may have already discovered. The player is quickly sucked up into the sky upon arrival, immersed in a shimmering green light. Le gasp! Abduction! Fortunately, players carry both items and allies to help throughout this adventure. 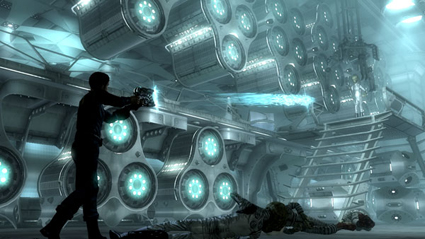 This DLC offers three quests and about four hours of game play. Zeta is challenging, particularly for those topped out at level 30, as numerous aliens and potent weapons make for hard goings. I used about 60 stimpaks just to keep up with the new weaponry. Fortunately, the alien ship contains numerous arches that heal, and players can acquire bio-gel that heals 180 HP at at time, though not without side effects.

Zeta also requires a combination of techniques to get through successfully. Narrow corridors impair stealth-based characters, whereas the large numbers of aliens, robots, and other enemies make fighting a tricky proposition. This DLC requires brain power. Players know their objectives; getting there takes some thought.

Very little content in this DLC is recycled. Environments, characters, and voice actors are almost entirely original. Zeta’s visuals maintain the DLC’s high standards. The shimmering effect on the aliens’ uniforms, the blazing of the sun through the bridge windows, and the light show of combat are a novel treat for the eyes. Weapon design is imaginative, like the Shock Stick and the Drone Cannon, which has two sparking wires sticking out of the right side, as if freshly torn off of a combat robot. Characters with any weapon skill will be able to find a complimenting weapon. Alien Epoxy keeps these weapons running, instantly repairing guns without needing another to sacrifice parts.

The audio, excepting a few samples, is all new. Bethesda pulled in a new group of voice actors and even concocted a new language for the aliens to speak incoherently. An actual Japanese speaker plays the role of the captured Samurai, Toshiro Kago, which earns Bethesda a special nod. It’s the same quality experience, but with a few new (and historically correct) twists.

I really liked this DLC. While I died more than in all the other expansions combined, but it was a fun trip. New enemies, unique environments and characters, and engaging (if over-the-top) story kept me playing all the way through. While this is unfortunately the last Fallout 3 DLC, it at least goes out with a (literal) bang.