It perplexes me how development teams can spend so much time polishing their product, yet miss the mark on fundamental aspects of game play. As the iPhone grows and its owners spend thousands of dollars every week, the piles of dollar-squeezing shovelware obscure the few jems in the mud. 3D Hunting: Alaskan Hunt is exactly what I’m talking about.

I’ve got to give it to the UI designers at MachineWorks Northwest. The menus are polished and easy navigable, splattered in an ice-blue hunting theme. Unfortunately, this is about all I can praise. At the first hunt, players are presented with a standard rifle, a surrounding of trees, and a gaggle of deer to mercilessly and repeatedly assassinate. Sounds good on paper, right? Sadly, problems surface with shot one. 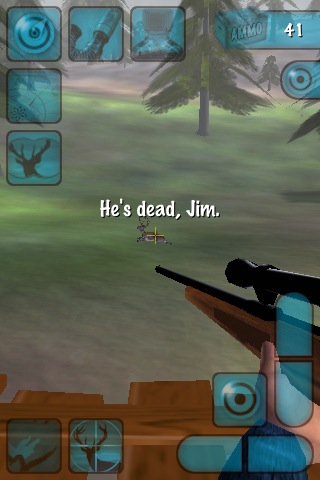 Alaskan Hunt’s most flawed aspect is its unintuitive, borderline retarded controls. Simply aiming the cross hair is tedious and sluggish. Instead of opting for the popular (yet flawed) virtual analog stick to handle the X and Y axis with one thumb, MachineWorks takes a step backwards and provides four arbitrarily placed buttons that move the gun in four directions. What’s worse, both movement and firing of the gun are controlled with the same thumb, leaving ol’ lefty with the only task of pointing straight down.

Fortunately, and I say that with the most sarcasm I can convey in text, the animalian AI allows for the easiest of shots, perhaps countering the ridiculous controls. Bambi just stands around until either killed or feels lead flying past at a thousand feet per second, at which point it actually runs closer to the gunfire. If a 14-point is running for the hills, just fire a warning shot. He’ll know that if he doesn’t immediately surrender, you’ll curse him a good one from afar since the player can’t move. It’s either programming laziness or nostalgia-inducing genius, as the deer react to each missed gunshot by moving in the opposite, yet predictably obvious direction, like our beloved NES lightgun-fearing fowl.

3D Hunting admirably runs at a steady frame rate, and looks decent for an iPhone game. The animations are fluid, and I dig the user interface. At first glance, players would assume the game has some production costs behind it. There’s even a credit system that accumulates deer skins which can be used to purchase interesting but useless upgrades. Once players grab the sniper scope, they even unlock a bad ass bullet-following camera view that shows exactly where the target’s hit in the most painful way. While murdering more types of animals in the Alaskan wilderness would’ve been nice, no one can complain at 99 cents.

It’d be spiffy of MachineWorks to release a patch with at least a virtual d-pad, though an open-screen swipe mechanic would work beautifully since the character never moves. Even though this 3D hunting experience boasts accurate wilderness sound effects and an icy-cool theme, its broken controls and just barely functional four-legged wanderers turn the experience into a snooze-fest. Come to think of it, 3D Hunting: Alaskan Hunt emulates real hunting better than I thought.