Patrick got the chance at this year’s BlizzCon to talk to StarCraft 2’s lead designer and fan-favorite Dustin Browder about all things StarCraft, from the mod tools to space cowboy music.

TGR: Most real-time strategy fans believe that the genre has become stale, creativity-wise. Will StarCraft II be doing anything big to try to reinvigorate the genre?

Browder: That’s a matter of perception. Our focus has always been on creating a quality gaming experience. We don’t really worry too much about what feels stale. In many ways our multiplayer harkens to the original game. We’re focused on capturing the magic of that original experience, because it was so great. At the same time, we’re focused on creating a lot of new strategies, while keeping some of the same. So far I think we’ve walked that line pretty well. I don’t know if it’s innovative or not; I don’t think it is, but I don’t care either. We just want to make a really great game for the multiplayer experience. [Regards] the solo player experience, we are doing a lot of new, crazy stuff. With our story mode there’s a lot more player choice. You can choose which missions to play, how some plot lines will end, what kinds of technologies you wanna get, how you want to upgrade those technologies, the mercenaries you bring into battle, the research you want to do. Lots and lots of choices for you in the story mode experience. On Battle.net, we’re obviously hoping to innovate by providing more of a service for our mod makers, to really be able to allow them to make some really great content, [so that] at some point down the road [they’ll be able] to be paid for the content they make. They’ve done amazing things with no resources. What will they do with resources? I have no idea. It’s exciting to imagine. We have a tool that’s way more powerful than any tool we’ve ever had before.

TGR: That tool will be made available to…

Browder: Oh yeah – during beta, at some point, we’ll put it out there. I’ve got a panel right after this where I am gonna show some of the crazy stuff we’ve done with the tool. This [the Blizzard team] is not a legion of fans. This is a handful of smart guys in an office, in their spare time, and they’ve done a few crazy things. When the fans get a hold of it, oh my God. They’ve invented the Defense of the Ancient gameplay type, which is now a genre. Major developers are trying to emulate and trying to capture that magic, and not always succeeding. They invented Tower Defense, which Plants vs. Zombies owes a huge amount of its design vision to. These people are inventing genres of games using what we now consider a fairly primitive tool. Warcraft 3 was a great tool, but now we’re making a better one. Should be some exciting stuff. To your question though, is the genre dying? I don’t know, I think it’s pretty cool. I still have fun playing a wide variety of RTS games, and I get frustrated that the first-person shooter guys don’t get that question. What has really changed [for the FPS genre]? It’s prettier. But somehow RTS is dying. We can’t make good games? We have to change everything or the game stinks? No, we’re making cool games. Dawn of War 2 was cool. It is what it is, we’ll see what happens with the genre over time. All we really do, from the trenches, is just make the best games we can, and see how the public receives them. 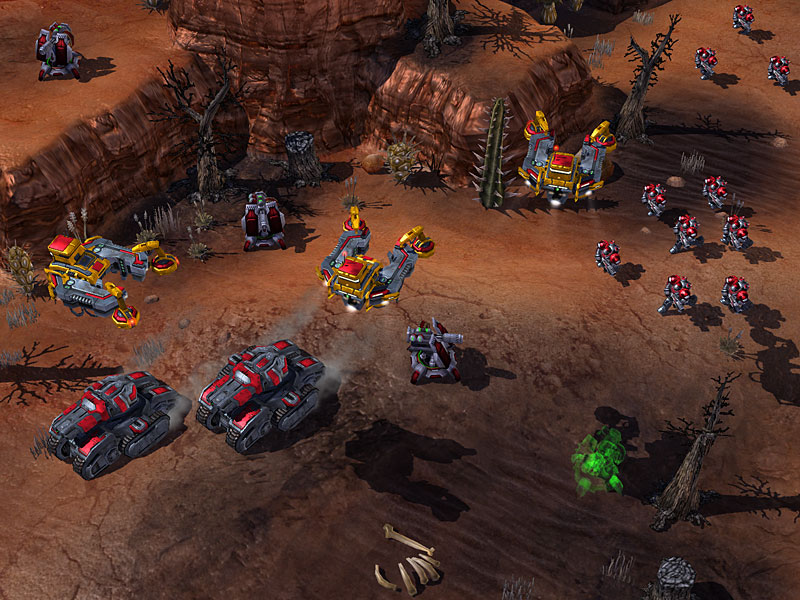 Will StarCraft II see something to rival WarCraft III’s Defence of the Ancients?

TGR: You mention the multiple objectives and the overworld. Let’s start there. I noticed as I was playing the campaign in the press room that you’re actually able to converse with the characters before you go into the mission. Is that more mission brief jargon or backstory?

Browder: It’s really just more immersion for the story. We sometimes have some missions comments in there; characters will react to what just happened, or make some suggestion about missions you should do next, or discuss the threats. For the most part it’s more reactionary to what just happened. It’s to let you know how these characters think and feel about the universe that they’re in – this terrible, nightmarish universe that they are fighting these battles in. We are trying to give you more of the story. The original StarCraft had these portraits…

Browder: Right. But it was actually huge then: "wow, there’s actually story here." It was really primitive, but it was story. Then in Warcraft 3 you had some more tech. Now we actually had 3D models, so the characters could move and fight stuff. They could touch each other and run away from each other. You had a sense of space. But it was still at a level where you couldn’t see the face, the emotions. You can’t really do anything. This was the next logical step for us. Now you can see what they emote, what they think, what they feel. You can watch the pain in Raynor’s eyes where he decides: "do I euthanize and infested world or do I save it?" That’s an interesting moment for him and you can be a part of it. You can see his reaction. It gives us a lot deeper experience with these characters. It lets you understand who they are. It’s a much more immersive experience.

TGR: In the overworld itself you have to go into the campaign selection. We’ve only seen two missions so far…

Browder: It goes up to four missions at once, there’s actually a way to unlock a fifth.

TGR: If your perform well, or something like that?

Browder: It all depends where you are at in the campaign, and how you do.

TGR: Do you go down separate paths by what you choose?

Browder: Well, no. It depends what you mean by that. We don’t generally lock off missions. We’ve got 29 missions in the overall game. We don’t close you down…there are a few places where we do. It’s a little like World of Warcraft: "Oh my God, my sister was kidnapped! You have to help me – right now!" Actually, if you come back in six months, he’ll still need that sister rescued (laughs). We’ve got some of that. We do have a couple points in the game where – we make this very obvious when this happens – characters will come to you and say ’I want you to help me’, and another character will say ’I want you to kill him’. You need to make the choice, and those are the significant choices. Those are where it’s really real. That changes the ending for that plot line, that changes the fate of that character, and fundamentally alters who’s on your ships, who’s been killed. It changes what happens. The ending is still going to be the same. We want it to end in a specific spot so we can begin the next game there. It makes for an official StarCraft II storyline, but the middle is yours to play with as you please.

TGR: Different missions also have different rewards – not only monetarily, but also through scientific research.  So, does completing bonus objectives have any impact on the rewards? Does it give you more money? Better research?

Browder: We haven’t decided on money yet. We’re a little skittish about it. I don’t know which way it’s going to go, but we’ve talked about the money rewards [being] based on the mission. The research stuff is based on the bonus objectives. We could decide to go the other way. One of the things we’ve been worried about is better players just getting better: "I just completed the second objective, so now I have a bunch of extra money. I can easily complete more secondary objectives." We want you to be stretching for those things, not to make it easier for yourself. Certainly the resource stuff, which can unlock some very powerful technology, is based on secondary objectives. Our philosophy is a little contradictory at this point. We’re working on it, though.

Browder: We put most of those changes in there to make the game more modern. There’s stuff we couldn’t do in the past, now we’ve got the engine so we can totally do it. At the same time we are trying to make the controls as tight as we possibly can. We want the maximum amount of controls. We’re not necessarily going for less clicks, but if less clicks is correct, then we are allowing it. Queuing more guys is totally great. We have this thing where you can select multiple buildings now, which is a big deal to a lot of our fans from the original [game]. We still require you to make a single click for each build that you wanna make. If you want to make three marines and two marauders you go one-two-three (taps table), marauder, marauder. You get the control you want. At one point we had it set up so you’d just hit marine once, and you’d get one marine in all five barracks, which is powerful, but bad control. It encourages sloppy play, and it wasn’t always what you wanted. We’re trying to find the line between playing the game for the player, but giving the player the controls he wants to play the game how he wants to play.

TGR: So you tab through your options to select the building you want?
Browder: Every click just moves the unit to the next barracks.

TGR: Oh, so if you have five barracks and you hit it fives times you get one in each?

B: Yes, but in the case of the tech reactor (an upgrade to the barracks that allows you to build two units at once), we do require you to tab through. Because those are very different buildings. We force you to make the choice, because that is a choice you need to make. We don’t want the game to play itself for you, but we do want you to have the power to make the right choices.

TGR: Regards the music, I can’t help but feel that it is a lot like Firefly & Serenity during the Terran campaign.

Browder: Interesting. They do certainly have similar roots. They both are cowboy, frontier space [universes] – you won’t see that as much in the Zerg and Protoss [campaigns], of course. Both draw from similar source material. Raynor was a marshall. He was on a backwater world. All civilians talk like hicks, they talk like southerners. We have had a lot of western themes throughout this game for years and years. We are just continuing that.

Browder: Yeah, you are gonna see some similarities, but it’s not really intentional. We are just drawing from the same source material.

TGR: Thanks for your time.

Browder: Thank you for coming.

Although no official release date has been announced, StarCraft II: Wings of Liberty is anticipated to release on PC & Mac in the first half of 2010.