Patience is a virtue. The interactive opening to Batman: Arkham Asylum will remind players of this adage as a moody, player-controlled Batman strides behind the maniacal, captured Joker. While the caped crusader escorts his loathed nemesis back through the confines of the continually lax mental hospital, developer Rocksteady introduces their interpretation of the titular institution: dark corridors, depressing decor, dangerously low ceilings, and a constant exhibition of misery. There’s a ruined majesty to the grand architecture, with buildings presented as dilapidated concrete halls mashed together with high-tech prison facilities.

While inmates perennially try to worm their way out, gamers will relish their incarceration.

In an attempt to extend Batman’s stay in Arkham, The Joker breaks out of his restraints and, as a lunatic taking over an asylum would do, frees the rest of the inmates and traps Batman inside. The expansive institution becomes Joker’s playground and generic videogame tropes are transformed into warped environments from insane villain’s minds. Players have never experienced a more justified sewer level.

The setting is more comic book or cartoon than Christopher Nolan movie. Anyone reared on Batman: The Animated Series will enjoy Mark Hamill’s cackling and goading as the Joker, and Kevin Conroy’s rasping, gravelly tones of The Dark Knight. The game also follows a script penned by series writer Paul Dini, ensuring an authentic, satisfying channelling of the Batman ethos with numerous tasteful references. It’s frequently harrowing, especially in later stages, showcasing Batman’s obsession with his parents’ death more than any of the movies. The game highlights that Batman is just as nutty as the villains he apprehends. 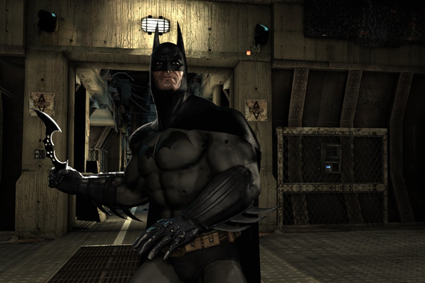 Combat, the meat of the game, is handled in two ways. The first (preferable) method is the direct approach. By pointing in the direction of an enemy and pressing a button, Batman will leap in their direction and perform a brutal melee attack. When enemies prepare their own offensive tricks, tapping another button will counter it. The obvious temptation to mash buttons is quashed when the game reveals – in typical Batman fashion – that patience is the key to success. Players must keep their fists steady and nerves calm to rack up forty-hit combos against packs of helpless goons. After acclimating to the mechanics, players can plunge, cape extended, directly into a group of thugs and patiently dispatch them. Batman is brutal and elegant fighter. His well-animated moves exude a deadly grace almost unbefitting of a man of such muscular stature. Playing to the game’s strengths, there’s even a slow-motion, bone-crunching takedown on the last of every group of guards.

Occasionally Batman runs into a group of armed henchmen and must adjust his approach accordingly. Underneath the cowl is a human being, just as susceptible to two clips of machine gun fire as the rest of us. In these instances Batman gets wily, staying out of sight and grappling his way onto stone gargoyles to survey his adversaries from a superior vantage point, or dangling down to scoop up unsuspecting goons. That’s not the only trick up his sleeve. He can spray explosive gel onto surfaces and trigger it when people walk past, yank enemies off ledges with his batclaw, and knock his foes to the ground with batarangs. As a last resort he can even glide down and give enemies a good kick in the face. 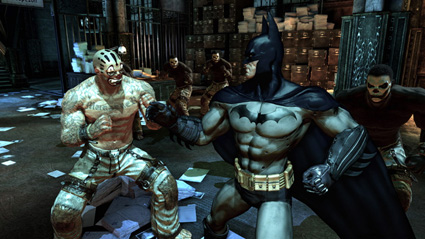 As the game progresses, stealth sections become more complex. Enemies obtain collars informing the rest when they’ve been dropped and, in one instance, the gargoyles become booby traps. These sequences become less interesting when the game pushes these sequences beyond a simplistic and satisfying way to prey on armed foes. Thankfully, these instances are uncommon.

Most of the game is spent in ‘Detective Mode,’ which highlights interactable features of the environment: skeletal outlines of guards, ventilation grilles that beckon, destructible walls, the ever-important gargoyles, and occasionally mission-specific trails that direct Batman to the next target. 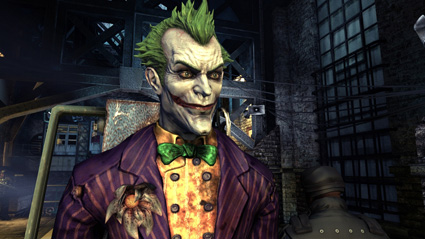 The game feels authentic because Rocksteady never forgot that underneath the gadgetry, muscles, and ninja skills is Gotham’s greatest detective. Batman is a thinker, and when presented with stronger foes, he’s patient enough to wait for them to make a mistake. He belongs in the shadows, and Batman: Arkham Asylum puts him there. It’s a shame that the game’s bigger enemies can be distilled to pattern exploitation, though this is forgivable considering the incredible encounters with Scarecrow and Killer Croc.

Licensed games often do nothing but ride the coattails of their property, ultimately rushing to the market to coincide with a movie release. By creating an excellent game first, Rocksteady set a new precedent with Batman: Arkham Asylum. After creating a great gaming framework, adding a character like Batman completes the experience. Batman: Arkham Asylum works so well as a whole because the game compliments its iconic character.