All gamers like a dash of challenge in their games; it’s what keeps our minds sharp and reflexes honed. Dot Matrix intends to keep gamers on their toes with the big bang iPhone / iPod Touch app, KIL.A.TON. Names don’t get more descriptive than this. The app is a standard artillery game where players must put their knowledge of ballistics to the test in order to destroy opponents. This is operated by a touch screen interface, naturally, but that’s just scratching the surface… hopefully without scratching the screen.

The core idea behind KIL.A.TON is to blow the opponent into a hole in the ground. Don’t expect just one opponent, though; KIL.A.TON throws up to six different enemies at a time. This is challenging, requiring both speed and accuracy. Those looking for a low-key experience won’t find it here. Tp help the challenge, players don’t have to tackle these enemies alone, as the game offers a variety of weapons to help cut the opposition down to size. To paraphrase Winston Churchill, the game offers the tools, players must finish the job. 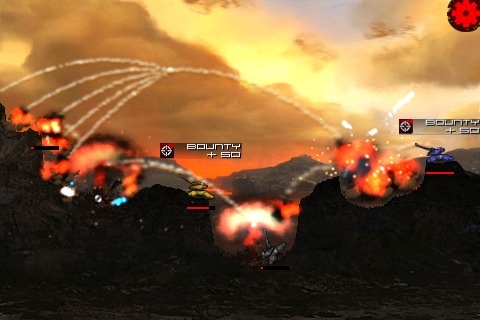 Graphically the game is up to snuff, but not an eye-popping experience in regards to the obvious things. When it comes to detail, though, this game is a good looking bit of digital simulation. There’s the muzzle flash as the ammunition is expended, the little flare from the tank’s jump jets players jink for position, and of course the pretty (but brief) explosion as the coup de grace is delivered. The graphics of this game won’t move anyone to tears, but the engine gives good account of itself.

Much like the graphics, the audio is narrow in focus, but represents well. Each type of ammunition sounds differently, from the solid whump of the standard shell, to the rapid whirrr of the minigun. The sound is well-composed but not extraordinary. Still, it doesn’t need to be. A dramatic military back beat accompanies each level, which helps drag players into the battle. 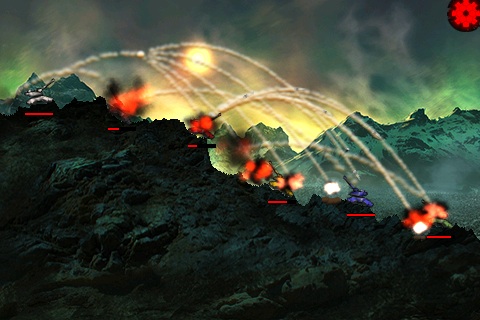 KIL.A.TON has a lot of good points, but there are some things that I don’t like. The controls, for instance, don’t work too well with a touch screen interface. When clicking a unit, a translucent wheel is superimposed over it, and this is what moves the barrel. It’s too easy for a finger to block the barrel’s movement, messing up the aim before a shot. Also, after firing, the angle of the barrel suddenly changes, even though nothing happened to your tank or it’s position. Another annoying bit: at the start of the level, players may be stuck between two enemies and blown away within seconds. What’s the fun of that?

KIL.A.TON isn’t a bad game, having a firm technical footing. However, the fidgety controls and the sometimes-unfair odds make this game less fun to the casual player. Either way, artillery game fanatics will find this right up their alley.