Playing through Batman: Arkham Asylum, I realized that while I loved hunting down all the hidden collectibles and solving the wealth of Riddler challenges, it didn’t make sense for Batman to be taking time out of his busy schedule to do any of that. True, this has been the case with the majority of games, but I never really noticed it until Arkham Asylum. Maybe that’s because it’s so well-presented, or that it all conceivably occurs in real-time, given how it takes place over the course of one night and a playthrough lasts an appropriate nine to twelve hours.

Either way, it became apparent that most games suffer from this flaw. When there’s an urgent quest or mission at hand, the player is often urged to use their limitless supply of time to hunt down doodads. Even games that don’t have collectibles or side-quests still give way to exploration simply by virtue of housing a game world that can be explored. After playing through Arkham Asylum, I felt compelled to reflect on games that have sidestepped this convention, and to consider how to integrate storytelling with the player’s urge to explore, which is encouraged by any virtual world. 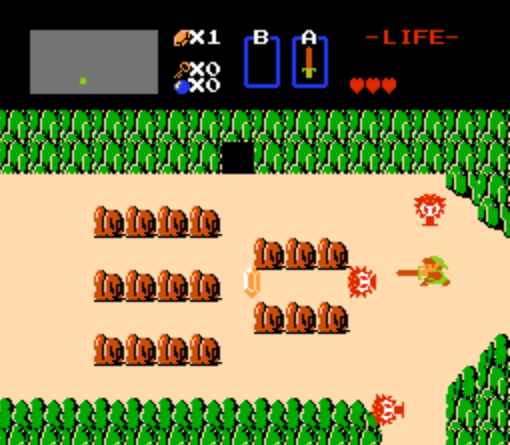 The Legend of Zelda’s world is expansive, exciting, and often very confusing.

The original The Legend of Zelda gets right to the heart of the matter. You didn’t explore it simply to find stuff, but rather because you were on a quest to save the princess, but had been given no instruction or direction on how to do this. Thus, there was no choice but to explore. There was almost no way of knowing if you’re going down the main path or not, outside of getting hold of the Nintendo Power map, so it never felt like you were taking time out from saving the world to collect goodies. Instead, every cave you explored was a possible further lead towards the main quest – and if it wasn’t, you probably found a nifty reward instead. Zelda was incredibly confusing at times, but at its core that lack of distinction between its main path and its side-quests was to its credit.

Appropriate exploration resurfaced in the second N64 Zelda title, Majora’s Mask, the platform provided in that game’s case by how it handled time. Unlike in most games, you couldn’t take your time in Majora’s Mask’s world, safe in the knowledge that you’d always arrive at the last minute to save the day. Instead, you had three in-game days to save the world, which constituted somewhere between fifty minutes and five hours in real-time depending on how much you slowed down time in-game. Fail, and you’d lose all progress made in that time. Rather than being a horribly frustrating, repetitious experience, you were able to revert back to the first day’s dawn at any time, keeping all the important objects you’d acquired in that time with you. This made it easy to make your way back to where you left off, and more significantly, provided the sense for Link to want to take his time to search for treasures to aid him on his quest. Simply put, Link literally had all the time in the world of Majora’s Mask.

A couple of other examples that justified exploration were Shadow of the Colossus and Tomb Raider. In the former, the main quest held no urgency as the objective was to resurrect someone – who obviously was already dead. Furthermore, Shadow of the Colossus had no true collectibles, so the central story never lost focus. It was an epic undertaking for protagonist Wander, so it made sense for him to take time out to smell the roses every now and again. By dismissing urgency and side-quests altogether, the game allowed you to admire its scenery without breaking its narrative.

Contrastingly, Tomb Raider justified our inner archeological tendencies because Lara is actually an archeologist. Sure, she’s trying to unravel some mystery or another and should probably stick to doing that, but it’s not hard to buy that Lara would want to scavenge her surroundings for hidden relics.

Heavy Rain’s world will be beautifully realized, but not truly explored.

On the other end of the spectrum, Upcoming PlayStation 3 title Heavy Rain looks like it will circumvent such notions by not allowing you to explore your surroundings at all. The game will proceed in real-time, and you will have to dictate various actions via quick, multiple choice options. Widely deemed as a choose-your-own-adventure movie, Heavy Rain will simplify your choices so that they all make sense in the story’s context. It won’t allow you to do goofy things like hop on people’s heads while they talk to you a la Half-Life; it may be restrictive, but it’s also consistent.

The aptly-named The Path embraced exploration-based storytelling. A reimagining of Little Red Riding Hood, The Path tasked you with guiding several different versions of ol’ Red to her grandmother’s house. If you stayed on the titular path, then it would be over in a matter of minutes. The real meat came from wandering off this path, and exploring the girls’ stories via finding objects that held meant something to them. Finally, here was a game that gave you proper reason to explore by telling you not to. While this had dire consequences for the girls – after all, curiosity killed the cat – it still made sense for both them and you to explore the game’s world.

Fallout 3 was a great success, no doubt based on its huge, unique game world.

In truth, I love exploring a virtual world. Scavenging Fallout 3’s Capitol Wasteland just because it’s there was the absolute best thing about that game for me. Finding Milla’s hidden memories in Psychonauts still ranks as my favorite secret discovered in a game. Being able to explore a game’s virtual world is surely one of the greatest appeals of the medium. Though it often comes at odds with being told a story, something that’s traditionally a one-way street. I spoke to independent games consultant and semionaut Corvus Elrod, creator of the Honeycomb engine which seeks to put story in the hands of the player, and asked him what he believed the relationship between games and story should be. His response, which I’m paraphrasing as I was totally unprepared for him to say something so brilliant, was:

"The issue is that games are trying to tell the same stories as books or movies. They’re still trying to retell Joseph Campbell’s The Hero’s Journey. But it’s in a medium where story is no longer relevant. As long as stories have been around, we’ve been adapting them to fit their selective medium. When we went from oral storytelling to the written word we had to pair it down and get rid of the repetition. When we went from the written word to movie we had to discover new ways of telling a story visually, as we could no longer rely on text to get inside a character’s head. Games are no different and we’re still trying to figure out how to tell stories in a way that is befitting of the medium."

What Corvus says rings true. It’s not that my beloved past-time of exploring an environment is inherently at odds with story. It’s just at odds with a certain type of story where the setting isn’t meant to satiate our curiosity as much. A movie, for example, is about the characters, plot, visuals, etc. The setting provides atmosphere, but we can’t engage in it. Games are different. If given the option to look around and explore, we’re going to take it. If we’re going to push the medium forward as a storytelling device, we need to look at how every action we’re doing, even the simple actions of looking around, affect the story that’s being told. Only then will we have gameplay mechanics that are not only engaging to enact, but make sense within the story’s context, rather than stand apart from it.