Bucking the recent trend towards accessibility and low difficulty, Atlus’ Demon’s Souls abandons pick-up-and-play game play in favor of a more hardcore experience. Casual gamers need not apply. With an expansive world, limitless upgrade and character customization options, and a refreshing take on the Action/RPG genre, Demon’s Souls is an engrossing experience – provided the player has patience for it.

Following character creation and a short introductory cut scene, game play begins with a brief tutorial teaching basic movement and combat controls. Finishing said tutorial involves being killed (in a single blow) by a hideous Vanguard. Upon death, the character enters the Nexus, a purgatory-like area that’s the game’s central hub. The Nexus contains five archstones – two-way transport beacons to each game environment. Initially, all but one of them are sealed; defeating the first boss in the Boletarian Palace unlocks the other four. Locations vary from the exterior of an ancient castle to a cavernous mining town and dank prison. 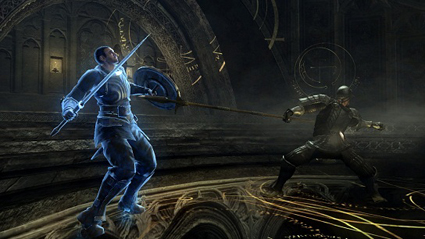 Graphically, Demon’s Souls is strongest in terms of draw distance, spell effects, and boss design. Levels are large, spell effects are colorful, and the often screen-filling bosses are impressive. The action moves at a steady clip, with no trace of slowdown even with multiple villains on screen. Unfortunately, the line between good and great visuals isn’t crossed. Several levels, particularly the Stonefang Tunnels and Tower of Latria, are darker than one would expect.

The game’s steep difficulty is apparent early on. Death is inevitable and frequent, even for the most seasoned gamers. First and foremost, there are no checkpoints. Not only will dying result in returning to the level’s beginning, but the player is further punished for their demise by a weakened state known as soul mode. In this mode, HP is reduced by a scathing 25 to 50 percent, and remains as such until the player revives – either by acquiring the stone of ephemeral eyes or vanquishing a boss. These situations do not occur often. Expect to spend the majority of the game’s 35 to 40 hours in soul mode.

While the unforgiving difficulty will discourage casual gamers, hardcore gamers will appreciate the logic and resourcefulness required to progress. Despite hack and slash game play, a kill-everything-that-moves strategy won’t work. Surprisingly, there is no enemy randomization; foes attack in the same quantity and style every time. This grants the player a slight advantage, since knowing enemy patterns will help players determine how best to approach a situation. This is one of Demon’s Souls’ strongest features: deep customization.

Defeating the first boss unlocks the ability to purchase upgrades. In a unique twist, there’s no gold to be found here. Instead, accumulated kills (souls) are the game’s currency. Souls can be used to upgrade eight character attributes. Souls can also be traded for items, weapon repairs, and spells (black magic) or miracles (white magic). Because the game can’t be too mean, souls are not retained upon death, and can only be reclaimed if the location of prior demise is found. Should the player die again before finding this location, indicated by a blue-tinged bloodstain, that soul count is gone forever.

Although useful as a source of soul retention, bloodstains serve another purpose. When connected to the PlayStation Network, it’s possible to see bloodstains left by other players. Touch them, and a brief flash of the fallen player’s final actions appears onscreen. Often, these glimpses of how others die prove invaluable, as seeing them makes it possible to avoid making the same mistakes. In general, Demon’s Souls’ online features enhance the single player experience. Instead of a separate, traditional multiplayer mode, all network functionality is built in and around the main quest. The result is seamless and compelling. Both co-op and PvP gameplay modes are unlockable. The inclusion of a messaging feature is most impressive, though. With it, players can leave a message for others to view, describing an upcoming trap, identifying a friendly NPC ahead, or cautioning about an ambush.

Contrary to most RPGs, Demon’s Souls approaches story differently. Instead of a myriad of cut scenes moving the plot forward, a brief introduction and a few video sequences set the stage. This is a refreshing change from traditional RPGs, as it places as higher emphasis on combat and game mechanics. This design choice could have been disastrous if the title’s controls were not properly implemented, but this isn’t the case. Controls are tight and customizable.

Sonically, the usual assortment of grunts, groans, and screams one would expect are present, coupled with a brilliant 71 minute orchestral soundtrack. Unfortunately, the score is under-utilized, played only during the introductory cut scene and boss battles. While it sets the mood when fighting a boss, further inclusion would have served the game well.

Bosses are both fearsome and challenging, ranging from a gelatinous blob to a screen-filling tower knight. Each of them has a different weakness, and can be fought either individually or with a friend in Co-Op.

Demon’s Souls offers noteworthy replay value. Certain portions of any given area are only accessible based on the player’s soul tendency, with grey being neutral, white being good, and black being evil. This is mostly based on the type of spells used and who the player kills. In addition, completing the game unlocks New Game+, giving those brave enough to attempt it even more challenge. 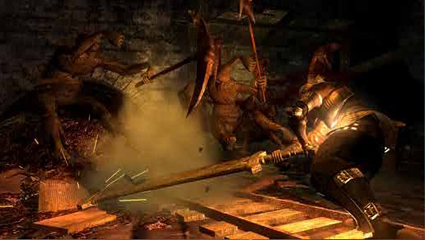 While not for everyone, Demon’s Souls is unique and rewarding. The depth is unprecedented, customization is limitless, and combat requires a surprising amount of strategy. Casual gamers or those without the patience for a deliberately difficult title will want to look elsewhere, but anyone looking for a challenge should pick this one up.