Side-scrolling shooters are one of those bread-and-butter game genres that are closely linked with early gaming experiences. The simple formula worked: one ship, a plethora of enemies, and enough explosions to make young hearts beat faster. Like any other classic, this genre never disappeared. It’s always being edited, improved, and changed to keep up with this more extreme gaming era. Chillingo offers one such game, simply tilted Underground.

Underground is an unusual example of the breed, as it attempts to bring street cred to side scrollers. All the levels take place in a subway tunnel (on the wall to be exact) and the player’s craft is a can of spray paint that transforms into a futuristic space fighter. This may be the imagination of a bored commuter, but players use this craft to shoot giant skulls, gas masks, floating grinning yellow heads, and other oddities.

The enemies look good, but as the environment is the interior of subway car, blandness is the order of the day. Splashes of color come from enemies, color-coded ammunition, and the occasional patch of destructive graffiti. Yes, the graffiti kills. The game isn’t bad graphically, just deliberately gritty. Players liking grittiness will enjoy this, but this game is a step down compared to similar titles.

The audio reinforces the gritty aspect of the graphics as the background music is a sort of a rap beat, influenced by the on-screen action as in Def Jam. When an enemy is killed, additional sounds based on the enemy killed are thrown in that change the beat. This interesting feature spices up the otherwise straightforward gameplay. Even when selecting menu options, the game plays that distinctive sound that occurs when a record is twisted across a turntable (If only there was a word for that sound *scratches head* -ED). The audio is far more enticing than the visuals, but not by much. Both halves work to combine a satisfactory whole. 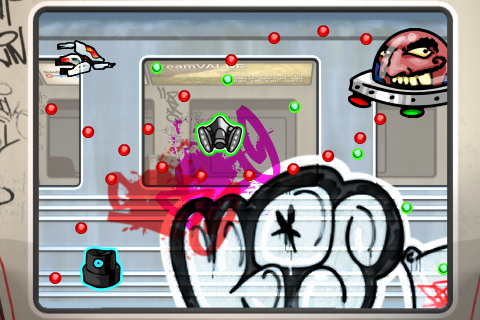 That covers the eyes and ears, but how does it feel to the touch? This requires more discussion than usual because the game does not just operate via the touch screen. Players can also play by turning the screen to direct the plucky fighter. Controls can be changed from the options for those so inclined. For me, the tilt screen was more of a handful (no pun intended) than the touch screen, but both work. One minor bug, though, was that starting a new game from the middle of a level isn’t possible. Players have to go back to the main menu and then start a new game. An odd quirk, but not game ruining.

Underground is a good (if unique) spin on the side scrolling shooter game. It won’t appeal to traditionalists due to it’s modern funkified design, but those wanting a more current take should check this out.