Gameloft is quickly becoming the face of big-budget gaming on the iPhone, with an impressive array of titles like Modern Combat and the online-enabled UNO. Sure, many of these are blatant ripoffs of popular console games, but if they’re shameless enough to make them, I’m shameless enough to buy them. Real Soccer 2010 is Gameloft’s latest attempt at delivering fantastic footie action on the go. While last year’s model was a disappointment, the 2010 edition ramps up the production values so much that I couldn’t help but be impressed. 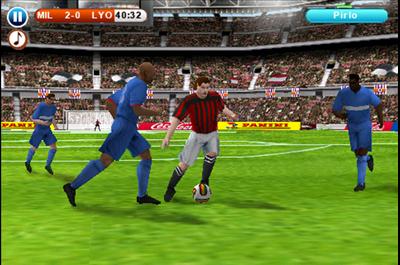 The real meat of the game is apparent as soon as you are tossed into Real Soccer’s easy-to-navigate menu, as Gameloft has tapped the EA playbook with a ton of available modes. Season Club Master essentially lets you coach a team through an entire season before (hopefully) landing in the cup and champion events, while the RS League mode pits your team against well over 100 others to compete for online leaderboard positions. There’s even a player legend mode that sticks a digitalized version of you right into the action, letting you live out your fantasy of becoming a hero of the feet.

Of course, since the iPhone has no physical buttons, the gameplay of Real Soccer is already at a disadvantage. Somewhat surprisingly, Gameloft has spent a lot of time perfecting the controls as best as they possibly could. The ever-so-common virtual d-pad moves your player, while two on-screen buttons control the action. By using simple swipe motions with either button, you can change the way you pass and shoot the ball. These allow players to perform tricky foot maneuvers while on offense, and switch to different players on defense. Slightly shaking the iPhone sends your player into a full-on sprint, while flicking the phone forward enables throw-ins. Admittedly, the controls take a little while to get used to, but they eventually feel smooth and natural. 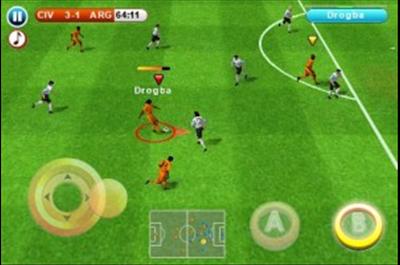 While your player is fairly easy to control, there are still a few elements that could have been improved. The auto-switching of characters can be a bit wonky, sometimes giving you control over an off-screen player. Aggravatingly, if the player that you take over is running the opposite way that you want, he needs to go through the animation of turning around before he’s able to get going. This feels cumbersome, and usually makes you mess up whatever maneuver you were going for. Thankfully, passing and shooting both work great, and all of the main soccer play mechanics that you’d find in a console title are present here in hand-held form.

Easily the most impressive aspect of Real Soccer 2010 is the sheer amount of extras that Gameloft threw in to make this feel like a true, retail game experience. There are close to 200 different available teams, with all of them having individual stats for each player. Everyone is named appropriately, and there are even alternate uniforms for all of the players. There are also ten different stadiums to choose from, and each can be played in day or night with various weather conditions. Real Soccer also allows you to change the duration of the game, AI difficulty, penalties, ball type, team formation, player and team names, letting you modify nearly everything to your heart’s content.

Once again showing no shame, Gameloft launches Real Soccer 2010 with something called Gameloft Live, an Xbox Live clone that features achievements, online play, cross-game friends, and account customization. Sadly, I was unable to find anyone to play with online, but local Wi-Fi or Bluetooth play ran silky smooth and was very rewarding. 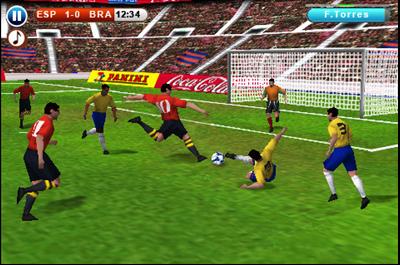 It’s always nice to see 3D visuals pulled off well on the iPhone, and Real Soccer is definitely one of the most graphically impressive games on the platform. Everything runs at a solid framerate on my 3GS, with great animations and unique stadiums that offer a simplistic, non-intrusive style. Sure, Real Soccer won’t explode your corneas, but is more than fitting for a soccer title.

Overall, Real Soccer 2010 left me with a very positive lasting impression, especially for Gameloft. It’s clear that they’ll go the extra mile to build a strong reputation on the iPhone, and Real Soccer launches them forcefully in the right direction. With a truly incredible amount of customization, overabundance of game modes, and a healthy chunk of extras (like YouTube replay uploading), every fan of footie will certainly be getting their five dollars worth here.