Over the past few years, one media darling has risen up to conquer all in entertainment: the lovable zombie. Whether in books, comics, movies, televisions, or something the kids call ‘video games’, it’s fairly obvious reanimated corpses are a hot commodity. The zombie revival has been welcome by most, but been entirely annoying to those elitists who hate things they like becoming popular.

This is ignorant of how bad things could actually be. Zombies could be angst-ridden and beautiful, sparkling inexplicably in direct sunlight to the delight of tweens everywhere. Instead, zombies feature in cool things like Left 4 Dead. No sparkling, just exploding heads – zombies 1, lame teenage wish fulfillment vampires 0.

With Left 4 Dead 2’s recent release, I decided to dedicate this column entry to the zombie game genre. Unfortunately, I soon realized there was one fact I kind of overlooked.

Well, at least the perfect first-person shooter already does. Woe, my article idea was no useless. Left 4 Dead already did zombies so well. What was it really missing? You could shoot zombies, you had to work as a team, and there was some of the best enemy AI in existence. 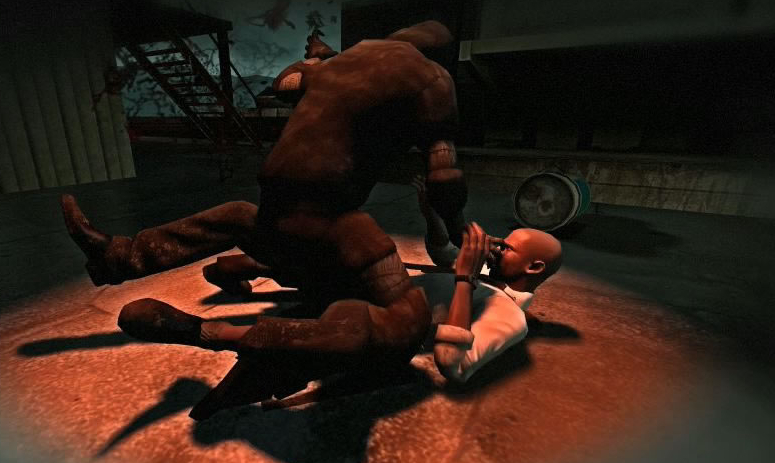 A hunter taking out Louis in the original Left 4 Dead. I mss Louis – Ed.

Still, I knew I had to think of something good. It would be difficult, but that was why I didn’t pick an easy job like being a rocket physicist or a brain surgeon. So I concentrated on trying to find some weakness in the armor of the Left 4 Dead franchise which I could improve upon. Then it hit me, I had been completely ignoring my near limitless knowledge of horror genre tropes. For you see, Left 4 Dead isn’t even actually about zombies!

Zombies aren’t fast, agile, intelligent beings that try to punch and kick you when you’re down on the ground. They’re dumb, slow, and out for human flesh. They only overwhelm when they take you by surprise or travel in enormous packs. More importantly, zombies are the living dead and can only be dispatched from this realm with a high dose of headshot. Left 4 Dead‘s antagonists are more along the lines of the infected from the 28 Days series, but with less Godspeed! You Black Emperor in the soundtrack. This makes it the perfect game about things sort of like but not really zombies.

So, the challenge becomes constructing the most enjoyable game possible relating to traditional zombies of the Romero archetype. To really do these shambling terrors justice, I would have to look to an unlikely source for a zombie game.

Living in a Zombie Apocalyptic World of Warcraft by Max Brooks
Just because Left 4 Dead was an FPS doesn’t mean the perfect zombie game has to be. Shooting intelligent, speedy infected might be exciting, but being able to walk slowly in the opposite direction to avoid slow moving zombies doesn’t strike me as being enhanced by a first-person perspective. Surviving the zombie apocalypse isn’t about running and gunning, it’s about, well, surviving. Gathering resources and survivors, building defenses, defending against unruly mobs and looters as well as the undead, these are the things that would really be the issue in a zombie infested world. 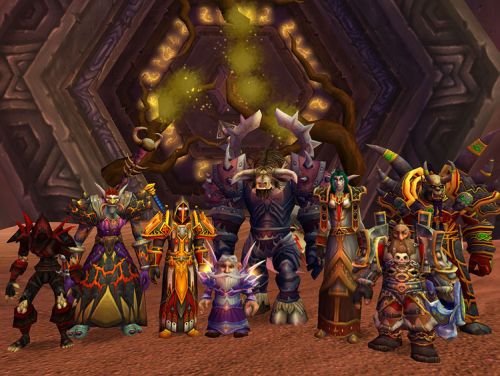 Could these be the new Survivors?

Taking some influence from two games that wouldn’t usually come to mind when thinking about a zombiepocalypse would accomplish this. The first would be World of Warcraft. The massively multiplayer online gameplay of WoW would be tantamount to creating a sufficiently ruined world. Giving characters the ability to meet up with other players, form alliances, and pool their individually gathered resources would be the most realistic way to address the zombie genre. Making houses, towns, and quests instanced would help to keep the numbers advantage firmly on the side of the walking corpses and ensure that gamers really feel like the few survivors facing the end of the world.

A big hurdle would be finding a way to use the MMO formula and still capturing the feel of a sparsely populated human society. A good way around this would be limiting players to teaming up with other characters around their level or at the same place in the plot. Letting that number grow as their levels grow would also simulate having to find other survivors and rebuild society.

For example, in your first few hours you could only form very small groups, no more than a household. All your quests and zombie killing would be instanced so that only the players in your group would be able to do those missions. Eventually you reach a certain level and have the option for your merry band to join with another merry band, suddenly creating a community. Rinse and repeat until you are rebuilding a city. Like most great zombie movies, you could use this zombie game as the framework for a strong political nation-building game, albeit one with an enormous body count.

Getting those body counts and leveling up would be best done as a shooting-oriented action role-playing game (or SOARPG for short – Ed.). Get guns, equip guns, aim at zombies as they attack you. It would seem simple at first, but as ammo runs low and the advancing zombie hoards get closer, suddenly gameplay gets a little bit reflexive. Characters of different classes would obviously have different abilities, from medics to mechanics, and forming intelligent plans while working together cohesively would be vital to survival. Especially when you found out that death is irreversible. If your medic or your main warrior gets taken out, suddenly a team is faced with changing their short term and long term goals drastically. The idea of permanent death would instill the sort of caution a group of survivors would need when facing off against millions of brain sucking automatons. It would also make things gritty and realistic. The brilliant Walking Dead comics wouldn’t be as emotionally effective if a character could just beam into a new clone body, and neither would this game.

16 bits of Brain Thirsty Carnage
With the fun hinging mostly on the having dozens of characters and thousands of zombies on the screen at one time, a developer would back themselves into a wall graphically. You certainly couldn’t have the most modern graphics if you needed to render such a large amount of characters and AI. But who says every game needs to have top-of-the-line graphics? One thing I’ve wanted since gaming advanced so quickly in the aesthetics department is for companies to go back and play with more primitive graphic schemes. Imagine how much content could be put into a 16-bit RPG right now? Chrono Trigger was about 5 megabytes, and I’ll pause while you think about how mind blowing that is in reflection. Imagine what a game at just 1GB with SNES level graphics would entail now?

That isn’t to say that everything will be super colorful and have Mode 7. Technology is pretty far along now, and the dance between high graphics and online functionality is much easier to perform. Even if, to get the thousands of living dead necessary, you had to cap the graphics at The Sims 2 that wouldn’t be a negative. Especially considering how integral mechanics from that series would be to this game. 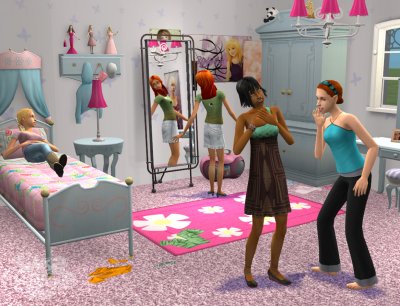 The calm before the apocalypse.

I mentioned earlier that two games would serve as the parents of this zombie baby. If World of Warcraft would be the Mekhi Phifer, than The Sims would be the Inna Korobkina. One of the largest parts of the game, survival, would be helped along by having your character and eventually larger groups using collected materials to build structures for habitat and defense. In The Sims you could take a completely undeveloped plot of land and build whatever you wanted. This would be the same thing, except with scavenged parts and materials instead of wallpaper and floor tiles. Giving the players options to form friendships, rivalries, and romances with other players could also be handled with the complexity of The Sims. The more options for building defenses and building relationships, the more this would make each group unique, giving players tons of replay value as they level up or if they have to start over because of a sudden case of the zombies.

I’m particularly sure that a game like this would have a huge following. The fantasy developer that created this game would probably be able to outfit their zombie shelter in solid gold. If a night of drinking in Old City dive bars with my friends is indicative of the detail and import the average gamer has for their zombie plan, then giving us the opportunity to simulate these plans, to prove who the ultimate zombie strategist in the group is, would be priceless. Not to mention a perfect way to decide who gets to be leader. So far we have just been going off of the scientific dibs system.