There had to have been a lion’s den of obstacles to overcome during the development of Assassin’s Creed 2. Like Paris Hilton, the original was an exasperating display of style over substance; a beautiful looking game that was depressingly dull on the inside. It’s apparent to me that the developers learned their lessons, however, as Assassin’s Creed 2 is easily the most improved sequel that I’ve ever played.

Ubisoft Montreal was clearly dedicated to packing in as many interesting gameplay mechanics and exhilarating moments as they could, all of which are perfectly interwoven with a story that teeters between the sublime and ridiculous. Returning hero Desmond has escaped the Templar Knight facility that held him during the first game, and is soon escorted to a secret Assassin base by an old friend. Once in a new and improved Animus, Desmond recalls his memories of 15th century Florence as he takes the mantle of his ancestor, Ezio Auditore. Over time, Ezio’s skills begin to grow as he gets deeper embroiled in the long-standing feud between the Assassins and the Templars, both of which are searching for an ancient power. 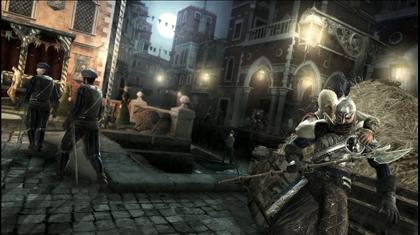 Like Altair before him, Ezio dances over Italian rooftops and villas with skill that even the greatest free-runners would dream of possessing. The cities are packed with interesting diversions, including collectables, races, and a nearly infinite supply of unique side quests. Completing these tasks fills your wallet with enough Florins to buy new weapons, items, and even guilds to call your own. The cities also contain a series of hidden Codex pages written by Altair, each of which include some stunning revelations about your family and history. These Codex pages can be taken to painter/inventor/genius Leonardo da Vinci, who interprets their secrets to upgrade Ezio’s weaponry. These interactions with real historical figures show the developer’s deftness in weaving their fictional narrative with elements from actual history, and it’s done well enough to never be distracting.

Assassin’s Creed 2’s visuals absolutely shine, as each expansive environment is busily jammed with life. There’s an astounding number of unique character models in the game, making each town feel alive and bustling with citizens carrying out their daily activities. When climbing to the top of the carefully crafted and intricately detailed architecture, you’ll find yourself gawking at the expansive vistas that stretch out for miles in front of you. The music and voice acting are both varied and enchanting, fitting the Italian aesthetic perfectly. Since many citizens speak their native language, I would recommend turning on the English subtitles right away so you can catch all of the little nuances and background details that would be missed otherwise.

Unfortunately, not everything in Assassin’s Creed 2 is as masterfully assembled as its presentation. The combat is shallow, as button-mashing and a few simplistic combos will get you through almost anything. The marionette control scheme isn’t that intuitive, sometimes requiring awkward finger placement to select the right weapon. The camera can occasionally be a source of confusion, as it requires some finegaling when fighting multiple opponents in tight spaces. Thankfully, none of these problems are detrimental enough to pull the player out of the experience. 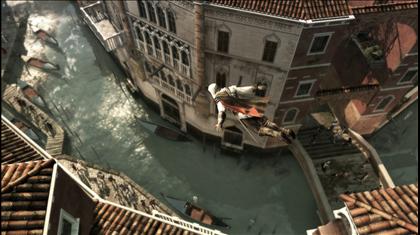 Ubisoft Montreal has been brave with Assassin’s Creed 2, creating a stunning sandbox adventure filled with a compelling story and a plethora of exciting experiences. While playing, I felt like this is what the developer truly intended the original game to be, as the series is finally living up to its magnificent potential. Assassin’s Creed 2 is easily the most exciting open-world adventure of the year, and is an essential purchase that won’t soon be forgotten.