Being the bad guy who makes the protagonist’s life hell is one thing. Posing as the good guy’s friend while watching and waiting for the perfect opportunity to screw them over reaches a level of bastardly reserved for one of the greatest traitors of all time: Judas Iscariot. These ten vile, underhanded bad guys of gaming may not have committed as grievous a sin as betraying Jesus Christ for thirty silver pieces, but their betrayal is as despicable as it is unforgiveable.

NB: spoilers afoot, so if you don’t want to see the result look away now.

After realizing that being a member of the legendary Star Fox team wasn’t a lucrative enough profession, Pigma sells out to Andross and betrays his comrades, leading to James McCloud’s death. Unsatisfied with murdering one of his friends, Pigma joins up with Star Wolf to hunt down another former team member, Peppy Hare. However, his plans don’t come to fruition and, following a number of embarrassing defeats to Star Fox, Star Wolf kicks Pigma out of the team for being a greedy punk. Later, Pigma inadvertently fuses his spirit with a spaceship, the most logical step in the evolution of a backstabbing asshole.

At first, Sirius seems to be a pretty alright guy. In exchange for helping him get revenge on Altair for murdering his family, Sirius helps Bomberman out in some tight spots and teaches him the ropes. But after beating Altair, Sirius reveals that he was just messing. The truth: he was just using Bomberman to kill Altair so he could steal the Omni Cube. Oh, and he also wants to destroy the entire world. His villainous intentions are fairly cliché, but his duplicity is subtle, especially considering how the game actually forces gamers to discover it by finding almost a billion tokens that are all impossible to obtain.

If a Star Wars game has two cloaked, shadowy Sith Lords in it, then it’s almost guaranteed that one will try to viciously murder the other before the end. Whether it’s Darth Malak opening fire on Darth Revan or Darth Vader using Starkiller to usurp the Emperor, dark Jedi inherently have the irresistible urge to betray everyone and anyone around them. Though the Sith’s portrayal changes from game to game, one consistency remains: turn your back on a Sith and you’ll probably find a crimson lightsaber protruding from your spine.

Albert Wesker wasn’t always a conniving douche. In fact, he used to be the commanding officer of S.T.A.R.S. That is, until he lured his team in a zombie infested mansion where most of them were eaten alive. After that, Wesker betrays the Umbrella Corporation and a number of easily dispensable henchmen like Resident Evil 5’s luckless Excella, all before plotting the destruction of humanity with the mutated Uroboro virus. Moral of the lesson? Never trust a man who still takes fashion tips from The Matrix; it rarely leads to good things. 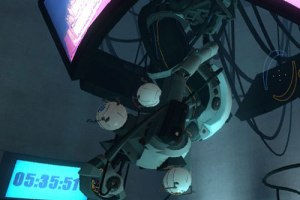 If movies like iRobot, Terminator or 2001: A Space Odyssey have taught us anything it’s that sentient robots simply cannot be trusted – ever. No matter how useful they may be, sooner or later they will always turn on their creators. Maybe they’ll flood the building with a deadly neurotoxin and murder everyone like in Portal. Maybe they’ll deceive you into committing their evil bidding before trying to kill you off like in System Shock. Computers may appear friendly but rest assured, their intentions are almost always hostile. They’ll let you think everything is safe and secure because of their installed morality chips or whatever, but the moment you let your guard down…

Lance Vance is a drug dealing criminal, just like everyone else in Grand Theft Auto. However, while most of the good guys have some kind of code of honor that prevents them from routinely double crossing their friends, no such compulsions keep Lance from turning on Tommy Vercetti at the end of Grand Theft Auto: Vice City. Despite being one of Tommy’s closest allies (as well as an accessory to countless murders), Lance grows frustrated as Tommy’s empire grows and eventually teams up with rival gangster Sonny Forelli in an attempt to take Tommy down. Things don’t end very well for Lance, though. One explosive gunfight later and he ends up just like every other two-timing scumbag in Grand Theft Auto: dead.

Since he was first introduced in Metal Gear Solid, Revolver Ocelot has persistently been screwing over anyone who made the tragic mistake of trusting him. He’s been a double agent, a triple agent, and even a quadruple agent, switching allegiances like most people switch outfits. It’s almost impossible to tell where his loyalties lie at any given time because they’re bound to change with the next inevitable plot twist. He’s betrayed governments and terrorists alike, yet for some unexplainable reason there never seems to be a shortage of clueless morons falling over themselves to fund the double-crosser.

In the few free moments where you’re not hacking gun turrets, murdering little children or bashing in skulls using a wrench, you get well acquainted with the disembodied voice of an Irishman named Atlas. Or so you think. You’re led to believe he’s your friend and ally, and it even appears as though his family is blown up by a common enemy in Andrew Ryan. Naturally, everything you think you know turns out to be a lie. Atlas is really a gangster named Frank Fontaine who’s been manipulating you this entire time to do all his dirty work. However, karma ultimately bites Frank in the ass when he’s brutally stabbed to death by a legion of Little Sisters armed with giant syringes.

Even in a game where betrayal is practically the norm, Delita still manages to stand out as a duplicitous, manipulative traitor. Once a trusted friend of the respected Beoulve family, Delita goes a little nuts when a fight between nobles and peasants goes horribly awry and his sister ends up killed. Determined to create a new and better Ivalice, Delita proceeds to lie to, double-cross and murder anyone and everyone until he eventually crowns himself king. He assassinates his ally Goltana, persuades his best friend Ramza to go on a suicide mission on his behalf, and eventually even slays his own wife. While one of the most brilliant, cunning characters in Final Fantasy history, Delita is also one of the most deceitful and evil.

Whenever you play a multiplayer game, rest assured there will always be someone out there who’s a self-centered bastard who will regularly try to betray you. They’ll steal your kills, gank your med packs, ninja your loot, hoard the ammunition, and just plain shoot you when you’re not looking, all for fun. Your fellow gamer is one of the most despicable traitors on the planet, but the unfortunate thing is he or she is probably the person sitting right next to you on the couch.