Recent weeks have seen a constant barrage of ’Best of Decade’ lists from all corners of the media. From best albums to worst internet memes – Star Wars Kid, anyone? – no stone has been left uncovered in the communal look back at the Noughties. Life has indeed changed considerably since 2000, an era where the iPod was a twinkle in Apple’s eye and LCD televisions were for the super-rich only. Gaming and more importantly how we game have also evolved with technology’s march forward. The past decade has seen high definition and online gaming become the norm while the games themselves have went from costing a few million dollars to hundreds of millions.

The gaming landscape today was almost unimaginable ten years ago. But, rather than add to the growing number of retrospective lists, I find my mind wandering to where gaming will find itself ten years into the future. With the speed of modern technology as it is, what changes can we expect in the next decade? Let us delve into the imaginarium, and consider what gaming will look like in 2020…

Augmented Reality (AR) is a term used to describe a physical real-world environment that is enhanced by the addition of virtual imagery to create the appearance of a merged reality. Bu mixing the real and virtual world, something entirely new and different is created. Examples are already reaching households: Avatar and Coca-Cola have printed a code on the side of cans which, when viewed through a webcam, gives the appearance of a spacecraft orbiting your drink. iPhone developers are also beginning to make use of AR with applications which superimpose text over landmarks on tourist trails.

We are starting to see examples of AR in gaming also. Early showings of Gem, the PlayStation variant of Project Natal, featured controllers with brightly colored objects on them, such as pink spheres. Cameras mounted on the TV follow the sphere’s movement and replicate players’ movement with onscreen avatars. Gem is expected to be released before 2011 and both it and Natal are rumored to be very affordable at well under $100.

A more tentative example is the ARQuake project, which features body-mounted computers running a highly modified version of Quake. Developed by the University of South Australia, it uses a series of GPS units, inertial sensors and glasses capable of overlaying computer information. In combination, these enable users to run around the real world while playing id’s classic first-person shooter in a computer-generated world. However, it runs in at over $10,000 so this is a very fun but experimental toy for now. We are a long way from seeing this kind of tech in reality but, by 2020, advancements on our next topic will likely make AR a part of everyday life…

As computers get ever more powerful, they also get more compact and portable. The natural progression of this miniaturization is the integration of technology directly into the clothes we wear. Carbon polymers currently in development are as comfortable against the skin as the synthetic materials we are used to, but have the added bonus of being able to carry an electrical charge, vital for splicing computers into them. In combination with lighter, more efficient batteries combined with the likes of solar power, projectors, and glasses which can display computer data, what we know now as computers will be so tiny and light that they can be integrated into items of clothing. In the future, expect to see what we currently know as PCs threaded into your sweaters and jeans, and phones which project onto your hand directly.

In simple terms, you will never be away from a computer, and as such gaming is always going to be at hand. Imagine having a PS3 (surely a PS4? – Ed) integrated into a jacket sleeve or being able to organize a game of Call of Duty down the pub by putting on the right t-shirt and glasses. The question then becomes: how do we access on the go the massive catalogue of games that exists?

The answer lies within the Cloud. Cloud computing utilizes the Internet and massively powerful, centrally-housed servers which we access to perform tasks. Because all the computing is done in a hub, the information can be accessed in any location using equipment with minimal processing power. Practical examples of this currently exist with things like Google Docs allowing us to store documentation, spreadsheets and email remotely. 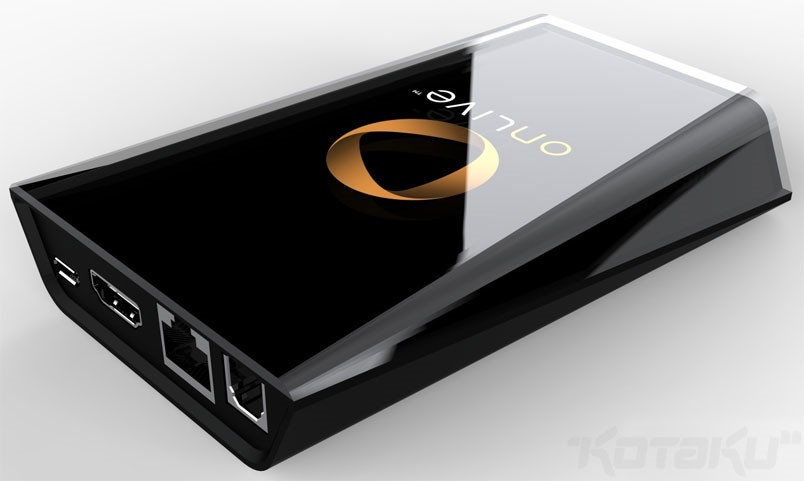 Is the face of gaming’s future, or will Nintendo, Microsoft and Sony have a say?

One of 2009’s biggest announcements in gaming plans to fully exploit cloud computing. First touted at GDC, OnLive is a gaming-on-demand platform where the game is synchronized, rendered and stored on a remote server and delivered online. Any device capable of playing video over the Internet can be used to play any game OnLive offers, as all the processing is done on their servers. Netbooks and iPhones have been demonstrated using the technology and when launched, a set-top box will be available allowing access to the platform on any TV.

The skepticism surrounding OnLive is widespread and vociferous. To display 720p at 60fps as it promises, each user will require the processing power of a high end dual core PC running the equivalent of a 9800GT. Multiply the number of connections by the thousands of players using OnLive at once and something has to give and that something is most likely to be the frame rate. Another worry is broadband capability in the West. For OnLive to work effectively there needs to be zero lag between the video being streamed and commands being sent from joypads to servers. Although the company has stated that current broadband speeds can utilize the system properly, it is widely believed that the infrastructure doesn’t exist to make OnLive viable.

However, in ten years time, speeds will be more than sufficient for us to access OnLive and the cost of processing power should have dropped sufficiently so that the system should be easy to realize theoretically. They do have one other rather large obstacle to face, however: the game companies themselves. By moving gaming to the cloud, OnLive plan on circumventing the need for a games console and, by proxy, the need for Sony, Microsoft and Nintendo to be active in the market. They will oppose this tooth and nail to try and maintain a physical presence underneath our TVs. Nonetheless, I suspect that a cloud-based system is inevitable and will see light of day before 2020. Whether that system is OnLive remains to be seen.

Increased broadband speeds will also affect how we pay for games in 2020. Gaming will follow a trajectory similar to the one music’s followed over the past decade. Since the introduction of iTunes in 2001, then the music store in 2003, music sales have rapidly switched from the physical domain to the digital. Just when it looked like Apple’s model was singularly dominant, a new system has become popular. Rather than owning music, simply being able to access it for a set monthly fee is becoming commonplace. Spotify is such an example, one which has only become possible with increasing broadband speeds.

Now imagine a subscription to play whatever games you like, wherever you like, whenever you like. Rather than owning games, you pay for the privilege to access the latest titles on a device in any location. Steam has led the way in offering an online platform to games from different publishers. By utilizing the cloud, players can save games, profiles and settings on Steam servers then access them on any PC capable of running that game. Silicon Knights boss Denis Dyack sees the worth in Steam and gaming becoming cloud-based:

“In some ways it’s the absolute elimination of any hardware as far as the consumer is concerned, because the hardware is the cloud. It helps on so many levels because it resolves the piracy issue, which is a massive problem today, and the used games issue, because you buy something and it’s yours forever – it resides on the cloud. These are wins for the consumers and wins for the game developers… People confuse a one console future as a monopoly and that’s completely wrong. The idea is it would be an open standardized format where anyone could manufacture. If a grandmother goes into a store and wants a specific game for her grandson, she has to figure out the console, the ratings system, and all these barriers that have been artificially created… People think that’s normal because that’s all we’ve ever had. This is a win for everyone.”

But we aren’t necessarily going to have a joypad to hand when we play these games. Nintendo has proven that motion control isn’t just a gimmick. Sony and Microsoft have quickly followed suit with systems that offer even more than the Wii’s MotionPlus. Microsoft promised that Natal will be able to ’read’ how we are feeling and react accordingly while Sony’s ‘Magic Wand’ will use a combination of LEDs, cameras and inertial sensors to obtain a degree of accuracy far surpassing anything achieved by Nintendo so far. Not to be outdone, Nintendo recently hinted that the next DS will have some form of motion control. However, for the moment, the technology is still being refined and is far from precise. 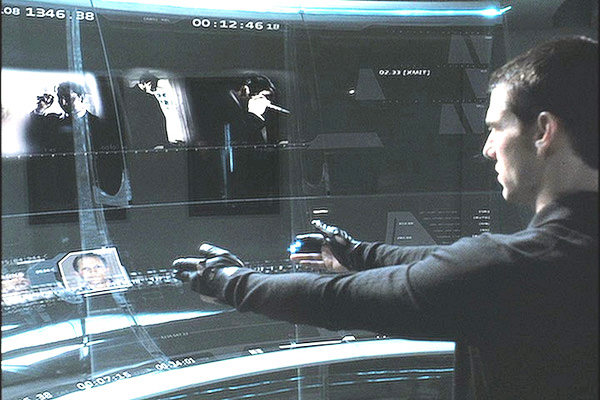 It’s stylish and sleek, but will it become a reality?

In the future, expect Minority Report-style control of computers and games with subtle movements of the whole body including fingers, hands and even eyes. But unlike other advances, I don’t expect motion control to fully replace the joypad. I suspect that when sat on the couch at home, people will still appreciate the immediacy that only something physical in your hand can provide. But as gaming becomes more mainstream and new players look for new ways to interact with the games themselves, motion control will be a significant and important part of gaming throughout the next decade.

This may be a bit of a reach for 2020, but I do expect the current rise in popularity of motion-controlled gaming to be mirrored by games controlled directly by our mind. Sensors placed on the head have the capability to read brainwaves that can then be interpreted into commands a computer can understand. This is of course a technology in its infancy, but there are toys currently available that allow children to control movement just through thinking about them, and these toys are but an incredibly simplistic aspect of a technology moving at breakneck speed. Scientists have already developed prosthetic limbs that can be controlled through the nerve endings contained within what is left of an amputee’s limb. While still in the early stages, this technology has far reaching potential for many industries including gaming. If nothing else, after a frustrating level of New New New Super Mario Bros, you won’t need to worry about replacing a smashed joypad!

No one can predict the future but, if you look closely, the signposts are there to be interpreted. As gaming becomes increasingly popular, as those involved get older and as technology marches on, the way we play will change dynamically. We cannot predict whether or not these changes will be positive but, if the last ten years are anything to go by, the next decade of video gaming is going to be very exciting indeed.