After months of scratching and saving, you were finally able to spring for a shiny new Xbox 360. Hell, you even traded in your old Xbox and all your last-gen games just to grab a couple new titles. One problem, that was months ago, and you have been stuck paying off your massive credit card bill instead of buying new games. Fortunately, a side-effect from the release of next generation consoles is that last-gen title prices have fallen through the basement. Going through a gaming drought?  Well, dig in those couch cushions because here are 5 tried-and-tested Xbox games you might have missed that cost under $50 total! 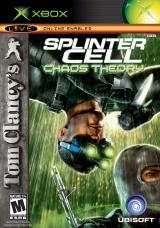 Splinter Cell Chaos Theory was undoubtedly the jewel on Tom Clancy’s video game crown at its release. Every aspect of gameplay was sharpened and polished. The title featured tight controls, amazing level design, and gorgeous graphics. The Splinter Cell series already boasted some of the best textures and animations brought to the Xbox, and Chaos Theory did nothing but improve on the tradition in every aspect of the game. The title is definitely one of the best looking games released for the Xbox. Chaos Theory also incorporated refined co-op play with four new levels specifically designed for the co-op experience both on and offline. The title also equipped the stealthy and deadly Sam Fisher with a knife, new moves, and different attachments for his SC-20K including a sniper and shotgun. For the less confrontational (AKA wussies), Chaos Theory let gamers disable lights to sneak around enemies instead of assassinating them. All in all, Tom Clancy’s Splinter Cell Chaos Theory still delivers a suspenseful and engaging experience well worth the 8 bones it currently will set you back.

2. Prince of Persia: Sands of Time

All gamers can remember the first time they played the 2D version of Prince of Persia. It was ridiculously difficult and suffered from clunky, unresponsive controls, but none of that mattered because it looked awesome. After playing through Prince of Persia: Sands of Time, you may find yourself dropping 800 Microsoft points to play its revamped granddaddy on Xbox Live Arcade (yes, it’s still insanely difficult). Perhaps the most groundbreaking aspect of this title was that it blended three gaming genres (platforming, action, adventure). Sands of Time also allowed players to control, you guessed it, time. Well, to a certain extent. If gamers made an errant jump, they could rewind their hop into oblivion and try again. Where was this feature on level 8-4 of Super Mario Bros. when I was six years old??? In 2003, Sands of Time was an example of the cutting-edge in gaming from game mechanics to art design, and it holds up extremely well to the test of time. Just in case you missed it; you can buy Sands of Time for 2 bucks less then you can for the XBLA original. Take that and shove it on your 2D spikes Live Arcade!

Warning to gamers: Don’t get Sands of Time confused with Warrior Within. Nothing says ancient Persia like rap-metal (way to screw the pooch Ubisoft).

Born out of the hilariously bizarre mind of Tim Schafer, the premise behind Psychonauts is one of the most original in gaming history. Players platform their way through other character’s minds in this endearing title. Levels are designed to emulate each character’s personality, and players can expect insane images and environments around every turn (think giant floating slabs of beef). The cutscenes are filled with witty banter that is sure to make even the most callous gamer crack a smile. Although this game garnered much critical praise, it didn’t translate to Psychonauts making its way into many gamer’s homes. Perhaps the strange psychic premise of the title was a little too obscure when it was first released. Psychonauts provides a much needed diversion from the run-of-the-mill concepts behind most games. This is one platfomer that never gets stale and is quirky and fun from start to finish. Fortunately, none of the levels mirror the savagely AO content in most of our minds.

Although the rabid fans of Star Wars: Knights of the Old Republic were baffled (and a little pissed) by BioWare’s decision to forego work on KOTOR II and release an original title instead, they were treated with perhaps the most amazing RPG to be released on the Xbox. The story, which is grounded in Chinese mythology, immersed gamers in a gorgeous world with a unique story. If you loved KOTOR for more than just the lightsabers, you might love Jade Empire even more. Hell, even if you hate RPGs, this title is worth picking up from the bargain bin. Everything that made KOTOR great was improved in Jade Empire. The title boasted an expanded morality system with different philosophical paths the gamer could pursue. What further elevated Jade Empire above KOTOR was its real-time action-oriented system that was immensely deep but immediately engaging. Jade Empire managed to accomplish all of this without making the characters look creepily pre-pubescent and deeply androgynous (we’re looking at you Final Fantasy). Jade Empire has everything even the most hardcore RPG fan’s geeky little heart could desire. Deeply engaging storyline? Check. Beautifully rendered world? Check. Excellent combat system? Check and mate.

If you have ever played this game, you must have felt that you landed in some sort of bizarro universe where up is down, left is right, and movie games are actually better then their Hollywood counterparts. While the movie was mediocre to horrible, Butcher Bay, which was released exclusively on the Xbox, was great to incredible. The title managed to set itself apart from the genre that was mired with average FPS games (thanks for inspiring that Halo). Butcher Bay was able to incorporate FPS shooting, RPG elements, and an engaging storyline with tremendous success. Riddick’s unique eyeshine ability provided an added element that further increased the depth of gameplay in this post-apocalyptic shooter. If the fact that Butcher Bay dramatically outshines its movie partner wasn’t strange enough, Vin Diesel’s voice work on the title was top-notch (turns out having to move and talk is Diesel’s downfall). If you are craving  some FPS action but only have enough cash in your pocket for a value meal (not even super-sized), the Chronicles of Riddick: Escape from Butcher Bay is just your game to get a cheap fix.

The grand total for all five of these games is a whopping $46.95! Not bad for well over 50 hours of gameplay on some of the best games the Xbox had to offer. Being a gamer isn’t just about preordering new titles and standing in lines waiting for the launch of new consoles. It is about recognizing quality games even though they might be a few years old. Now is the perfect time to fully stock your gaming library for mere pennies compared to their cost a few years ago. Whether you love platforming, action, first-person shooters, or RPGs, these are just a few of the great games for that dusty old Xbox that you might have missed.

*All prices quoted from www.gamestop.com