In video game culture, it’s hard to avoid running into fanatics from time to time. Once a rare breed relegated to dingy arcades and Star Trek conventions, the modern video game fanboy population has thrived in the current climate of mainstream electronic entertainment. Whether trolling on community forums, doling out unsolicited advice at video game shops, or chastising others online for their substandard video game skills, these power-nerds seem to have a harder time remaining objective about their favorite gaming system or franchise than they do securing a date for the prom. But what really makes the console fanboy tick? Join us as My Arcade Planet drops the knowledge bomb… psychology style! (And for those of you who want to get your learn on, feel free to click on the hyper-text links and pictures scattered throughout the article.)

“If my console is so awesome, I must be pretty awesome too!”
Despite the research community’s best efforts to prove that playing video games turns well adjusted children into Columbine-style killers, there is actually some compelling evidence that games can actually increase feelings of competency and self worth. As such, the hobby attracts a lot of people who may not feel very good about themselves in the real world and come to rely on the sense of empowerment provided by video games as their primary source of self esteem. You know the type: they may not know where the clitoris is, but they can draw you a topographical map of Azeroth from memory lickety-split.
However l33t skills and nerd-lore aren’t the only way gamers use geekery to improve their self esteem. Sigmund and Anna Freud believed that one of the ways people who feel down in the dumps can defend their fragile egos is by personally identifying themselves with an object or person which they respect. In short, defensive individuals can borrow the strengths of an admired object (i.e. a next-gen console.) This defense mechanism, called introjection, is also widespread in other facets of popular culture as well; fans of professional sports, musical groups, and just about any other area of interest can all succumb to hero/object worship as a means of bolstering their low self esteem. How many times have you heard a sports fan exclaim, “Yes! We won!” Did we now? I can see that the team won, but meanwhile you’re 29 and live in your parent’s basement.
In the video game realm, we call such defensive individuals fanboys. Since the fanboy identifies themselves with their console on such a deep personal level, they view any criticisms of said console as personal insults which will be defended with the same ferocity one would expect from a ‘yo’ momma’ remark. The other side of that coin is that when a good game or favorable bit of news comes out for their console of choice, the fanboy views it as a personal victory. It’s a vicious cycle of self hatred and elation, and all of it is based on external factors that actually have nothing do with that individual. So the next time you see an angry fanboy polluting the boards with bile and venom, send some friendly emotocons their way. They certainly need them. 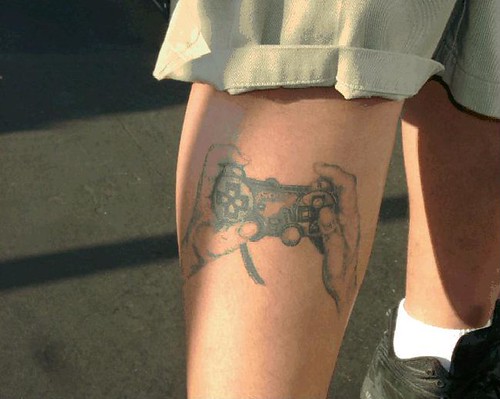 The Psychology of Brand Loyalty
Marketing research suggests that one of the crucial components of brand loyalty is tapping into the consumer’s nostalgia. For example, when your dad picked up that 27” Sony Television in 1987 during a clearance sale he was inadvertently sewing the seeds of consumer allegiance for the Sony line of products, encompassing everything from Walk-Mans to PS3s. Simply being around a particular brand or item, especially for years at a time, can instill a sense of consumer confidence that lasts a lifetime. Are you one of the suckers who bought a 3DO? It could have been a subconscious reaction to that Panasonic microwave residing in your kitchen.
Furthermore, a psychological phenomenon known as the mere ownership effect describes how the consumer will exaggerate the positive qualities of products that they own while simultaneously diminishing the positive qualities of similar products that they do not possess. In a nutshell, people like to think of themselves as clever consumers, and will distort the facts if necessary in order to reach that conclusion. In the video game world, this type of behavior manifests itself in terms of fanboys relentlessly dissing the competition. In a desperate attempt to convince themselves that they made a wise purchase, the fanboy will misrepresent concrete facts like hardware specs or sales figures in order to justify their spending habits. And even though many of us may feel above all of this manipulation, the truly scary thing about the psychology of consumption is that factors like the mere ownership effect and the nostalgia principle occur within all of us to some degree whether we are aware of it or not.

“You Can’t Always Get What You (Pretend Not To) Want”
Gaming is certainly an expensive hobby. In addition to dropping several Benjamins on the initial hardware, gamers pony up another mountain of dough to buy games, peripherals, services subscriptions, and numerous other associated expenses. What this means is that Joe Blow can’t afford to buy each and every console that comes down the pipes. As a result, many video game consumers are faced with a choice between fairly similar products.
Psychologist Kurt Lewin theorized that when people are faced with a choice between two equally positive items, (for example, the choice between a PS3 and a 360) they experience stress. Lewin went on to posit that after making their decision people alleviate this stress by immediately viewing their choice as being vastly superior. So all of the sudden, the two previously similar things now appear very different in the consumer’s mind. This suggests that when a gamer is in the store trying to figure out which console is for him, he is secretly afraid of making the wrong choice. So much so that once the decision is made and the credit card has been scanned, his mind goes into overdrive as he rapidly accentuates that console’s positives while mentally eliminating the negatives. In a matter of seconds, the other console under consideration just moments ago becomes, ‘a piece of crap that only a loser would buy.’ In this sense, fanboys can be created the minute they pay for their console, (so long as it’s the only one they have.) So the next time you’re at GameStop and somebody is excitedly buying their first piece of next-gen hardware, realize that you could be witnessing a very special moment… the birth of a fanboy.

If this analysis has shown us one thing, it’s that fanboys are sad creatures. Whether over-compensating for their perceived shortcomings or lying to themselves to avoid feeling duped, the life of a fanboy is fear-based and insulated from reality. However there is always hope: humans are remarkably adaptive creatures, and within every fanboy is a reasonable individual waiting to spring forth. So instead of reacting in a judgmental fashion the next time you come across ‘fanboy vulgaris’ in your travels, try not to be too hard on them. Like pouring gasoline on a flame, you’re hostility will only make matters worse. Instead, try reminding them that we are, after all, united under the common banner of gaming, and as Tyler Durden might say, “You are not your console.”

Special thanks to Jeremy and Rebecca for research assistance and for showing me how to use all the weapons in Worms.