Started as a sequel to the PS1’s original, Warhawk on the PS3 went gold as an ambitious online-only title. Combining fast, simple combat with a complex network setup, the developers at Sony’s Santa Monica studio dropped the solo campaign in order to concentrate on multiplayer, drawing criticism from around the industry.

The result, offered for download on the PSN and in a Blu-ray version bundled with a Bluetooth headset, is a polished title with plenty to offer all varieties of gamers. For casual gamers, Warhawk offers the ability to host your own game or play on someone else’s; for your average gamer, the easy-to-grasp control scheme and game types will get them playing and enjoying themselves soon after picking up the controls. For hardcore types, a great ranking system paired with basic clan support (and I emphasize ‘basic,’ as a slew of improvement is needed before real clan support is realized) and worldwide leader boards adds room for intense competition and enormous replay value.

When either looking for hosted games or setting up your own, you’re given a choice between four game modes: deathmatch, team deathmatch, capture the flag, and zones. The first three are typical shooter fare: deathmatches make every man for himself, team deathmatch pits two teams in a race to gather points, and capture the flag requires one team to grab the other’s flag while protecting their own. Zones, a third team game, is another race to gather points: to gather points, a team much capture a region (done by standing next to the region’s central node to take it from the opposing team or increase its size), and the more area a team controls, the faster their point total increases. There’s a great variety of play found in each map/game combination, so it’s rare to find yourself bored. 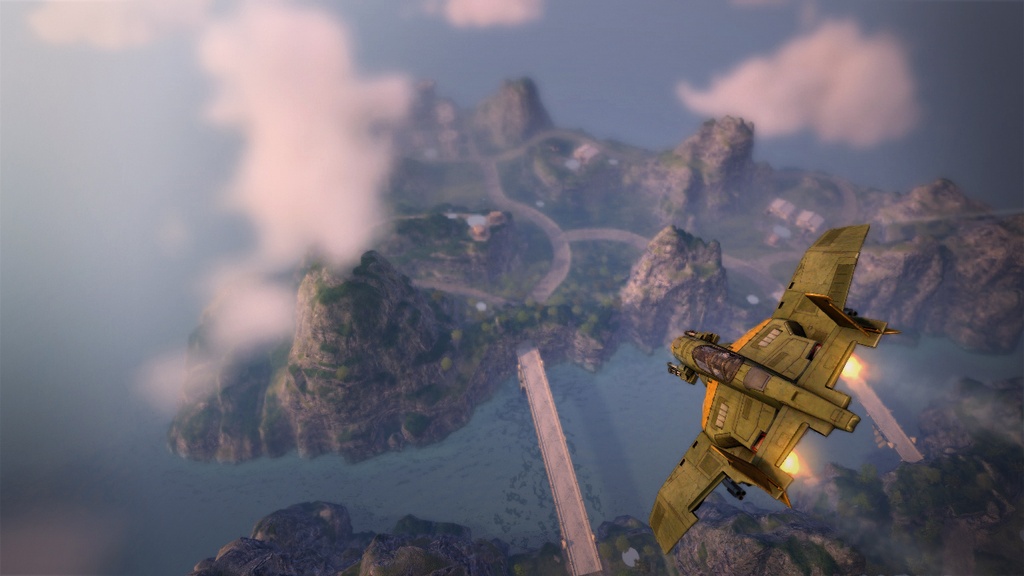 Staying mobile is important in all team matches, and a variety of vehicles are at a player’s disposal. On the ground, the 4×4 is lightly armored and armed with a mounted gun turret, but travels very quickly from point to point, making it key to most successful flag captures; the 4×4 seats three, including the driver, passenger, and gunner. The tank moves slowly, but can give/take a beating to anything, and with a second player riding shotgun in the hatch, it can quickly become a mobile harbinger of death and node capturing. Euchadian Warhawks and Chernovan Nemesis craft are fast and agile, but have less armor than even the 4×4. Though armed to the teeth with a variety of spawnable weapons, the air craft in Warhawk are far from invincible when paired against turret systems, troops carrying rocket launchers, or tank sharpshooters. Because of the vehicles found in each map, the game plays at several levels, whether it is troop v. tank or tank v. Warhawk, and each plays very differently.

Players are awarded in ranked matches with medals, badges, and ribbons for their conquests. Ribbons are small rewards given at the end of a match for conduct, awarding the player bonus points for kill streaks, accuracy, match ranking, and nearly two dozen other achievements. Badges are awarded for skill in specific combat areas and weapons; each badge has three levels of completion, the final requiring long commitments of time. Medals are the most difficult awards to get, most with several requisites that take many months to complete (or, in the case of the “Supreme Sacrifice” medal, a lot of deaths).

Not only do players gather awards, they can rise through a series of twenty ranks. To be promoted, a player must accrue a number of points and have at least one instance of an award; lower ranks have easy-to-reach requirements, but the difficulty in ranking climbs steeply. While many play to the least common denominator and offer end rewards for anyone who simply spends a long period of time playing, Warhawks ranking system makes it such that ranking is something that is earned from experience and skill.

These stat-tracking features are great for players who love to spend hours a day improving their profile, but Warhawk also offers options for its more casual players. Stats are only tracked during ranked matches, but Dylan Jobe spent many weeks prior to the game’s release speaking about the network features (as well as the wonderful split-screen capabilities) offered by the game: any PS3 can be turned into a game server. Many options are given to those wishing to host a game, including the server’s display name, map rotations, team balance options, and the availability of split screen play. It is also possible to host private games, protected by password, or let your PS3 be used as a ranked dedicated server, or play an offline match with three friends on one system or over a LAN with more than one.

In-game, it’s easy to notice Warhawk’s distinctive graphical style. The scenery is gorgeous and detailed, mixing man-made structures with dynamic terrain, and vehicle models all seem readily familiar with inspirations drawn from World War II. Opposing teams are split into the game’s two factions: the Euchadians and the Chernovans. Both sides have their own unique architecture, vehicle design, and character models, and as you rise through the game’s ranks, customizability options are opened up for your character and Warhawks/Nemesis while playing on either side.

The visuals are unilaterally sharp and detailed, presented in native 720p that upscales to 1080i. The draw distances span most, if not all, of every map available, and never once was there a drop in framerate while playing even 32-player matches. Character, vehicle, and turret animations are smooth and responsive, though they skate on the edge of cartoony in many cases, and character death sequences combine dramatic explosions with a fixed-camera view of the ragdoll aftermath. In all, you won’t see anything jaw-dropping when watching Warhawk: it’s solid in all areas.
As mentioned earlier, Warhawk uses an amazing split-screen setup that lets additional players join an in-progress game by simply pressing Start. After they join the game, the screen quickly readjusts the screen to accommodate the new players… so fast, in fact, that players in a shootout during the split won’t miss a single shot. Leaving a game is just as easy: when they quit, the screen will again readjust. Warhawk makes it more than easy to get a bunch of people huddled around a single screen.

Getting the full audio experience requires a surround system. You’ll hear the 4×4 looking to run you down from behind (and the quick honk of the horn when they succeed), as well as your teammate’s Warhawk hovering above it to avenge your death. Everything has a believable and easily distinguishable sound that reacts very well to your proximity: you won’t likely hear a troop gunfight from across a large map, but you’ll certainly hear a flak turret or tank. Dramatic music will kick in during a tense part of a team match, usually when victory is near, and adds a nice touch to long capture the flag matches.

That is not to say the game is without flaws, as it seems several features were downgraded to make room for some of the more flashy features. Though clans are supported, placing a four-character tag in front of a character’s name, no more than 64 players can be a part of a single clan (at the time of this writing, a bug prevents more than 30 invitations from being sent, so the cap is even lower). There is no in-game messaging system, nor is there a lobby for players to join, so clan coordination is limited to the PSN, and with no in-game XMB access, the PSN is worthless to this end.

In-game chat can be activated by holding L3, which can make movement a little difficult. It would be nice to see Incognito follow the example of Insomniac Games in their shooter Resistance: Fall of Man by allowing players to join open-mic squads. Voice chat outside of game and the PSN (until we’re given access to the XMB) is a feature that should not have been overlooked.

Early problems have been plaguing the game as well, preventing many players from joining games, checking up-to-date stats, or even logging into the game. While these issues should have been remedied prior to release, online games do have the advantage of updates and patches, so most problems of this sort are superficial.

The game does just about everything right: even without a tutorial, it’s fairly easy to learn how to play, and once you’ve got it in your hands, you won’t want to put it down. There aren’t many games that can grab hold of you like Warhawk does on a per-login basis, and that is reason enough to sing its praises.