Call of Duty 4 (COD4) is one of those amazing experiences that will reaffirm why you love playing video games. Whether online or off, COD4’s tremendous graphics, sound, and game play all coalesce into an overwhelming package that is so fraught with peril, it instills players with respect for the men and women of the armed services. Not only is it by far the best game in the venerable Call of Duty series, it’s without a doubt one of the best first-person shooters ever crafted.

Unlike the previous installments in the series which focused on recreating 60 year old battles from the World War 2, COD4 takes place in the present and weaves a fictional tale which centers on preventing two bad men from launching a thermonuclear attack at American soil. Players will perform a wide variety of tasks as they alternate between the roles of a US Marine and a British SAS soldier as they attempt to prevent the launch of rogue missiles poised to destroy the East coast.

Half of the time you will assume the role of ’Soap,’a new recruit in the British SAS

Graphically COD4 is incredible to behold, but the most amazing thing about the graphics is that they run at 60 frames per second (double the frame rate of Epic’s masterpiece Gears of War) without sacrificing a bit of visual quality. At no point during the game’s numerous hectic firefights does the silky smooth frame rate take a nosedive, ensuring smooth immersive play and proving that the code ninjas at Infinity Ward are geniuses capable of extracting every bit of power out of your next gen hardware. Nifty video briefings occur in between missions that seamlessly mask all load screens, and amazingly these briefings fluidly zoom from a satellite image of your next objective to the first person perspective of your player on the ground, producing a feat of technological prestidigitation that is sure to impress even the most jaded gamers.

In addition to the luscious photorealistic imagery, COD4 has some of the best lighting in this generation, allowing players to take cover in the shadows. And for the first time in a first person shooter, COD4s snipers have Ghillie suits that actually work against human and computer controlled opponents alike, allowing stealth oriented players to remain invisible even if their enemy is standing directly in front of them. It’s a neat effect, and just one of the many ways in which COD4 impresses players with its realism and attention to detail.

COD4 character animations are eerily lifelike. When you get a headshot, the physics look frighteningly realistic as your opponent’s head snaps back and their body crumples to the ground. A result of this high quality animation is that it humanizes the characters on screen, making each death a grim reminder of the horrors of combat. When a team mate standing next to you goes down, you really feel (and hear) it on a gut level, creating an emotional response absent in the vast majority of war-themed games on the market.

COD4s audio is every bit as impressive as its visuals. Despite all of the explosions and gunfire that take place, NPC dialogue is frequent, clearly discernable, and always well written. Voice actors do a great job of injecting life into a genre typically devoid of personality, and many of the lines of dialogue are genuinely funny. In addition, complicated military chatter is peppered throughout the experience and lends an aura of authenticity to the proceedings. Gunfire and other effects all sound spot on, and COD4s excellent 5.1 audio allows players to detect enemy footsteps, hear grenades land, and generally remain aware of their surrounding environment at all times. The sheer quantity of audio that COD4 pumps out of your speakers can be overwhelming during the larger battles, but nobody ever said that war was supposed to be peaceful.

COD4s story is far more captivating than previous games in the series, probably because the fictitious nature of narrative allowed Infinity Ward more creative license than they had with their previous, historically rooted games. Immersive in game cut scenes tell the tale of a Middle Eastern dictator and a Russian mobster who are collaborating to launch nuclear missiles at the United States. Although it sounds like clichéd “stop Dr. Evil before he launches the nukes” stuff we’ve all seen a hundred times before, high quality presentation makes the material feel fresh and surprisingly engrossing. Without spoiling anything, I will simply say that when you have completed COD4s prologue, you will despise the antagonists, and look forward to taking them down. 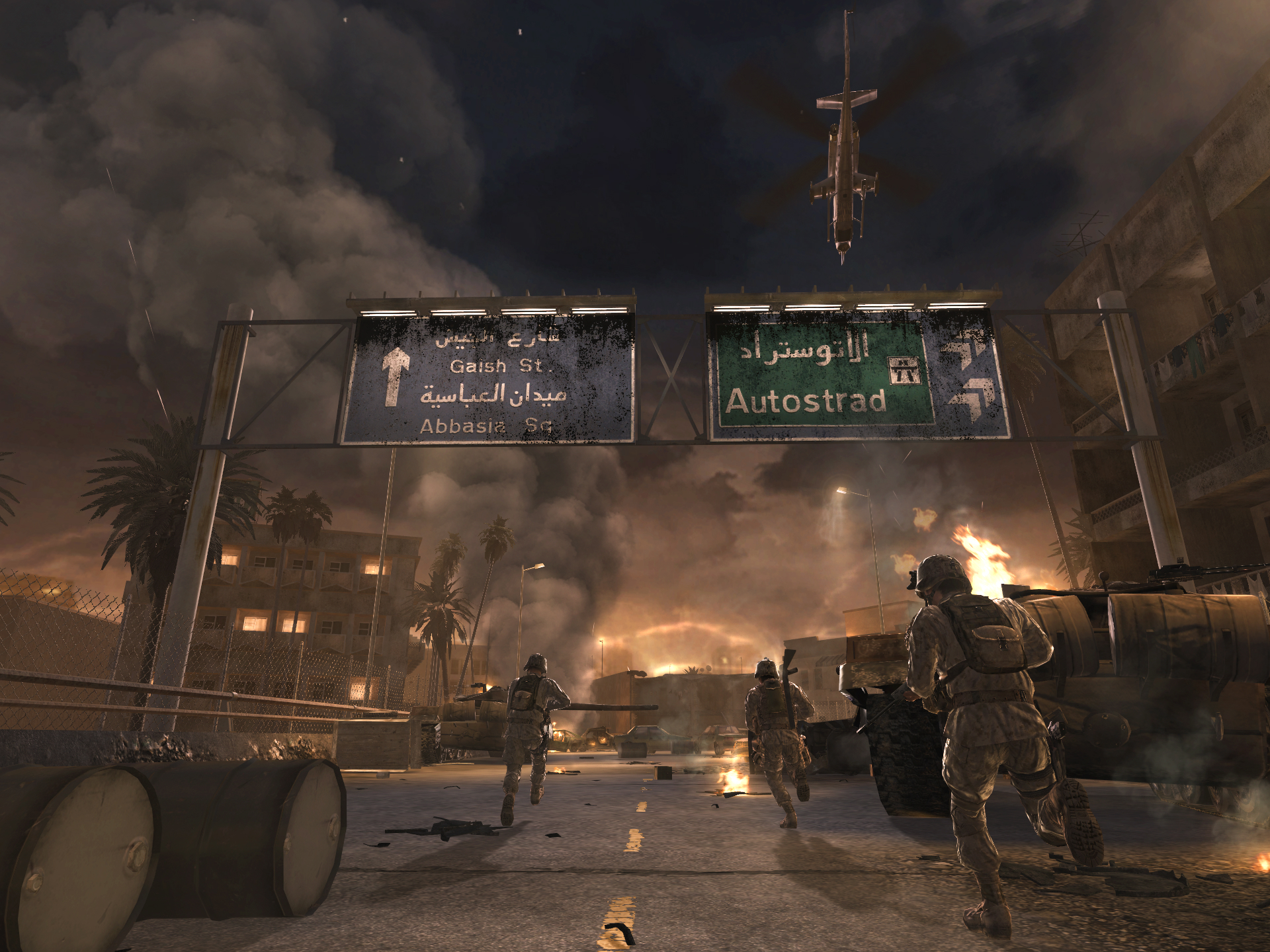 Although it’s set in a fictitious Middle Eastern nation, you could easily mistake some of COD4’s locations for Iraq. What an amazing coincidence!

Prior to its release, IGN reported that the story for COD4, “creates fictional conflicts and avoids any overt political commentary.” Fictional as they may be, the Middle Eastern portions of COD4 bear such striking similarity to recent events in Iraq that players could easily mistake the game as an Iraq war simulator. The Middle Eastern bad guy you’re hunting greatly resembles Saddam Hussein (aside from his goatee and the fact that he actually has WMDs,) and at one point you will lead an assault that involves toppling a statue bearing his likeness. Other controversial moments ripped from the headlines include SAS forces beating a prisoner for information in a display of Jack Bauer justice and a grisly televised execution. Despite the lack of subtlety, the similarities between COD4’s plot and current events are extremely effective at tapping into the fears of the American psyche, and the timely nature of the story is certainly more compelling than the equally heroic, yet increasingly stale battles of our greatest generation.

Game play in COD4 approaches perfection, and is a noticeably better than Infinity Ward’s previous titles. For starters, the controls are simple, responsive, and deep, and are easily on par with console FPS greats like Halo 3 or Rainbow 6:Vegas. In addition, COD4’s enhanced physics, equipment, and AI provide new game play situations that go way beyond the large majority of FPS games on the market. One of the coolest improvements to the physics allows players to shoot through walls. At last, you can actually kill enemies hiding behind plywood or empty crates! However, this sword cuts both ways: many times during fire fights inside abandoned houses you will scream like a little girl as a hail of bullets comes tearing through the drywall at your seemingly secure position. It’s a great addition, and really forces players to think about the battlefield in a whole new way. Friendly and enemy AI is noticeably improved from previous COD installments, as your squad takes cover intelligently as enemies flank around and throw cooked grenades at your squad.

The game feels like a tactical shooter, but unlike other games where you lead the squad, you instead follow orders, greatly simplifying the player’s workload without compromising the fun. If you try and rush ahead without the protection of your squad, you WILL get cut down almost instantly. Your commanding officer will have you perform a variety of tasks including breaching a room, setting a demo charge, or call in air strikes which mixes things up and keeps the player entertained with constantly changing battlefield conditions. New weapons like the Javelin rocket launcher allow players to enjoy the jump to the modern battlefield as they call down the thunder on a cluster of enemy tanks, and vehicle segments like the amazing AC-130 Gunship portion of the game allow players to experience action so realistic it could easily be mistaken for actual combat footage.

Mutliplayer matches are just as fast paced and as intense as the terrific single player.

While COD4’s single player portion is terrific, it’s the multiplayer matches that will have people holding on to their copy of COD4 for years to come. Up to 16 players compete on 16 maps in a lag-free online environment. As you play matches, you are rewarded experience points which unlock ranks, gear, new classes, and abilities. Furthermore, players are able to create their own custom classes, greatly adding to the variety of potential play styles. It’s all perfectly balanced such that players with a lot of experience will have access to different equipment and abilities, but since none of those abilities or weapons are inherently better than any of the others, it just gives the veterans more character customization options without spoiling everyone else’s fun.

In addition to custom classes, COD4 online brings two multiplayer innovations to the table: rewards for kill streaks and perks. The kill streak rewards gives players who are able to stay alive while racking up kills handy tools to help their team keep the up the momentum of a battle. Kill 3 enemies and you can call in UAV support, showing enemy locations on all your team mate’s maps. Kill 5 and you can call in an air strike, which brings up a map and allows a player to drop bombs on a large number of enemies at once. Finally, kill 7 without dying and call in a support helicopter which circles the map and automatically targets any enemies unwise enough to remain in the open. It’s a fun reward system that provides players with an incentive to stay alive, while allowing them to help their entire team in the process. The perks system is equally enjoyable. During character creation, you are able to choose between various abilities such as extra health, bullets that penetrate dense materials, and the ability to blow up your body with a grenade when you are killed. It’s a fun system that not only encourages you to keep playing, it helps keep the game feeling fresh and dynamic.

Really the only problem with COD4 is that the single player campaign is a bit on the short side, providing most players a mere 6-8 hours of game play. However, the experience is so superbly crafted it definitely warrants multiple play throughs. What’s more, the multiplayer component is rewarding and fast paced, making COD4 an easy recommendation for anyone with an interest in FPS games. In fact, the action is so intense, I found myself taking little breaks every half hour or so just to escape the horrendous conditions the game throws at you over and over again, which is saying a lot considering how de-sensitized I am to virtual warfare. COD4 throws a lot of data at your noggin, and it can be overwhelming… dare I say frightening at times, but it is, without question, one of the best gaming experiences I’ve ever had.