Capcom is no stranger to re-releasing classic games on download services. Final Fight: Double Impact, an arcade twosome that is comprised of the original Final Fight and mythical hack-and-slasher Magic Sword, proves their mastery over all things retro, as this compilation is one of the best available on Xbox Live and PSN.

For those who didn’t grow up in arcades, Final Fight and Magic Sword are a pair of side-scrolling beat-em-ups that were released as coin-ops in the early 1990s. While the basic ’walk and punch’ gameplay dates them back to the times of the first Bush administration, these titles hold up surprisingly well. Final Fight focuses on Mayor Mike Haggar and his quest to clean up the streets and rescue his kidnapped daughter. Magic Sword takes things in a slightly more medieval direction, as your character has to team up with other warriors to ascend a 50 level tower and defeat the evil Drokmar. The gameplay of each mostly boils down beating up everything that isn’t you, though random weapon pickups and massive boss fights add to the challenge. Death comes early and often in both games, as they were built to pilfer childrens’ quarters while their moms walked around the mall. Don’t let that discourage you however, as the combat of each game is easy to grasp onto and incredibly addictive. Each game only utilizes two buttons, which allows you to focus solely on driving your fist and swords into the faces of foolish punks. 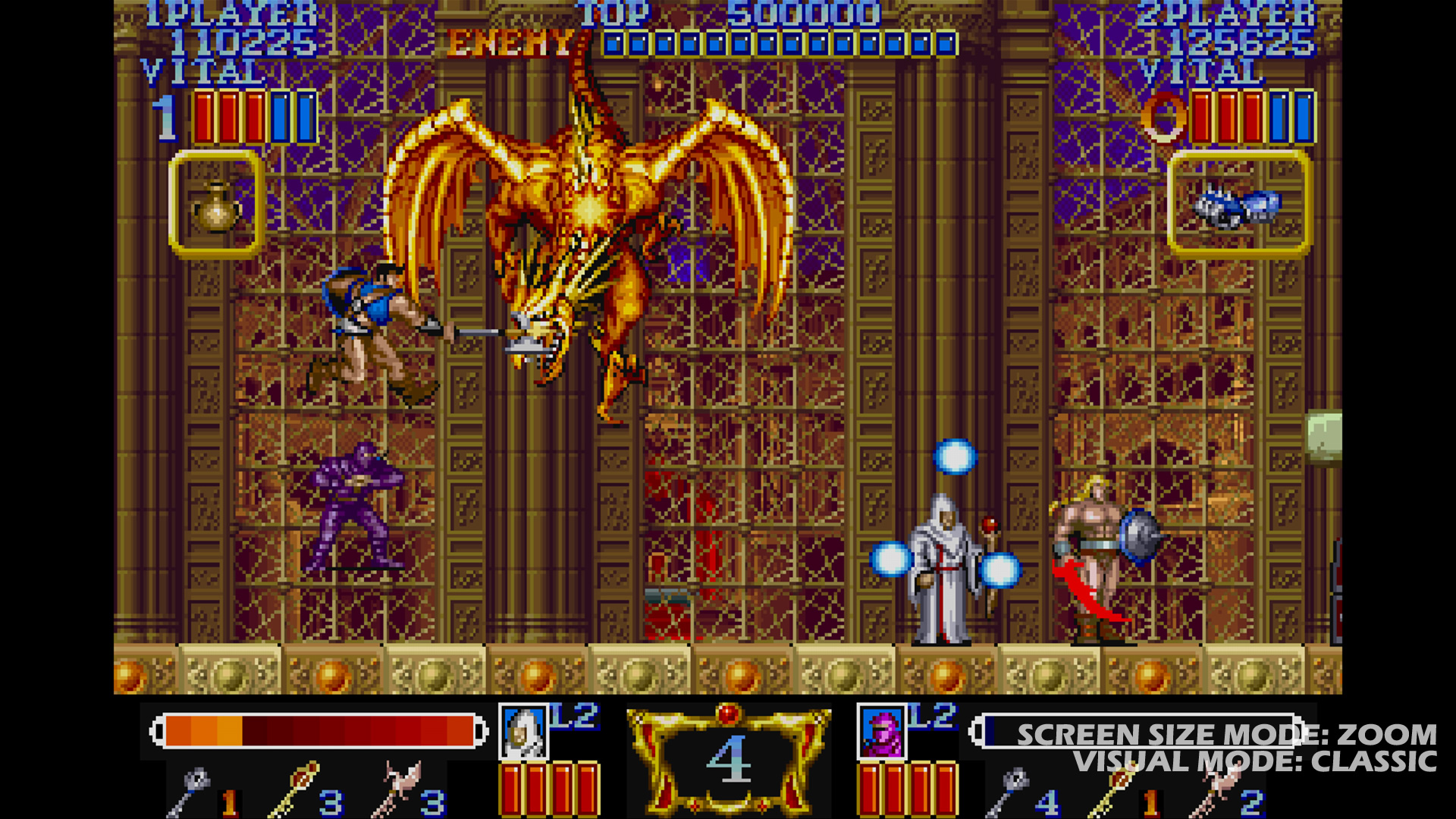 As was the case in arcades, the best way to experience these titles is cooperatively, and each game can be played online or off by two people. Capcom has worked their magic yet again, as neither game suffers from any latency issues whatsoever. This coop play really extends the life of each brawler, as the friendly competition helps keep the repetitive level down. Capcom has also offered a plethora of display options for each title, from the size of the screen to the sharpness and smoothness of the images presented. You can even pull up a mock cabinet around the action if you wish, and modify the screen to look like a worn, curved CRT arcade cabinet monitor. Why can’t Capcom take over development of Xbox Live Game Room to make everything look this good?

If all of that wasn’t enough, Double Impact also packs in an achievement-based challenge system that unlocks bonus artwork, comic books, and other awesome goodies. The only real complaint that I have here is that the games lack a pause button, as enemies can still attack you while you futz with the video settings. Of course, with so much love packed into this $10 retro romp, it’s hard to complain over such trivial things. Pick up Final Fight: Double Impact and be astounded, as you’ll finally see how well arcade ports can be handled given the right amount of attention.