Following on from titles such as Driv3r and 2 Fast 2 Furious, a shrewd NeoGaf poster has found that a Spanish gaming magazine has allegedly unveiled the next step in numbers-as-letters-in-titles: F.3.A.R. In my opinion it scores bonus points for also incorporating the series’ ridiculous acronym.

F.E.A.R.’s had a bumpy ride over the past few years, with Project Origin originally being developed without the recognizable name, plot or characters of the original because Activision held onto the rights after developer Monolith went and shacked up with Warner Bros. When the IP was shrugged off in Activision’s 2008 merger with Vivendi, however, Monolith snapped it up and quickly went about incorporating the F.E.A.R. franchise, and the recognizable, spooky antagonist Alma, into Project Origin.

This gives Monolith good enough reason to look into developing a third game, if you ask me: it would be foolish to buy an IP and shelf it after just one game. At the very least you’d make a kart racer before chucking it in the bin.

The biggest problem with F.E.A.R. 2: Project Origin, and the main reason Warner Bros might not be interested in a sequel, was that it wasn’t nearly as good as the original. But the Monolith team clearly has a vision for the series, what with the psychologically unsettling Alma eventually giving birth in-between trying to creep you out by putting ghosts on the screen every two minutes for the entire game. The DLC even revived former antagonist Paxton Fettel, who almost definitely has some kind of nefarious plan. 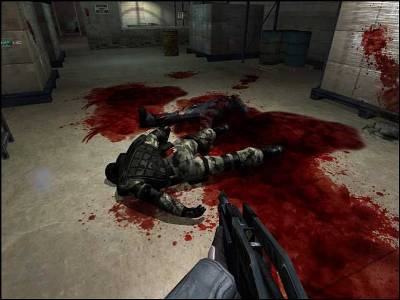 Will F.3.A.R be as happy-go-lucky as its predecessors?

Warner Bros will probably be more interested in sales figures than quality, mind you, and the sales of the first two titles in the series were almost definitely high enough to warrant another go-around for the psychological shooter.

On the proposed cover sits Alma in the middle, some new guy with a bit of facial hair and some curly locks on the left, and – presumably – Paxton Fettel on the right. At the bottom of the screen is a foetus sitting in the middle of the blast, which I imagine is an allegory for how women feel when giving birth.

At the moment Warner Bros’s refused to comment on the picture, but if you ask me it’s likely we’ll start hearing concrete details in the coming months.