The Twisted Metal series has an interesting history. A demolition derby of a game essentially, it also threw in as many weapons as it could, all in the name of car-based violence. With seven games, all eligible for Sony’s Platinum range, it was a huge success with sales in North America alone reaching over 5 million copies. And yet it’s a franchise that has yet to appear on this generation’s systems. That is until now, should media reports are true.

David Jaffe, co-founder of the Twisted Metal developer Eat Sleep Play, has never been one to keep quiet about the chances of a new Twisted Metal game. Back in 2008, he was hinting to GamePro that a Twisted Metal game was in development for the PS3. There was even a documentary included with the last Twisted Metal game, Head-On, which held a secret message, which once deciphered revealed that Twisted Metal was coming to the PS3. However nothing ever came to light. Then there was the uncovering of a "covert" piece of information via an email that Jaffe had published on his blog last year, cunningly blurring certain words out. Predictably an enterprising photoshopper unblurred the words and so the Twisted Metal rumors started up again.

Finally we come to the latest rumor, again from David Jaffe himself. He stated on his blog recently, "Just to be clear, I’ve never said we were or were NOT making a new Twisted Metal. Ever." He then went on to state that that if a new Twisted was on the way, he would "consider it a reboot", which surely states that he’s considering developing a new title. Or does it?

To me, David Jaffe feels increasingly like the boy who cried wolf. Past interviews shows that he loves to mention Twisted Metal and cause a bit of a fuss over it, but nothing ever seems to be announced officially. Sony’s consistently stated that there is no sign of a new Twisted Metal game, and surely they should know as much as Jaffe. Although the demand for a Twisted Metal game was there a few years ago when the series was fresh in gamers’ memories, we’re quite far into the latest generation of consoles and I can see interest waning fast. Perhaps a new IP would be a better direction for Jaffe; vehicular destruction is of course still going to be popular, but sticking to the Twisted Metal motif could be a bad move when it won’t be so engrained in the memories of this generation of gamers.

As it currently stands, the rumors are all simply supposition and as such I can’t see a new Twisted Metal title coming soon. David Jaffe hasn’t been reliable in the past with his hints over the years – at all. A much more likely prognosis for the year is that we see yet another rumor being spread by Jaffe at some point. It’s a shame as Twisted Metal was an enjoyable franchise when I last played it, quite a few years ago. It lacked finesse but it made for some great multiplayer battles. For now though, don’t expect a Twisted Metal game any time soon.

Poor little PSP Go. Where did it all go wrong? Sure, you were overpriced. Yes, you dumped the UMD slot for some ridiculous reason. And yes, your downloadable games were far too expensive. But you were so beautiful. Well, not beautiful, but you tried very hard.

Now, only four months after its launch, rumors are spreading as to a relaunch for the console with the hope that maybe this time round things will go better for the system.

It’s a vaguer source this time round with Gamervision.com reporting that a Sony insider has confirmed that a relaunch is imminent along with renewed marketing hype and even the possibility of a price drop. The PSP Go could certainly do with a price drop considering it’s widely regarded as a bit of a flop in comparison to the original PSP’s sales figures of 51m since launch. Sony seemingly hasn’t even released any details regarding PSP Go sales figures, suggesting they’d really rather not talk about it. I experienced the marketing hype by seeing adverts for it at seemingly every cinema viewing last Autumn but I’ve still yet to meet someone who actually bought it, so more needs to be done than simply advertising – price drop-type more.

It does all seem rather soon for a relaunch though. It’s only been four months, a ridiculously short time for Sony to feel the need to hype things up again. Rather than a full relaunch, could it be that Sony will be pushing the PSP Go extra hard at the likes of GDC and E3 this year, attempting to ensure the unpopular system gets enough glowing coverage? Possibly rather than relaunching the system, there could be some price drops within the PSN store which would encourage gamers to switch to digital downloads rather than buying games on physical media. Price drops are certainly needed considering the amount of downloadable titles that cost more than buying a boxed version. If Sony manages to get the right balance between price and convenience, the PSN store could really take off in a manner similar to Steam for the PC. Perhaps this is what needs a relaunch rather than the console itself.

In terms of this rumor, however, it’s all a little bit vague to give it the Rumor Killers seal of approval. For now, as much as I’d love it to be true, I’m going to have to say false. I wouldn’t be surprised to see some form of PSP Go announcement appear in time for GDC though.

Editor’s note: Jen wrote this piece yesterday, but rumors are a speedy beast. Since her submitting the piece, Sonic 4, a direct sequel to Sonic 3 and Sonic & Knuckles, has today been confirmed by SEGA as an episodic, digitally downloadable release for the PS3, Xbox 360 and Wii, and it will be a 2D sidescroller with 3D graphics. The first episode is expected this summer. I considered not posting this part of this week’s Rumor Killers because the rumor’s now been and gone, but I thought it was only right to respect Jen’s ever uncanny ability to predict the course of the rumor. Obviously we are posting this after the news has emerged so we can’t make a song and dance about how we got it right. Take our word or not, it doesn’t really matter. Either way, Jen outlines a nice history of the rumor and offers a few thoughts on how she’d like it to turn out if true, so hopefully it’s still a good read. 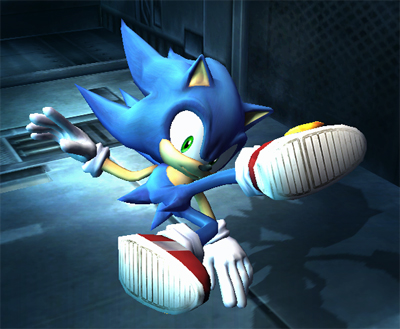 Remember when Sonic the Hedgehog was brilliant fun and a true classic? Sadly, if you’re under the age of 18 then you probably don’t. His glory days of the first three Sonic games, all with Metacritic scores of over 75%, seem to be over. There’s been a dodgy few years with a decidedly iffy selection of games released in his name such as the hideous Sonic The Hedgehog (not to be confused with the Genesis classic of the same name) with its Metacritic average of 43%. Despite this, people can’t help but be excited over the rumors of a new Sonic game, even better a game that might return the spiky hedgehog to his roots.

TSSZNews has unearthed some interesting news regarding a possible ’Sonic the Hedgehog 4’ game. Not a spin-off this time round, an actual sequel to the original three brilliant platformers for the Sega Genesis. It’s thanks to an eagle-eyed reporter for the site who noticed that sonicthehedgehog4.com has been purchased in the last few weeks by Brandon Klein. It’s a name that’s not exactly instantly familiar, but in a roundabout way TSSZNews has unveiled some pretty conclusive evidence. First of all, the address registered to the domain name purchase is based in San Francisco. It’s not based at Sega of America’s current locations but instead a law firm, suggesting possibly that Sega are planning ahead. The same can be said of the corresponding telephone number which is based in New York and linked to a consulting and strategy firm known as Collaboration King, owned by Brandon Klein. Again it still all seems a little tenuous, but dig around in the WHOIS information for the domain name and another name appears in the admin contact box: Brandon Laurino. One quick search through LinkedIn and TSSZNews discovered that Laurino is Sega’s Community and Online Director. Jackpot.

A few other bits of information have been discovered regarding Sonic the Hedgehog 4. Sega has announced ’Project Needlemouse’ on their blog after building up some hype during January by releasing teaser information daily. The blog revealed that Sonic will feature on his own at last after various rumors surrounding whether he would be accompanied by others which has been the case in the likes of Sega Superstar Tennis and Sonic & Sega All Stars Racing. Finally, a break from recent trends where Sonic has featured alongside many other low-key characters. Surely it’s time for a proper Sonic game again? Sega also released a piece of concept art from the new game of an enemy which will look extremely familiar to old school Sonic gamers. It depicts a crab robotic monster which no doubt conceals a trapped animal as was the case in previous Sonic games. It looks extremely reminiscent of the 2D gems we all used to love.

It’s all looking extremely promising for a new Sonic game to emerge sometime in 2010. TSSZNews are a well established site, having been around over 10 years, so it’s a pretty credible source. An interview with Sega’s associate brand manager Ken Ballough late last year also revealed a new game in 2010 and suggested it would be a 2D adventure. Of course it might not be entirely clear cut. A 2D Sonic Adventure could be more akin to Sonic Rush on the DS, a pseudo action RPG which, although fun, still wasn’t as great as the original games on the Sega Genesis.

Could it finally be time for Sonic’s return to past glory? Admittedly an impossible question to answer at this stage, but a return to focusing on everyone’s favorite blue hedgehog and a 2D environment could be exactly what’s needed. A reboot like this has worked well for the Mega Man series which, despite faltering over the years with the likes of Mega Man 64, is now enjoying huge success with the retro continuation Mega Man 9 and the forthcoming Mega Man 10. Most crucially it’s achieved this success by returning to its roots and sticking to the NES look and feel of things. Could this be the case for Sonic? Potentially I think the latest Sonic 2D game could stick to a more traditional graphical style and focus on mastering the old style of platforming rather than throwing in gimmicks which detract from what made the series so fun to begin with. A return to the speed which Sonic brings would be particularly welcome and very possible too. The evidence looks compelling that, regardless of the quality of the game, we’ll be seeing another Sonic game very soon.