THE GAMES REVIEW: Okay. So do you mind stating your name and who you work with for our readers?

MATT WEST: I am Matt West, and I work with CNN.

THE GAMES REVIEW: So, CNN, small publication, never really heard of them. [Laughs] What do they do?  What division do you work with?

THE GAMES REVIEW: Are you a gamer yourself? 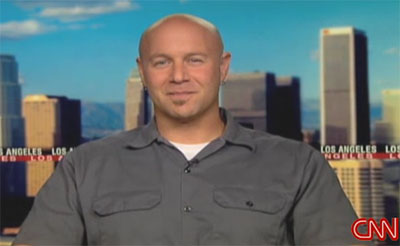 THE GAMES REVIEW: How long have you been gaming?

MATT WEST: Pretty much since the arcade era. Back down to table tops.

THE GAMES REVIEW: Okay, you’re a vet. So, what is your lineage? How did you get to work for CNN?

MATT WEST: Well, I had been working in broadcasting since I was in college. I started in radio. I eventually made the leap to television. There have always been elements, whether it was in school or through working in radio, where I had been exposed to television, but I didn’t focus primarily on that until a good 10 years into my broadcasting career. I made the transition into television via news, by working at a local TV. station in Los Angeles. From there, I was able to transition into bigger stations and bigger companies and eventually made the leap across the street to CNN.

THE GAMES REVIEW: Oh, wow. That is awesome man. So if you had to give anybody some good advice about how to get into working with CNN or working in the games industry in general, what kind of advice would you give people?

MATT WEST: I think typically there is a shift right now, where the bloggers and the bloggersphere is providing editorial counterpoint to big news organizations like CNN, like traditional newspapers or like USA Today. There is certainly viability in sticking to that route and saying, well I am only going to be on a blog, or I am only going to work for a web site where the journalistic standards are not as stringent or non-existent. So, if somebody wanted to maybe transition out of blogging, blogging is a great opportunity to hone your craft in terms of writing and reporting and storytelling, but if somebody wanted to make the leap to a “legitimate news organization,” the need to study hard. Go to communications school. Study communications in college or university. Study elements of journalism in college or university. Write really well. Try and get an internship either at a local radio station or local television station, where you can get some experience in the environment and learn about what journalism is. There is a tendency on blogs to report rumors. To say,  “I heard this, such and such reports that, or my friend told me this. I mean it’s great because there is a hunger for information, so there is always a place for it, but what is dangerous about that stuff is once it is put out there, a lot of people don’t understand the difference between the truth and a rumor. Once it is printed somewhere, it is often taken as fact and reported as such until it is either shut down or disproven.

THE GAMES REVIEW: So, what do you do? How do you tell the difference between something that has journalistic integrity behind it, where somebody has researched the source etc., and something that is actually just a rumor?

MATT WEST: Well, the funny thing is people tend to look, or they ignore the fact that gaming is an industry.  While it may not be as well developed and a well oiled machine as Hollywood on a publicity side, it is an industry, and it has a structure to it. There are products, and there are protocols. There are release dates that companies have to maintain in order to do their job and in order to market their product carefully. That is what we are talking about, a product based industry. The thing is I have to rely an awful lot on good relationships with publicists, where in order to get the information, I need to maintain good standing with them. I need to make sure that I am not reporting things out of turn, and the difference is, I can hear a rumor. It can seem like it makes a lot of sense, but the difference is I can’t just print that rumor. I can’t say, such and such game blog.com says this. What I end up doing a lot of time is taking that rumor, digesting it a little bit, and then looking around and seeing what the rest of the buzz is. Having an understanding of how the industry works is very helpful, and then calling, making that phone call and saying, what can you tell me about this.

THE GAMES REVIEW: Talking directly to people or customers.

MATT WEST: You have to talk directly to them, and that’s the difference. The blog wants to get out and get it on first. Whereas I and the rest of the real news organizations, if you will, want to get it right. That’s the difference. My credibility and the credibility of my colleagues at the larger publications is on the line with every line that we write, especially with a lot of focus on the internet where a lot of my content is generated and lives, there is so much scrutiny. You have to get it right.

THE GAMES REVIEW: You say one thing and somebody out there, whether it is one of the bigger blogs that is really being watched, or even N4G, which collects an aggregate of news, is going to take it and run with it. They are going to look at it, and they are going to analyze every single word. They are going to basically say, well if he is saying that, this might be true.

MATT WEST: The other thing that people need to learn and understand is that you can’t just take information that you absorb and put it out there without giving people perspective. I think a lot is taken for granted in the sense that the hardcore gaming audience that read those types of blogs and follows those trends is that what they read is the gospel. Also, the people that are writing that and putting that out feel that everybody is a hard core gamer. There are people who are interested in gaming, who may not know all the ins and outs of things. A lot of times, you have to put stuff in perspective. Having a background in journalism and storytelling gives you an opportunity to learn how to put things in perspective. You don’t just take one fact, but take one fact and look for other facts and try to create a larger perspective to tell your story. When you do that kind of thing, you check your facts; you maintain good relationships with publicists. You are telling a version of the truth. Or you are telling the truth as close as you can get to it, which is a lot different than just taking something and posting it.

THE GAMES REVIEW: Smacking it out there and let people decide if it is interesting or not.

MATT WEST: But again, it’s not that it’s not interesting when it is on a blog, but it may not necessarily be right, and that’s the difference. That’s what we have to do. I am held to a very serious structure of standards and practices that need to be maintained because of our reputation as a whole.