Let’s face it, Burnout has pretty much been the epitome of what gaming is all about: escaping from reality. Complete events for medals that involve driving very fast cars, racing while crashing other opposing cars, crashing your own car or just driving your car into a busy intersection and blowing it up. Yes, Burnout is indeed a fine example of escaping the reality of being trapped behind an elderly driver who isn’t even driving half the speed limit. Although, we must admit, Burnout 3 took it a little too far by adding screams while you controlled your burning wreck of a car in slow motion… some of which sounded like children. A little too far indeed.

But the same could be said for Burnout Paradise in terms of taking things ‘too far.’ The fifth game in the series (let’s forget the average spin-offs for PS2 and PSP), Burnout Paradise looks to evolve the game from random events that were straight up carnage; to a Test Drive Unlimited style game with lots of crashes but, from the impressions we got from the demo, not a lot of carnage. It’s a little ‘too far’ of a change from the formula. 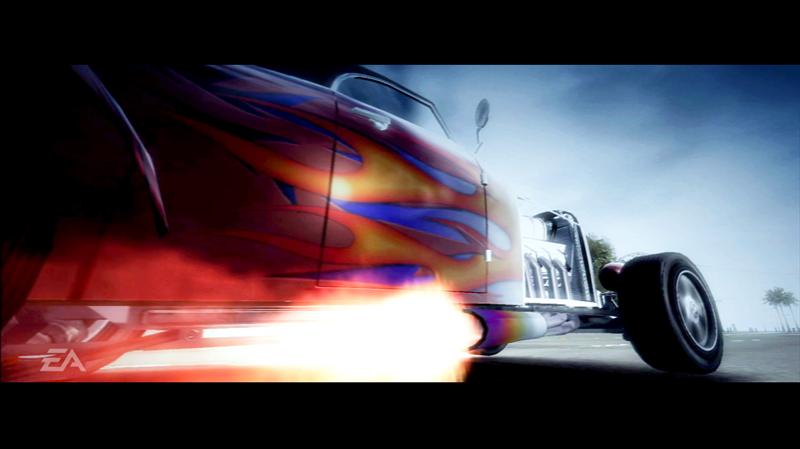 First off, let’s get the formalities out of the way. British-based developers Criterion are once again at the helm, and this time we’re off to a place called ‘Paradise City.’ Yeah… I’m not going to do the Guns N’ Roses reference line there. Oh wait. Anyway, there are three districts to discover in the recently released Xbox 360 and PS3 demo: Big Surf Beach, Ocean View and Motor City. The first massive change to the Burnout series is very noticeable. You can drive your car around the streets without taking part in any events. What is this? This isn’t Burnout. It’s more like Test Drive Unlimited! Events are found by making your way to traffic lights and starting the event from there with a press of the gas and brake.

In the demo, we are treated to a couple of events: a ’Stunt Run’ and a race. Let’s start with the Stunt Run, a new feature to Burnout. To complete this event, you must acquire 50,000 points. To get there, you have to do all the things that can score you points; such as stunts, drifting, catching air. You also get multipliers for doing such things as barrel rolls off of jumps and catching big air. It’s a bit like the Tony Hawk games, except with cars. You really have to combo together to score those 50,000 points. The demo version isn’t too great, considering you’re traversing around in quite a dodgy old banger of a car. But considering the videos we have seen online, the potential for this mode is awesome and we imagine the sense of speed will give it what it needs to make it great.

The ‘race’ though, isn’t so much of a race. It’s the old checkpoint-to-checkpoint mode, where you must reach the finish line in time. The demo version is, again, not that fun – but we are sure the faster cars will change that. Another thing to mention is that the points system has been removed. In Burnout 3 and Burnout: Revenge, you would get cash or points for doing certain things. Now, it seems to the case that if you pass an event, it’s put on your driving license (the game’s stat tracker) and that’s it. No points, no Gold medals for going beyond the Call of Duty and driving faster. We may be wrong, but we’ll see when the game arrives.

Also worth mentioning, despite being absent from the demo, is the new ‘Showtime’ mode. This is effectively crash mode from the previous games. Showtime isn’t an event in itself though. Anytime while you drive the streets of Paradise City, you can hit the gas and brake together to crash your car and watch as mayhem ensues. The great thing about this is that you can really enter Showtime anytime. During a quiet drive down Ocean View, or halfway into a race – Showtime is most certainly a next-gen feature. 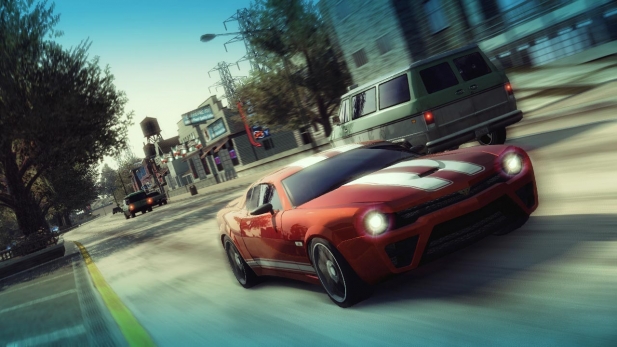 “I’m sorry Officer. I didn’t mean to drive that fast…it was all a motion blur…”

And to continue the positive aspects, there are great features to complement this next-gen feel, such as the Gas Station. By driving, or racing, through one of these, your boost meter is re-filled. It’s a good feature, and it will prove vital to know where these are located when in a race. There is also the Repair Shop, which fixes your car up when you drive, or race, through one of them. Probably the least effective towards your race though, are the Paint Shops. As you can probably guess, these can be used to change the paint job on your car. It’s not going to help you win a race, they’re just, you know, cool. Similar to these features is the ‘Junkyard.’ This is where you can change what car you are driving. So while all of this is very next-gen, what about the graphics?

The game is, thankfully, great looking. First of all, we must say that the car deformation when a car is crashed is staggering. The level of detail might surprise you, or it might not surprise you; either way, you should be impressed. The game also has a pretty smooth engine that runs at about 60FPS; the same as most of the other games in the series. One gripe with the graphics was that it was hard to tell a wall from a turn at times. It’s not that this writer is as blind as a bat, it’s just that he has been partial to the massive you-can’t-miss-them, almost cartoon-ish, signposts from the previous games. Overall though, the game is distinctly pretty.

The crashes are also just as impressive audio-wise. We’re sure your 5.1 set-up will joyfully deliver you the beautiful sounds of you whizzing by other cars, before crunching into a wall. The demo soundtrack features a few classic tracks from the original set of Burnout games; created by the developer. Though the final game will include artists such as Alice in Chains, Faith No More, Guns N’ Roses (obviously…), Killswitch Engage, N.E.R.D, Soundgarden and many more. A few classic composers are also there to balance the rage and serenity out, such as Mozart who features in the demo when you stop your car and the game proceeds to give you a little showing of how serene Paradise City. That’s before you re-start your car and crash straight into a fence… then Mozart’s gone.

The radio station, Crash FM, has also returned to Burnout after being absent for most of Burnout: Revenge (it only featured in the tutorials and intro movie). Whether this is a good thing or a bad thing, remains to be seen… we all hated DJ Crash from Burnout 3. But this new guy isn’t so bad. His name’s “DJ Atomika,” who also featured in SSX 3, and thankfully he’s less imposing than the old guy. Although his comment on my driving license picture (an actual picture of me), was less than satisfactory. Apparently, I’ve to get a photo that’s “more personal” than my actual face. Thanks DJ Atomika… 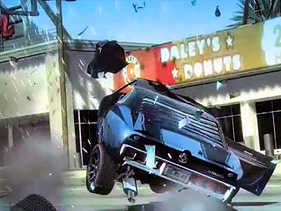 “Be damned if I’m gonna clean this mess up!”

The demo is rounded up nicely with an Online mode. When driving around on your own, a quick press of a button takes you to the ‘Easy Drive’ menu. From there, you can transfer yourself to online mode and have your friends join you or you join them. It’s very nicely integrated. You can either race or just do ‘Freeburn’ mode. In this mode, you and seven other friends can race around Paradise City. The host can set a challenge for everyone to work towards which can involve co-operation (such as getting all players to the top of a building via jumps) or rivalry (who can make the longest drift). It’s a fun idea, as is the Vision cam support. If you takedown someone online, and they have the Xbox Live Vision camera plugged in, the camera will take a snapshot of their reaction to your takedown. We are sure there are many laughs to be found with this feature in the full game. Once again, it’s another fun idea.

And that’s what the game seems to be setting itself out to do; be a bunch of fun ideas, rolled into an open World format. While Burnout Paradise is impressive for what it achieves, the fun factor isn’t as high as previous iterations in the series. Though, the demo cannot obviously fully represent the game. But with it due at the end of next January, we can’t see it changing. That being said, the faster cars will no doubt be a blast to ride, and we still hold out hope that Burnout Paradise is going to be a great game. We know it’s a new evolution to the Burnout series; we just hope it’s the right way. Come back early next year for our, no doubt, imminent review of the full game. Until then, check out the demo on the Playstation Network or Xbox Live Marketplace.