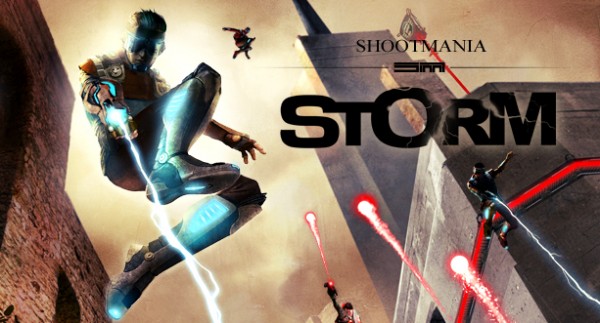 The trailer of this game was pretty impressive. An in-game info that claims that the trailer was made with only the game tool amazed us. An open arena where a number of similar looking characters in red and blue outfits cross over each other in an attempt to win the game is not new to the gaming realm, but its representation sure is! That’s when we decided to lay our hands on this one.

Developed by Ubisoft and Nadeo, the game is based on the titles of Trackmania and its series of characteristic features. One of the areas where the game sells is in its balancing act. It blends in proportion, the elements of a first person shooter game and the features to create and edit their maps. Some of the other notable features offered by the game are.

The default game has a free-form map and throws in much challenge to the players in finishing the stage. The game revolves around two teams with four players each (single person mode also available) who go on a capture-quest. The game mode can be of a quick-fire type, or a battle mode where the primary objective is to emerge victorious. The interesting factor added here is that this can be done from one of the several maps offered by the game, and if felt monotonous, the gamers can create one of their own and call for a showdown.

In an attempt to maintain the thrills of a first person shooter game, the weapons offered depends upon where you stand. Yes, the terrain decides what shot you make! One of the most common weapons offered by the terrains is the plasma cannon that has an infinite range with a straight-hit. Standing on a wooden terrain offers you a corresponding shot and taking a stance on a metal terrain will offer you with a much more lethal lightning gun. This mechanism eliminates the need for you to frenetically scroll between the various weapons in the inventory and selecting them before you trigger your attacks. So, all you have to do is sprint to the terrain you prefer and stun your enemies.

Though the range of weapons offered is commendable, the vital twist in the game play lies in the attacking mechanism. A recharge bar placed in the game determines the number of times you can fire your opponent. Mostly, this is restricted to five times and once your shot-count is over, you have to trail back to the recharge bar and reload your attacks. One of the greatest advantages of this system is that it greatly reduces the occurrence of spamming and cheats.

The game not only turns out to be an interesting venture for the avid fans of first person shooters, but for the aspiring game developers as well. The interface is easy and offers a grid in the form of tile that allows the players to easily create and come out with a map of their own. Advanced aspiring game developers can even make some modifications in the code to develop a much personalized and detailed arenas and maps. Some of the elements of architecture offered by the game include a raised runway, bounce-spots, bridges, tunnels, channels and jumps. All these elements can be used by the players to develop a unique arena with incremented difficulty levels in every map they create.

Nadeo’s attempt to revolutionize the Do-it-Yourself style first person shooter eSport is highly commendable. With a number of options to create, edit and share a map and impressive game play features such as the ammunition based on terrains and recharge to attack style combat techniques – the game is quite a winner. Go for it if you want to experience a distinct aspect of FPS. A Thumbs Up!

This is a guest post by Mark Bennett of Onlinecomcast.com, a site that offers savings and current information on cable and internet. To get the best, get internet and cable from Onlinecomcast.