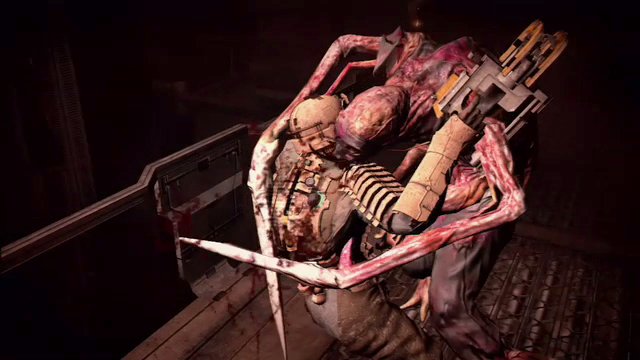 Fast-forward 500 years into the future, where interstellar mining is alive and well, not to mention the destruction of entire planets in order to extract ore that can be sold at a hefty price. The Concordance Extraction Company, or C.E.C., is charged with tasking mining ships with this mammoth deed. Just when things appear to be running smoothly, a distress call is received by the C.E.C. from the USG Ishimura.
The Ishimura, a “planet cracker” ship, is responsible for obliterating planets so that the ore inside can be collected for profit. The C.E.C. decides to send Isaac Clarke, an engineer employed by the C.E.C., and two squadmates to evaluate the situation. However, upon arriving on the Ishimura, Clarke and his squadmates discover that what appeared to be a simple malfunction has gone terribly awry. A terrifyingly hostile race of beings known as Necromorphs have overrun the ship and have jeopardized the survival of Isaac and his party. The three are separated, and Isaac is left to fend for himself out in the deepest, darkest reaches of space, left only with the Necromorphs and every bit of his wit that he will need to use to survive.

Dead Space, EA’s latest entry into the survival horror genre, wants to make sure that you feel the same level of dread and terror that Isaac Clarke experiences traversing the echoing, empty passages of the Ishimura, a ship that was once home to crew members who never knew what was coming once the Necromorphs’ infestation took place. Did they suffer? Would anyone else be coming to help or was it too late? In Dead Space, no one can hear you scream, and that’s just how the developers like it.

Presented in a format reminiscent of Gears of War or Resident Evil 4, gamers will be charged with keeping the space engineer Isaac Clarke alive until he can get to safety or until he gets to the bottom of the Necromorph invasion. Traversing the formidable Ishimura will be done while looking over Clarke’s shoulder in a third-person view. It’s an atmospheric, disquieting journey that showcases the Gothic elements present that the Dead Space team decided to implement in order to set the game apart from the rest of the pack. Massive, cathedral-like spaces are spread near and far throughout the behemoth ship that owe their design motif to the impressive architecture of the olden days, when ornate decorations worked together in a marriage of aesthetics and function. Creators found it a matter of looking to the past to create something entirely new with a classic foundation, which was elaborated on further here in a recent news post.

From recent screens and videos that have been released to a hungry populace of gamers, it’s easy to see that Dead Space has been lovingly crafted to look the best that it can. Gameplay videos reveal a very dark and gritty, space-urban landscape with loads and loads of gore that will satiate anyone who’s ever longed to see the entrails of a man strewn along the floor of an abandoned mining ship. Clean, sharp, and austere, it’s obvious just by getting a good look at screenshots that this game is not out to coddle or to comfort. It simply wants to scare the crap out of you.

Lurking in any shadow, nook, and cranny could be one of the terrifying, hideously malformed Necromorphs that seek only to tear you apart. As an alien race whose name literally means “corpsechanger” in Greek, they infiltrate their hosts (in this case, the crew of the desolate Ishimura) and mutate the original organic materials into something completely inhumane. What was once a crew member could now be a lumbering, 6-limbed, hellish beast whose one-track mind is set on picking the flesh from your bones. It’s obvious that in order to retain any semblance of safety, Isaac will have to rely on the tools he brought with him to combat the alien menace. What a bunch of lookers those baddies are. Sandy, flesh-toned, creatures that resemble some kind of mutated insects rather than the humans they once were. Abominations with gaping mouths and misshapen limbs, and even the offspring of such will be eager to feast on Isaac.

Seeing as this wasn’t expected to be a trip through hell itself, Clarke didn’t exactly come armed with conventional weapons, but he did bring mining tools, which work just as well. Amongst some of the weapons that have been showcased so far are a small pistol known as a 211-V Plasma Cutter, that seems to work well when working with precision aiming, a circular saw spinning in the air in front of you (otherwise known as the RC-DS Remote Control Disc Ripper), and the IM-822 Handheld Ore Cutter Line Gun that releases a long, sharp string of some sort that can be used to cut through the nasties throughout the ship. Rudimentary weapons, since that is not what they were intended to be used for, but when you’re stranded in space and surrounded by danger, you’ll take what you can get.

Of course, simply aiming for heads simply isn’t going to cut it anymore. Instead, gamers will have to employ the tactic of strategic dismemberment, meaning that you will need to incapacitate the creeping atrocities before it will be possible to dispose of them once and for all. Headshots are now a thing of the past, unless it so happens the head is one of the appendages you’re looking to get rid of. This proves to be a promising addition to what otherwise could have been a fairly normal, hackneyed combat system that you can find in virtually every shooter/survival horror title that’s been made. When methods that previously seemed foolproof are rendered useless, it’s much more cause for panic than if you could just grab the errant shotgun and blow some heads off. I’d liken strategic dismemberment to taking a Riot Gun to the Ganados in Resident Evil 4, blowing their heads to pieces, and waiting for Las Plagas to surface their filthy heads. It wasn’t the answer then, now was it?

Amongst the alterations made to keep Dead Space ahead of the pack when it comes to familiar conventions is the decision that the team made to keep a HUD and menu screens out of the picture. Every bit of vital information is displayed through usage of holograms or consoles on Isaac’s equipment. In a video released showcasing a bit of the opening moments of the game, a crew member (presumably one Isaac traveled to the Ishimura with) is seen on a hovering intercom near Clarke’s face as he jets to safety after witnessing a Necromorph tearing companions limb from limb. It’s a winning touch that takes a bit of the third-person feel out of the game and involves the player rather than alienating (pun intended) them. Not to mention, the faint blue glow of each interface is strikingly gorgeous in dark corridors and wide open areas.

Traversing said open areas will also be quite the departure from what you’re used to. Implementing “Zero-G,” there will be mind-bending gravity puzzles to navigate correctly. For instance, if there’s an open door on the ceiling, you might have to float all the way up there in order to open it, or you might be required to float in endless space along with pallid corpses of the slaughtered Ishimura crew, or Necromorph hostiles just inches away. This will call for some quick reflexes and attention to detail, because when manipulation of gravity is an option, you might just have to think outside the box in order to get from point A to point B. Rest assured that you will be putting that head to good use, and frankly I’m thrilled to see what the team has come up with as far as nefarious, dangerous challenges go.

Dead Space is the kind of adventure that was meant to be played alone—meaning best played in a dark room with the door locked and without friends to play co-op or multiplayer. Rich Briggs elaborated on this with TGR recently, but gamers will have one constant companion throughout their journey: sound. A full orchestra was sought to record the lush, string-heavy tracks for the score, and as seen in recent gameplay videos, it has a very Hitchcockian or Stanley Kubrick feel, borrowing heavily from music swells heard in horror classics. Strings effectively draw tension, and will be audible only in the most appropriate moments with Dead Space’s “Fear Emitter” system, meaning the closer in proximity you are to something that could potentially take you out, the scarier your surroundings will sound. Choosing not to rely heavily on music only, the team has ensured that in high-tension moments, such as the chase scene in the beginning of the game where Isaac is being tailed by a very hungry Necromorph, the focus will switch from adrenaline-pumping orchestral movements to the chilling beat of the engineer’s heart. Just like you’d hear in real life, in a high-drama situation.

Taking cues from horror movies, Dead Space is going to be all about the pacing. Never fully letting your guard down, it seeks to send chills down your spine, and to get you in the habit of dreading rounding corners where the unknown lurks. It wants you to think on your feet, and to get into the mindset of one Isaac Clarke, a simple engineer who was in the wrong place at the wrong time. With promises to be a 15-20 hour roller coaster ride, there will be plenty of time to lull gamers into a sense of false security before unleashing a behemoth Necromorph on the unsuspecting player. Take it from me—deaths are gruesome, so it won’t be pretty if you screw up.

Dead Space is shaping up to be one of the most innovative takes on the survival horror we’ve seen since the drop of Resident Evil 4, but how will gamers react to the facets that turn it into something new and delicate? There are many questions to be answered, and many aspects of the game that have not yet been showcased. Where did the Necromorphs come from, and why are they here now? Will Isaac be able to avenge the crew of the Ishimura?

Will Isaac live to tell the tale if he does?

Dead Space drops October 14th, so you have plenty of time to pick it up before Halloween. That’s next Tuesday, so let’s suit up, and move out. There’s some alien scum to eliminate.