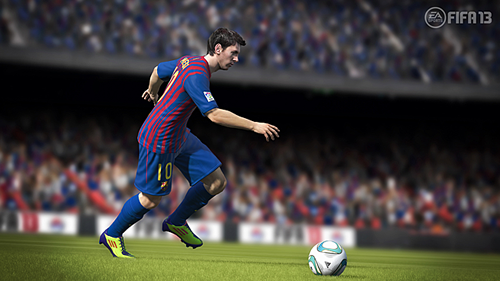 Once upon a time, the Fifa series was marred by critics who felt the game lacked realism and depth. Notably in Fifa 2001, gamers realised they could cross the ball into the box, the next player unleash a bicycle kick, and it would happily slot into the back of the net, every time. Against even the best of teams, you could be scoring a few dozen goals every game.

More than a decade later, football technology and player AI has progressed to an unprecedented level and the Fifa series seems to have blown competitors out of the water. On the 23rd January of last year, it was announced that Fifa 12 was the best selling sports game of all time. Is Fifa 13 even better?

One of the biggest improvements to Fifa 13 is the impact engine. The impact engine, 2 years in the making and introduced in Fifa 12, controls how the players are effected by their environments. In Fifa 13, the impact engine has in subtle ways been tweaked and improved offering an even more realistic experience than Fifa 12. EA have clearly taken on feedback to improve general issues that were seen in the last game.

One of the great things about Fifa 13 is that it will always keep itself updated. Along with live updates of player stats, current form and any transfers, for the first time commentary can now be updated to keep at pace with the footballing calendar. The loading screens are now more enjoyable, and take you into a series of skill sessions before your game begins. This is a great way of improving your game and at the same time beating the loading screen.

Clearly Fifa 13 has built upon the success of it's predecessor, making significant improvements to the impact engine to make the core footballing experience even better than last years. There have also been many great improvements on the side, expanding the career and player modes and adding even more leagues to the game. If you get your kids the FIFA 13 at Tesco today, you'll be getting them more than just a game, it's the whole footballing experience.