Electronic Arts’ Digital Illusions Creative Entertainment (EA DICE) have proven to be a talented group of developers time and time again with a number of successes in their critically acclaimed Battlefield series. Their newest project, Mirror’s Edge, aims to take the free-running and complex 3D platforming style found in games such as Prince of Persia and Assassin’s Creed, and apply it in the first-person perspective. Many have questioned the viability of such a concept, but after playing through the demo, all of those doubts can be laid to rest.

Mirror’s Edge takes place in a fictional metropolis where the governing entities keep a firm hold on the populace, enacting a strict policy of surveillance and regulation. Some citizens have herded like good little sheep, while others have chosen to rebel, thus being been cast out of the "normal" society. The game’s backstory (or what little was presented in the demo) appears to borrow themes from George Orwell’s Nineteen Eighty-Four, another tale of dystopian totalitarianism…until the gameplay kicks in. 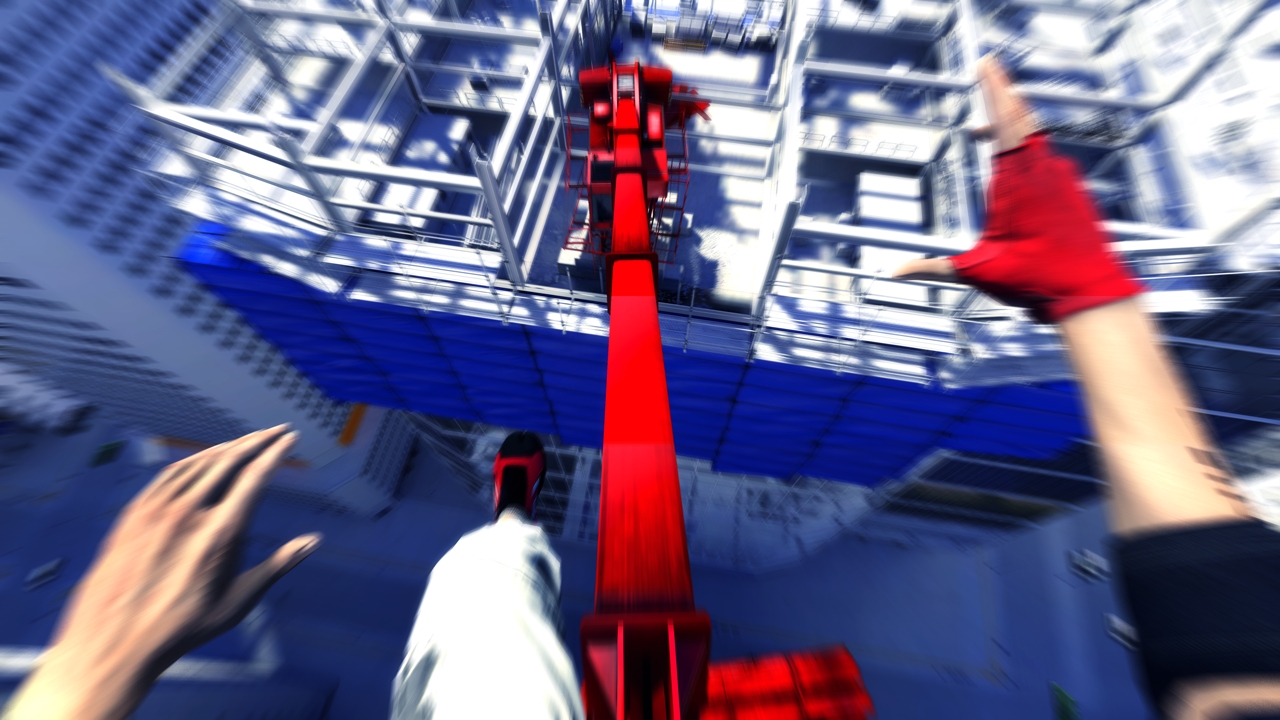 This is not your typical first-person shooter. In fact, the game’s protagonist, Faith, is encouraged to avoid conflict with government agents whenever possible. She is but a runner–a physical transmitter of messages between members of the outcast society–and cannot even hope to combat the heavy hand of the government. This feeling of helplessness and the adrenaline-pumping chases that result from enemy encounters help form a bond between players and the woman who they embody in the game.

Another difference between Mirror’s Edge and the average FPS is that players are always very aware of the physical space that Faith occupies. Her arms and legs are often visible in the HUD-less field of view as she grabs ledges, climbs structures, vaults over obstacles, and leaps from building to building. The camera, too, moves as if stuck inside of Faith’s head. As she runs, the camera bobs up and down, and all of the tumbles, slides, and swings whip the camera in whichever direction her eyes would realistically be looking at any given moment. Even so, navigating and observing the environment feels smooth and natural.

The parkour controls in Mirror’s Edge consist of the normal dual-analog movement that players have come to expect in first-person games, combined with a simple up-action and down-action setup. "Up" moves are things like jumping, climbing, vaulting, and wall-running, and "down" moves are used for crouching, sliding, releasing Faith’s grip, etc. A 360-degree turn button is included for quick direction changes and Mario-esque wall jumps, and at times when balance is a necessity, the left analog stick keeps Faith from falling to her untimely demise.

Momentum and "flow" are important in Mirror’s Edge, and as players guide Faith along the rooftop conduits of the city, they build up the capacity to slow time and increase reaction speed by hitting the X button when faced with a hostile opponent. Because she lacks the firepower to neutralize these enemies, Faith relies on her ability to disarm or temporarily disable them and keep moving. She is capable of delivering a few key strikes, including a jump kick, slide kick, and punches, but can also string these blows together with acrobatic maneuvers like wall runs and jumps. More importantly, she can quickly turn the tables on an assailant with a tap of the Y button, which will cause her to counter-attack and seize his weapon. 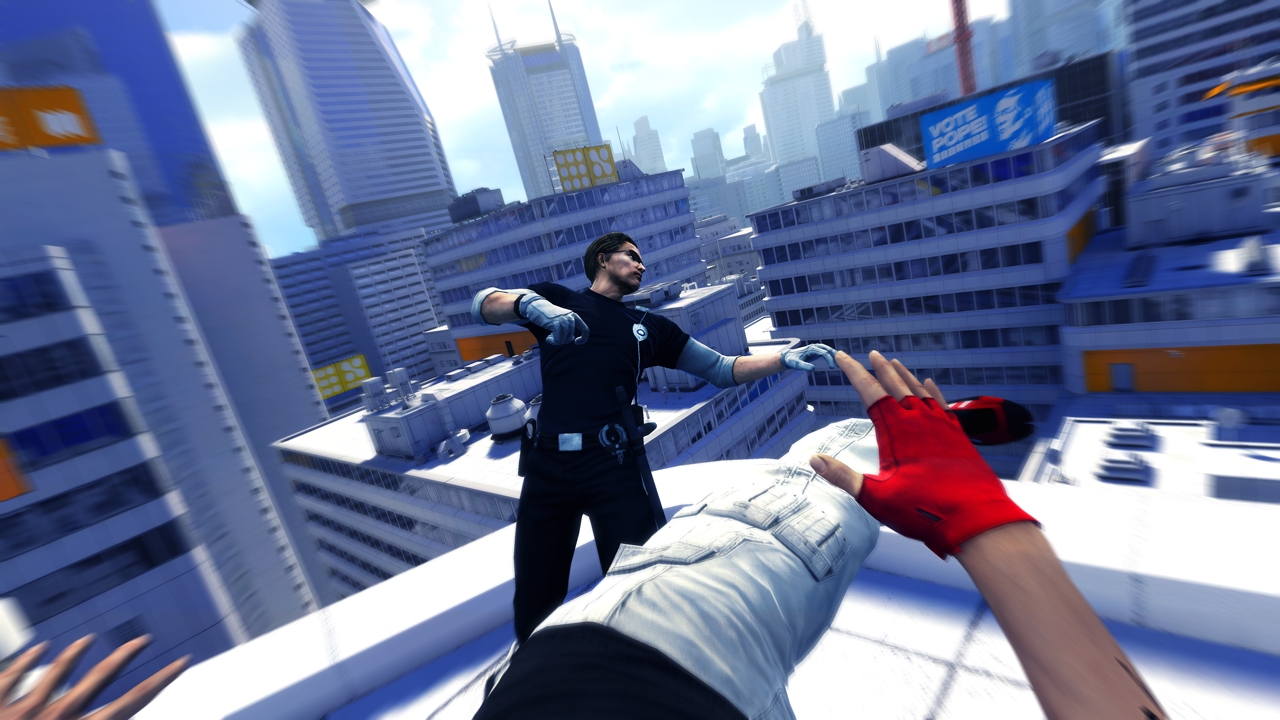 It’s not all about running away in Mirror’s Edge, as I was able to quickly disempower a couple of lightly-armored agents and embed multiple pieces of lead in them to clear a path during the demo. Other weapons in the game include heavier rifles and shotguns, but the bulkier the gun, the slower and less agile Faith becomes. Players must choose between mobility and firepower, though it will be possible to complete the entire story without ever firing a shot.

Staff Writer Joe DeLia spent some extensive time with the demo’s Time Attack mode, and has this to say:

"This mode might be just as exciting as the Story mode. Time Attack takes the game’s preset single player levels and strips away any of the story elements, leaving just the course and a ticking clock. The frantic pace of the single player is exemplified even more so here, as the clock keeps speeding upward while you attempt to time the perfect move and land your jumps with pinpoint accuracy. As if the gameplay of Mirror’s Edge wasn’t addictive enough, each level in Time Attack has full leaderboard support that also allows you to download anyone else’s Ghost replay data, letting you to see a shadow of the other player doing their run while you play out yours through the level. Using this, you can see the crazy shortcuts that they took, discover new paths that you never knew existed, and get disheartened when you see them speed off into the distance as you bungle yet another attempt at pulling a flawless maneuver. In essence, Time Attack mode takes the exciting single-player free running gameplay that has everyone excited about Mirror’s Edge and makes it into a racing game. This allows players to compete against your friends, albeit indirectly through the replay data, and show off their parkour skills on a worldwide level. Time Attack should prove to be very popular, and will be well worth diving into upon completion of the Story mode. Now, if you will excuse me…I have to shave .02 seconds off of my time."

The demo leaves me with few concerns about the game’s polish, as I was impressed with everything from the responsive and innovative gameplay to the stylish and artistic visual representation of what is meant to be a stark and unfriendly concrete jungle, to the character voices, sound effects, and score. I do wonder, however, if a game with such potential to be an expansive open-world playground will end up feeling entirely too linear as it directs players along specific paths through the city. Then again, if those paths are carefully crafted to optimize the gaming experience, then should it even matter?

Mirror’s Edge hits the Xbox 360 and PlayStation 3 on November 11th. Urban flight is one week away.