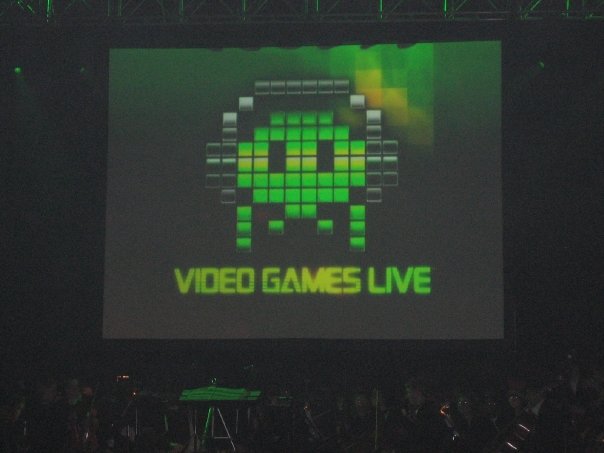 When you look at the map of the gaming universe, there probably isn’t a place as far from the traditional centers of the industry as Burlington, VT. A city of some sixty-thousand residents, smack dab in the middle of a state with less than half a million people to its name, it is probably the darkest, loneliest corner of the world when it comes to video games. That said, on the evening of January 17th, there wasn’t a better place to be a gamer than this tiny state often known only for its frigid winters and Ben and Jerry’s Ice Cream.

Vermonters had the privileged opportunity to host the first show of the Video Games Live 2009 World Tour. Gamers of all ages flocked to the Flynn Theater to watch the show and by the end of the night they had participated in one of the most extraordinary symbols of just how far video games have come in the past two decades.

“You think L.A., New York City, those are easy, but to go to a place like [Burlington, Vermont] and do a show there and sell it out, I think that says a lot.” Said Tommy Tallarico, the show’s co-creator.

Tallarico, more than a familiar face in the gaming world for his extensive work in the video game industry, conceived the show in 2002 with fellow game composer Jack Wall. Despite initial doubts from critics, the first show opened and sold out in 2005, going on to grow exponentially in the years following. “We did three shows in 2005, eleven shows in 2006, twenty-nine shows in 2007, forty-seven shows last year, we’re on sixty to seventy shows this year.” Said Tallarico.

Further demonstrating the popular power of the show, a compilation of the show’s musical segments was released last year and made it into the top 10 best-selling albums on the Billboard charts. The true sign of the show’s growing influence for the creators however, is the way it has served to help legitimize video games to a world generally critical of the medium.

“The reason we created Video Games Live is we wanted to prove to the world how culturally significant and artistic video games have become.” Said Tallarico. “We get letters after the shows from mothers writing in saying, ‘I took my son to your show last night and …I was really impressed and blown away. Thank you for helping me connect with my son and open my eyes. Now I understand, I get it.’"

Whether they are dragged there by family members, spouses, friends, or even go of their own accord, some thirty to forty percent of the audience of Video Games Live are often non-gamers. Reaching this crowd, lacking the sort of knowledge that many devoted gamers might take for granted, is one of the most important elements of the show for Tallarico.

“We wanted to create a show not just for the hardcore gamers… but for people who don’t have to know a darn thing about video games or be interested in video games to be able to follow along and be entertained.”

It is a mission that is often accomplished. Carrie Pratt, a Vermont native and self-avowed non-gamer attended the Burlington Concert. “It definitely made me appreciate the music in the games,” Pratt said. “I had never noticed it before but I think it’s really cool.”

This is an assessment that likely wouldn’t surprise Tommy Tallarico. “[Non-gamers are] the ones who are really the most surprised at the quality of the music, the amazing graphics, or the quality of the characters and storyline.” Tallarico said. “Gamers, we get it, we know how awesome the music to Final Fantasy is, and we know how amazing Blizzard’s graphics are, but for somebody who is not into that kind of thing to see that come together in a show is really surprising.”

With all the emphasis placed on progress and legitimacy, however, the creators of Video Games Live aren’t oblivious to the obstacles that video games still face in achieving the sort of acceptance other established forms of art take for granted. If video games have overcome obstacles such as the limitations of technology and the occasional immaturity of fans and designers, there is one roadblock that seems to perpetually dog gaming: the media.

“I think that video games in the mainstream media have this kind of cloud over their head. Whenever you hear about video games it’s always something negative. So-and-so politician thinks video games are offensive, or such-and-such parents’ group says video games are the cause of violence.” said Tallarico. “Even the video game media itself needs to help promote the great elements of video games to the mainstream. Not that they don’t do that, but you see sometimes a lot of video game press out there that is always like ‘Oh this sucks,’ ‘Sony sucks,’ or ‘This game sucks on the Wii.’ I think our own journalists need to actually be journalists and not just opinion givers.”

At the end of the day, however, no matter what barriers video games have to surmount, they are fun, and Video Games Live definitely achieves the status of being a blast. On January 17th in Burlington, Vermont, gamers got to relive the best moments of their favorite video games en mass, watching as their favorite games, and above all, their favorite songs were played out by the Vermont Youth Orchestra and Choir. They cheered as figures like Solid Snake, Master Chief, and of course Super Mario were brought to life by the power of music and visuals many of us know by heart. If there was nothing else to take home from that night, it was that.

“The music is just powerful whether it has video, lights, or nothing at all.” Said Tommy Tallarico. Video Games Live has brought all of that and more to a culture long since established, but starved for recognition.