The iPhone seems like a pretty nice home for the ever-popular tower defense genre, but it seems like there are only a few developers making a real effort to bring that PC experience into the palm of your hands. Then Subatomic Studios came along and released Fieldrunners, quenching the thirst of TD fanatics everywhere.

If you’re new to the tower defense genre, the idea is pretty simple; every minute or so, a wave of enemies will appear on one side of the screen, trying to infiltrate your base on the opposite side. It’s your job to line up strategically placed towers around their path in order to destroy them before reaching your base. You start the game with a small sum of money – just enough to buy a few towers – and with each enemy you defeat, you stack more cash, allowing you to build an arsenal of defensive weapons. 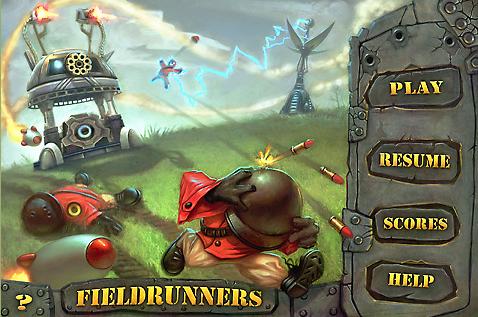 Fieldrunners is a free-roaming tower defense game, meaning the enemies aren’t on any set path, and simply have an open area to roam around in. That means it’s up to create a convoluted gauntlet of death they have to run before getting to the finish. Since each tower can be upgraded to become more devastating, you’ll have to decide whether or not it’s fiscally viable to upgrade or to purchase a new tower. The four different defense weapons include a rapid fire machine gun, a goo-shooter, a missile launcher and the ever-expensive lightning tower. Each tower has their benefits and cost-effectiveness, so you’ll have to think ahead in considering what to purchase.

The enemies vary from small soldiers that trek across the field on foot, to speedy helicopters that fly above your towers, ignoring whatever path you set for the rest of the baddies. While it seems like missiles are the best attack against choppers, everything else in the game is damage-based, meaning you’ll typically take away the same amount of HP for each enemy, instead of the damage ratio changing based on what tower is attacking which enemy. This makes Fieldrunners feel less strategic than many PC tower defense games, and leads you to playing the level the same way over and over, only improving on minor aspects.

Visually, Fieldrunners fits perfectly on the iPhone screen. The individual character art, the two different maps, and the menus look great and never have you squinting at the screen. Even the classic multitouch pinch commands let you zoom in on the action. (I’m personally partial to zooming in while a battle is raging, and shaking the screen back and forth to give it that authentic Saving Private Ryan feel.) Even the audio is impressive. The sound effects give this cartoony title far more immersion and helps showcases the numerous little details the developer put into it. While there’s no in-game music, you can feel free to crank up your own tunes to listen to. (John Williams soundtracks are suggested.) 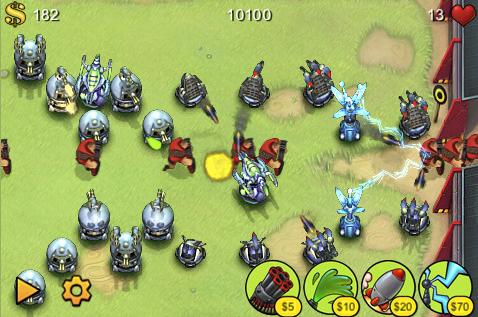 Like most other iPhone games, exiting by pressing the Home button will save your game right where you are, so it’s perfect for pick-up-and-play action. Fieldrunners may not be the deepest TD game, but at a small pricetag of just a few dollars, it’s certainly worth a purchase for those jonesing to beat down a wave of baddies. If you’re into this genre, you’ll certainly get some good playtime out of this little nugget of violence.