A common plight among iPhone developers is how to emulate standard gaming controls on the touch-based device. In theory, virtual buttons and analog sticks should get the job done, and yet somehow, many games fail to allow for precise control. iDracula, a free-roam, 360-degree shoot ’em up, revolves entirely around maneuvering using virtual analogs, much like the Geometry Wars series. And somehow, it ends up feeling just right.

The premise is simple (yet completely unexplained); you’re a guy with a gun, and everything within a 7 mile radius apparently needs you dead. Using one thumb to move and the other to shoot, you frantically try and escape the waves of enemies while blasting them to bits. There are only two modes, Survival and Rush. Rush is a straightforward slaughter-fest that gives you a minigun with unlimited ammo with the goal of taking down as many baddies as possible. Survival mode, however, is where some depth can be found, allowing you to pick up a slew of various weapons, regain lost health and even gain game-altering “perks.” 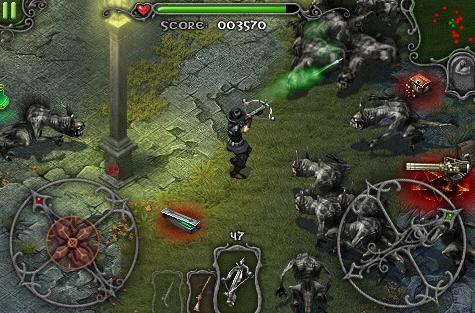 The perk system is pretty interesting, as it allows you to choose from a small selection of long-term powerups. Choosing Telekinesis magically drags items on the playing field closer to you as you run past, while Power Striker gives your guns more knockback power against foes. My personal favorite is the Immortality bonus, which grants you invulnerability for a solid 20 seconds, but at the cost of your life. It’s a really fun last-ditch effort that lets you go out like a hero.

Being titled “iDracula,” there’s a definite vampiric-horror aspect to the visuals. The game features some high-detailed sprites with pretty fluid animation, not unlike what you might have seen in a 16-bit Castlevania game. Since the game is given a top-down perspective, the camera suffers from a 2D GTA-like syndrome, disallowing you to see what’s not immediately in front of you. Luckily, there’s a small blip map in the top right of the screen, indicating the positions of all the enemies around you.

iDracula combines the perfect level of generic arcade shooting with wicked powerups and a steadily increasing difficulty level to provide a truly addictive experience. The controls work so well you’ll forget you’re playing on an iPhone. Even though there’s not a lot of depth in the long-run, it’s easy to get lost for a solid 15 minutes whenever you feel like mowing down hordes of monsters.