In an endless sea of apps, the App Store is bound to have a few categories with copy and pasted games. Naturally, the first classics to hit the iPhone were common board games, such as checkers, backgammon, chess and more. It certainly seems like more incarnations of these popular turn-based titles are popping up each day, and most offer little more than their competitors. Publisher 99Games has delivered yet another iPhone Chess adaptation in an attempt to grab some of that App Store fat cash.

Chess Pro certainly delivers in the most pure and essential aspect; it’s a solid game of chess. While I’m not a chess pro, myself, I’ve been known to knock around a few queens in my day, and it’s clear that 99Games produced a beefy and intellectual chess experience. There are three levels of difficulty, and even the easiest is challenging for a beginner. On top of that are three included AI variants: normal, suicide, and losers, which all incorporate a different play style when facing the computer. 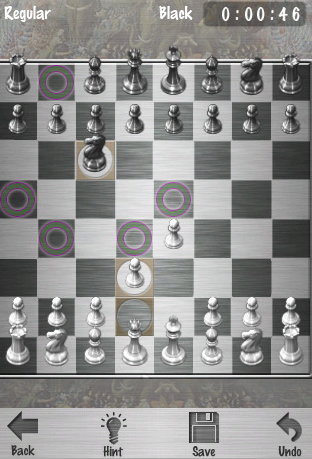 Even though Chess Pro supports an on-screen two-player mode, it would have been fantastic to have the option of playing others online. It’s really difficult to get people to sit around your iPhone for a game of anything, let alone a potentially long game of chess. And while it’s a fine format for playing someone on a car trip, what backseat kid is going to want to embrace such an intricate game when SpongeBob is playing on the portable DVD player?

An aspect that really shines in Chess Pro would be its smooth control. Clearly there’s nothing difficult about getting board game controls right, but developer Robosoft added a few perks that really enhance the portable experience. Moving a piece is as simple as sliding your finger from one position to another, but in a favorable effort to expedite the process, hovering your fingertip over the each piece shows you all of the available legal moves you can make. There’s even a “hint” button that shows you what a good computer would choose next. Personally, I think it’s a bit cheap considering there’s no penalty for using it, and you can get an infinite number of hints in each game. Of course, playing through a few games like this would certainly teach a beginner some smart moves.

Unfortunately there’s really not much to look at, though. The advertised “3D themes” are nothing more than 3D-ish sprites on a 2D board, similar to just about every other virtual chess game you’ve ever played. Now, I’m not complaining, because frankly a true 3D board with pieces would probably be less intuitive to control, and potentially more cluttered to look at. It’s honestly a bit bland, but then again, chess isn’t the most exciting of games to begin with. 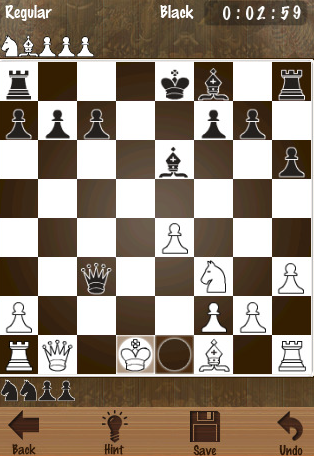 Chess Pro is a solid handheld chess experience with the main focus on the purity of the game. Some genuinely nice features, such as multiple gamesave slots, automatic resuming, and infinite undo, are really appreciated. Again, the ability to play over an internet connection would have been clutch, but luckily the AI is smart enough to give you some serious competition. At $3.99, there are definitely cheaper alternatives on the App Store, but it might be difficult to find a game of chess quite as polished.