Rare does it once again. Presenting us with a memorable game, original characters, and a fun experience for the whole family. Kameo is fairy princess embodied with the elemental sprites of her race, called Elemental Warriors. Each warrior will aid her in her quest to save the elves and all the innocent inhabitants of the Kingdom. From fire to ice, there is a warrior for each element. Guardians of their realms, and honored as demi-gods, now is the time for them to fight and save the Kingdom from the Troll Lord Thorn once again, else all magic will be scourged by the machines and fires of the brutish warriors. Rare presents a classic tale, nay tragedy of a fantasy world, and the epic heroes who fought with fists and magic to save it. The story of betrayal, loss, redemption, love and above all the faith and courage tied to everyone’s destiny, in a forgotten time, in a forgotten land, but a legend we’ll always remember.

Players begin with the ascent to the throne room, as trolls ravish the Kingdom. With a very basic control scheme Kameo will metaphase into the Elemental Warriors. 3 Warriors are tied to the A/Y/B buttons, simply press the bottom which corresponds to the Warrior you need. A, drops you back to Kameo. The game over all develops as a hack and slash/action game; using the bumpers and triggers you can pull off several combinations of attacks. Many of these attacks will allow you to reach new location, or move to locations which would otherwise be blocked off.  Boss levels are even presented with co-op options in which you can team up with a friend and use you’re Warriors in team based attacks to achieve better rankings on each level. The presentation is an easy concept to master, designed for child understanding but not degrading game play to a conceptional insult.

Graphics are purely amazing for this game. The fantasy world is developed in lavish detail, exotic plants, oyster shell sands, magma erupting volcanoes, aliened creatures, and unbelievable architecture. Detailed Furby-like fairies, plant-like farmers, and legions of fierce, slaughtering Trolls. The graphics will never cease to impress as you travel through this Kingdom of eye catching sites and creatures. The cartoon world is just a reminder of how unbelievable the imagination, the fabrication of fantasy really is, and it’s never been more real that what Rare has accomplished with Kameo. The polished environments, give the visual a sharp clean edge to their design, emphasizing on ice, metal, snow, fire, grass and water. Each level uniquely developed and created for its location, rarely seen in other regions of the game, making each level recognizable and distinct. Overall the graphics are of the typical style we’ve come to experience with Rare, relating to games such as the Banjo series, Conker, and Viva Pinata. The cinematics are not pre-renders, and use the same engine as the in game play allows. The videos of course are made to better detail, but the transaction from game play to cut-scene is smooth without deterioration. Inevitably this does not make gamers question why a cut scene is so much better looking than the actual game play as often becomes the case in most typical action or RPG games.

The games sound isn’t the most amazing. You have typical sound effects, from storms, water, elements, personal attacks and army battles. These sounds are rather underdeveloped or over used, not much emphasis on them, and they don stand out much. However the voice acting, character speech/statements, and music is done amazingly well for the game. Each zone you go to, and each level you play on will have a tune or beat playing in the background which fits each level as they should. Example, when you are in the Badlands, maybe not even near the raging battle of Trolls, you can hear the drums, and fast paced beat that tells you there’s a lot of action of danger in this area. Then you move into the waterfalls and the music is much more serene and mellow, fitting to the calm paradise you are roaming around in. The actors for all main characters where well selected and fit their characters very well. However I would comment that Kameo’s aunts and uncles could have had much better lines, some of the dialog they do voice, just don’t fit the image you have of the character, or to explain it better, the voices seem out of character at some points after rescuing them. Each Elemental Warrior also makes a distinct sound of movement, of an occasional outcry, both of which are well developed to the characters design and appearance. Overall while there are some noticeably poor applications to sound FX, the job was still done great, and is appropriate to the games setting. 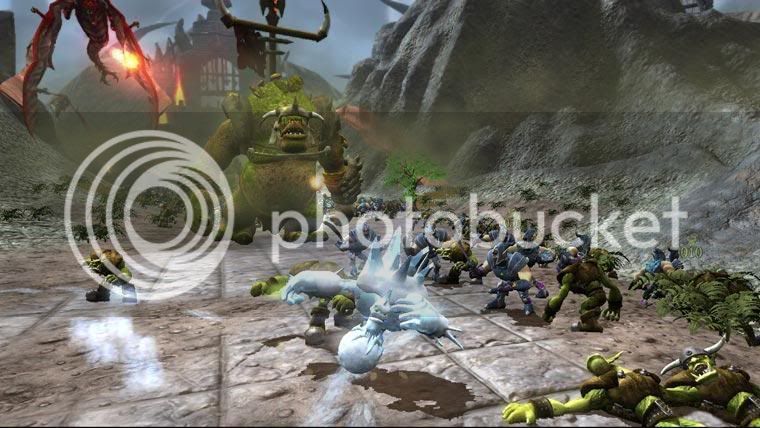 Send in the trolls.
Game play is very addicting, and length. Over all there’s about 9-14 hours of game play. It really depends on difficulty, how much trouble the gamer has adapting to each Elementals control scheme, if you are looking for all the bonus items, if you are going back for co-op missions, and if you are trying to achieve an A ranking on each level. A ranking are rather difficult. As you fight you eventually build up a “carnage” meter. Once you are in carnage mode, you move about in bullet time, taking on dozens of enemies with no effort and boosting your points on the level with each carnage attack. To play a co-op level which is really the boss mission, you must first beat the mission in single player before you may jump into co-op. There are a total of ten Elemental Warriors; two fire types, two plants types, two water types, two rock types, and two ice types. Each with a variety of skills and attacks which are required to progress your through missions. The campaign is truly epic, and leaves you eagerly awaiting a sequel. Like most action games Kameo lacks a multiplayer, which makes sense as this game is all campaign. However the co-op mode does not degrade nor ruin the story any with two Kameos moving about. Mostly that’s because you’ve already played through once, so the co-op help keeps it more interesting the next time through. Rare has released outfit themes for characters, and more achievements to pro long game play activity as well.

Replay value is stronger in this game than you’d first think. You can easily miss a lot your first time through the game, or you will have to come back after unlocking a new elemental to reach points in the game earlier unachievable. Co-op also helped pro-long replay value for the game, more so after Rare opened the co-op to online gamers as well. Collecting all the fruits, Orbs, and Either’s also takes a lot of time away from the story, roaming about on side missions to finish the game 100% and unlock further achievements. Overall replay value is essential to this game, and is still enjoyable so it does not become repetitive over time as most multiplayer games will. However once the games 100% complete, and all achievements cleared…well then there really is nothing more to do, unless you feel like starting the game a new. And if you’ve done a 100% unlocking all achievements, a whole new games doesn’t usually sound as enjoyable as completing it before was.

Overall Kameo is another success for Rare. This is one title that will be as memorable as their other series, recent and upcoming games. Grade A graphics, story, and game play. Most of all the game is really open to and fun for gamers of all ages, so don’t be shy about being 38 years old and enjoying a game like this. Rare has had Kameo planned since the N64 but the project was never really pushed into development until MS acquire Rare ware, and then jumped their first party developers onto the 360 bandwagon. Rare although a bit unsteady with some of its Microsoft titles such as Grabbed by the Ghoulies, and PDZ has begun to make a familiar mark with titles such as Conker: Live and Reloaded, Kameo, Viva Piñata, and upcoming Banjo-Kazooie 3. There has not yet been any confirmation on a Kameo 2. However as is the case with most Rare titles, one is eagerly expected.“