Economy is a vital component of many games; ranging from from picking up new ammo and weapons to buying items in bulk to pad your own pocket. Even in games where there is no financial market, such as Fallout 3, good and services can be exchanged with those magical bottle caps. Money doesn’t just make the real world go round, it makes the virtual one go round as well. That’s the idea behind Hermitworks Entertainment’s Ipod Touch title, Space Trader: Moon Madness. 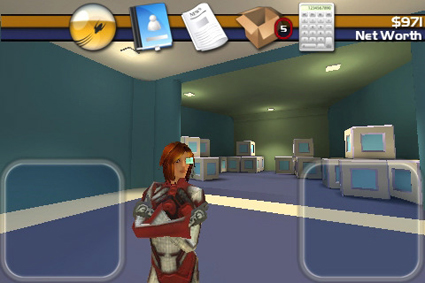 Space Trader is all about level one economics; buy low, sell high. Tips about shifts in the market come from reading the news, bribing bartenders, or picking up tips from scurrying denizens of the intergalactic underworld. That’s one thing about Space Trader; it doesn’t make any excuses. If you want to make a bundle delivering genome resequencers to a mad scientist, then you can do that consequence-free. You can also deliver suspicious goods and rat out your supplier to the law. The game may as well be Ferengi 101, profitability is far more important than morality. 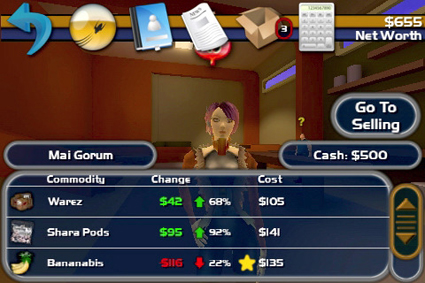 As the title implies, the game is so simple it’s madness. Five buttons at the top of the game screen allow players to navigate. The first shows a navigational map for the game’s three locations, the second brings up your list of contacts, the third describes news items and missions, the fourth shows your cargo, and the last allows you to deposit or borrow money from the bank. Oddly enough, while once you deposit money you can’t take it out again; you are only allowed to borrow it. I guess we’re all really just borrowing our money in the end anyway.

The game’s objective is to make as much money as you can within the time limit – about 114 days. This time limit may sound generous, but it can be quickly whittled down with travel time. Going from Earth to the Moon takes 25 days, but only took the Apollo rockets three – perhaps all that contraband cargo is slowing the in-game ships down. All the time spent traveling dramatically shortens the game. Once your time is up the game does offer the chance to keep playing, but you can’t travel anywhere because you’ve used up your allotted days. I always get into the groove just as the game stops. 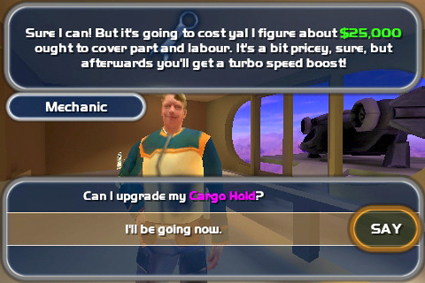 Controls in Space Trader are simple, with movement and camera controlled by two squares at the lower left and right side of the Ipod’s screen. It takes coordination, but the system works well if your left hand knows what the right is doing. Selecting items is simply done by centering the object or person and tapping. Sometimes characters require more than one tap to illicit a response and moving in front of a person in the first place isn’t the easiest. The system can work, it just takes some effort.

Visuals are solid but drab, with the game’s palette composed of teal, sky blue, and dark red. Not every environment is the same, but Space Trader lacks vibrancy for a game about rough and tumble space trading. The Earth, Moon, and Colony are empty; you’ll never see more than 7 individuals in any area, and they are often color swaps of the same models. The Ipod is capable of much more than these muted and sterile graphics. 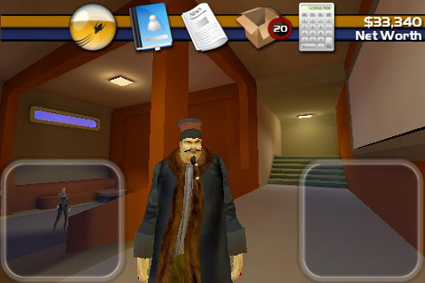 Space Trader’s audio is one of its weakest points, because there isn’t any. The opening intro, while being a nice piece of animation, is diminished by a complete lack of music. This silence continues in the game. On full volume I can barely hear my character’s footsteps, a two story fall results in a muffled thump, and I’ve just described 90% of the game’s sound effects.

Space Trader isn’t a bad game, but drab environments and short game play sessions unnecessarily limit the game. Here’s hoping that other platforms are more kind to the game.