Gas Powered Games never sugar-coated Demigod’s inspiration, clearly stating their enjoyment of Warcraft III customization Defense of the Ancients (DotA). For those unaware of DotA, it is a modification in which the players select a hero to lay waste to opposing heroes and lackies. During the course of play, character skills can be bought with gold earned from combat. Like many players, GPG enjoyed the game but felt it could be modernized. Unlike many gamers, these folks were game designers, and could see two aspects of the title holding it back: the severely dated Warcraft III engine and the high learning curve. Gas Powered Games created Demigod to address these issues. 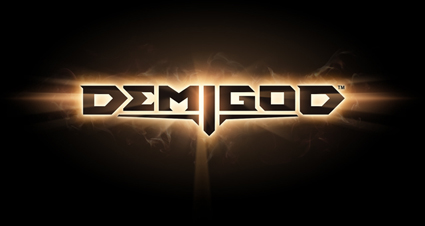 Technology implementation is a strong point for Gas Powered as evidenced by their previous title, Supreme Commander. Demigod upholds this by looking and sounding brilliant. Traditionally, RTS games are visually limited by so many units being on the screen at once. While Demigod still has numerous units on screen at any given moment, the game’s models, spell effects, and level designs are gorgeous even at medium settings. If your computer is beefy enough to suck as much power as some complete households, the title’s graphics will astound you. Audio in video games can be overlooked, but Demigod’s clashes make it necessary due to the chaos of battle. Learning the sound of spells and abilities will cue players when to pounce or retreat. The standard soundtrack is stellar to boot.

Demigod is meant to be played online or at a LAN. The game comes down to selecting a hero and then leveling him up through experience and purchasable items. Equipment is purchased with gold – earned from killing the other team’s buildings, cannon fodder, and giant paydays from dominating an opposing hero. The competitive nature of such a title would imply the existence of a tutorial, something to educate and train players. However, GPG didn’t include any tutorial in the game, leaving those without DotA experience with a large learning curve. Even still, experienced DotA players could have gained useful information from a tutorial. After all, Demigod may be inspired by DotA, but it’s not the same game.

More than just technical updates set Demigod apart from its inspiration. First off, the eight demigods each have complex descriptions and backstory. All this effort in back story makes the abscence of a tutorial even more quizzical. Allowing players to experience some of this story would not only make the game’s setting more intimate, but also provide a scenario for new players to learn new spells.

Demigod’s most obvious divergence is in controls. The designers saw the opportunity to create a control scheme based around a single unit (and its possible minions) with their custom engine. However, the inability to customize certain aspects of the scheme – such as the "Select Demigod" and "Select All Units" buttons – will annoy most gamers. Demigod also disposes with weapon combination, instead opting for a more direct and simplified progression through equipment. Players can also upgrade their structures and minions with excess money.

Demigod also offers a parade of additional modes and customizable options beyond Defense of the Ancients. These modes, options, and internet rankings open up far more replayability for players. Perhaps you don’t have any friends, or less depressingly, do you just want to test a new build? Just hit up the single player skirmish and select your bots. If dominating AI doesn’t stroke your ego properly, head into the Pantheon for ranked matches and tournaments.

Unfortunately, all of the multiplayer modes have been rendered nearly unplayable. Stardock is well known for their stance on piracy; believing that if a company supports their game past release, gamers will reward them by becoming customers and long-standing members of their community. Stardock does not include any intrusive DRM, relying solely on Impulse (their digital delivery software). Demigod us a multiplayer-focused title, which works fine on smal scales. However, since Gamespot broke the release date, over 100,000 illegitimate players have flooded their servers. This, coupled with a less then stellar multiplayer UI , has made the title’s multiplayer nearly unplayable for over a week. Stardock and Gas Powered Games have released daily patches and updates since release, but the problems have only partially improved.

Demigod’s gameplay is tried and true, offered from a pair of companies that have pledged long-standing support. Unfortunately, games cannot be reviewed based on potential or promise. As noted, the patches have helped the game-breaking multiplayer connection issues, but they are still present. Judging from the beta, single player since launch, and a handful of multiplayer games I’ve managed to complete, [/i]Demigod[i] is enjoyable. A gamer’s purchase will hinge on three things: confidence in Stardock and GPG to fix the issues, constant additions to the Demigod roster and item shop to keep things fresh, and $40 on a multiplayer-focused title.