David Sobolov is a voice actor who transitioned from work in cartoons to providing voice acting for the video game industry. He’s starred in blockbuster games like Call of Duty 4, Everquest II, Diablo III, Halo Wars (in which he played the Arbiter), Brutal Legend and 50 Cent: Bulletproof, and was described by John Lippman of the Wall Street Journal as "one of the video game industry’s top voiceover artists". Nick McCavitt got the chance to speak with David about becoming involved with the video game industry, his new "evil" iPhone project, and how wannabe voice artists can follow in his footsteps.

TGR: What was it that made you want to get into the video game industry?

I wish I had a cool story for you about a specific event that made me want to start working in video games, but the truth is that I started doing them as soon as they started offering them to me! When I recorded voices for my first game in 1998, they had just started putting a significant amount of voice in games. As the tech has improved, so have the work opportunities.

TGR: Tell us a little about your early experiences in the industry.

My first game was called Homeworld. Having the technical ability to make use of hours of dialogue and game play voices was so new that they hadn’t really set up a system to record voices like they have now. My Voice Director was the Art Director who – bless his heart – really didn’t have any voice directing experience. I got the sense they didn’t do a lot of planning beforehand to decide in advance where they wanted the storyline to go or what kind of characterizations they wanted so the sessions were endless… but fun. None of us really understood at the time that you can’t sit there for seven or eight hours doing intense voice work if you want good performances. Four hours is really the max before the actor is just too exhausted to give the project 100%. I remember doing one seven hour session, after which they pretty much poured me into a cab. When I got home I slept thirteen hours straight! That entire session was thrown out a few weeks later because they changed the concept of what kind of person they wanted the character to be. Homeworld was a wild ride but I’m glad I did it.

One of David’s most notable roles was as the Arbiter in Halo Wars.

TGR:  How do you think the industry has changed between the time you started and how it is today?

It’s matured a lot. Early on all the games (the ones with lots of voice in them anyway) seemed to be about screaming and dying. There’s still an element of that, but games are much more cinematic. My character in Rogue Galaxy for instance had a drinking problem, needed to redeem himself from being a ‘washed up’ soldier, and was in love with a female bartender. That gave me a lot more opportunity to ‘play’ than the games where my guy is just running around shooting at stuff. Sure, those can be fun too (especially when they get you to record fifteen different ways to die), but I get a lot of enjoyment out of being able to create a role with some substance to it.

TGR: Of all the games you’ve been in, which one has been your favorite?

I think Halo Wars is starting to become one of my faves, because the Arbiter had such a ‘delicious’ brand of evil. That’s always fun. The fact he was a religious zealot was entertaining too.

TGR: What games are you currently playing?

You may be surprised to learn that although I’ve performed roles in over 40 video games, I don’t actively play video games. I guess I spend a lot of my time involved in the business of working in the industry and I don’t find myself with a huge amount of free time… and that time I end up spending doing very 20th century kind of stuff with family and friends.

TGR: Can you tell us something about your current and future projects?

I’m definitely looking forward to seeing the reaction to a few games I’ve been working on this year, especially Brutal Legend. I hope you’re aware of one very exciting project I’m in called iMEvil… it’s a selection of 32 of my most ‘evil’ phrases conveniently packaged in an iPhone (and iPod Touch) soundboard. If fans of my work want to carry around a little bit of the Sobolov brand of evil with them all the time, iMEvil is the app to buy! 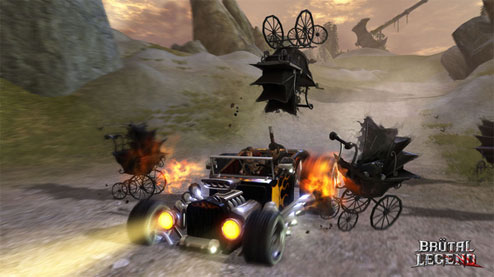 David will be starring alongside Jack Black in the upcoming Brutal Legend.

TGR: Do you have any advice for our readers who might want to become video game voice actors themselves?

At the end of the day it isn’t really about ‘doing’ voices… it’s about acting ability, especially as games evolve into complex worlds with multi-layered characters. The first step is to do community theater, perhaps take an improve class (because in video game voice acting you never know what’s going to be thrown at you next and you often have zero prep time)… and even take acting lessons. Most of the well-paying voice roles in games are recorded in either New York or Los Angeles (and to a lesser extent San Francisco and around Austin, TX) so you pretty much have to live in one of those cities if you want to work in the industry. Then you have to make a demo of your character work (definitely find someone currently working in the business to help you with that) and get it to a voice agent – the person the developers and publishers generally talk to if they’re looking for game talent.

TGR: Any final comments for our readers?

Have fun and don’t let anyone squish your dreams.