High Voltage Software unveiled its Wii-exclusive first person shooter (FPS), The Conduit, to the eager gaming public more than a year ago. Nintendo fans saw the game as a surprising, yet welcome, departure from the Wii’s library of casual games. Furthermore, the lack of exclusive quality shooters for the Wii have starved owners since Metroid Prime 3: Corruption back in 2007. It goes without saying that The Conduit has high expectations to meet. Now that it has finally arrived on store shelves, will High Voltage’s alien blast-fest live up to the hype?

The Conduit puts the player in control of Michael Ford, a Secret Service agent working for a clandestine organization called The Trust. The group tasks Ford with locating the mysterious terrorist named Prometheus. Over the course of the investigation, Ford discovers that Prometheus may be in league with the Drudge, an alien race bent on world domination. Naturally, he must stop the creatures from conquering Washington D.C. while simultaneously ascertaining The Trust’s shadowy motives. As with BioShock and the Thief series, the story is told through audio messages, radio broadcasts, and mission briefings.

Overall, the game’s X-Files-inspired story is convoluted, unoriginal, and anti-climatic. The plot includes twists and betrayals that players will see coming miles away. What’s worse, the tale ends just as it’s getting interesting. The abrupt ending feels like an attempt to lay the groundwork for possible sequels. Unlike the original Half Life, the lack of answers is frustratingly unfulfilling rather than mysteriously compelling. 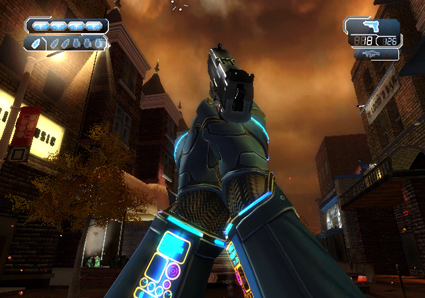 The game’s nine missions feature varied locales including the war-torn streets of Washington D.C. and the White House. Unfortunately each mission is a textbook example of linearity. The objective is always for the player to simply kill his or her way to the level’s end. This narrow focus is acceptable in games like Duke Nukem 3D and Serious Sam, but The Conduit lacks the chainsaw-wielding charm to emulate these successes. The few puzzles that exist to break up the carnage feel like unnecessary and obligatory busywork. The game features no vehicles, weapon upgrades, or anything except repetitious and boring run-and-gun action.

Fortunately the action, while monotonous, is challenging. The game gradually notches up the difficulty on the player, culminating into two particularly tough final missions. Inconsistent A.I. saps some of the challenge, however. Some foes effectively use cover while others have an inexplicable suicidal desire to stand in the line of fire. These enemies fall into two categories – Half Life style commandos and alien rejects from the Halo and Gears of War series. The game’s lack of boss battles is most disappointing of all. 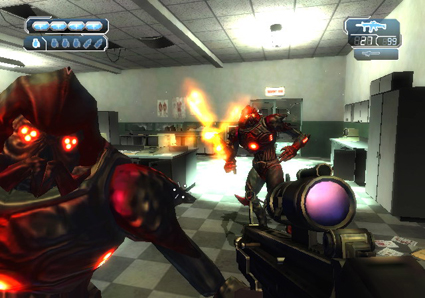 The game’s arsenal is not innovative either. Most of the weapons seem familiar. Typical shotguns and pistols are present in addition to alien weaponry that seems reminiscent of the guns from any Turok game. The most interesting item in Ford’s possession is the All Seeing Eye (ASE). The player can use this spherical alien artifact to scan and reveal invisible objects/enemies, hack terminals, and discover secret passages. The game will usually notify the player through a series of beeps if the ASE is near something it can interact with. It’s an interesting idea, and the ASE even plays a bit into the story (although it’s never clear why it’s important). Ultimately, however, the device feels unnecessary and leaves one wishing it had more functions and depth.

The Conduit’s controls are near perfect. As with Metroid Prime 3, the player uses the nunchuck’s analog stick to move and the Wii remote to turn and look up and down. The B button shoots Ford’s selected weapon while the A button makes him jump. Thrusting the Wii remote forward will cause Ford to unleash a melee attack. This is extremely useful when fighting in close quarters or defeating minor foes that aren’t worth the ammo. Additionally, pressing up on the D-pad makes Ford spin around 180 degrees – a welcome feature that saves time when the player is being attacked from behind. The game gives players a great degree of control customization – from sensitivity to button layout – which means that even the most finicky of players will be able to find a system that works for them. The only real issue with the controls is that grenade throwing – accomplished by flicking the nunchuck forward – feels imprecise.

The Conduit looks great for a Wii title. While it expectantly pales in comparison to recent Xbox 360 and Playstation 3 games, its graphics are at least as good as those featured in Metroid Prime 3. That being said, Metroid’s visuals may still be preferable since it features better art direction and more epic environments. Still, The Conduit accomplishes the gritty, post-apocalyptic look its designers intended (while running at a smooth framerate). 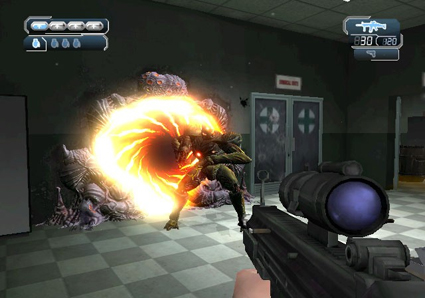 Comprehensive multiplayer options save The Conduit from its lackluster single player. Multiplayer is divided into three modes – Free for All, Team Reaper, and Team Objective. The first two modes are variations of traditional deathmatch in which players must kill as many of their opponents as possible. The only major difference is that, as the name suggests, Team Reaper divides players into two teams. Meanwhile Team Objective is a variation on capture the flag in which the goal is to capture the rival team’s ASE. In the game lobby, players can further customize the matches by voting on a series of detailed options. These options include the map, the type of weapons, and the structure of the match. For example, players can vote to play with a time limit (whoever has the most points or kills at the end of the time wins) or with a limited number of lives (last man standing wins).

The game uses friend codes, but it’s just as easy to search for regional and worldwide players. Matches are generally fast-paced with little slowdown. The only issue for some will be the inability to communicate with other players. The game does support Wii Speak but, as recent online experiences suggest, very few players have or use the microphone. Overall, The Conduit’s multiplayer options are what Wii fans have been craving from an FPS title. While the multiplayer is not on par with that of Halo 3 or Left 4 Dead, it nevertheless makes up for the single player’s deficiencies and pushes the title toward “must-have” territory.