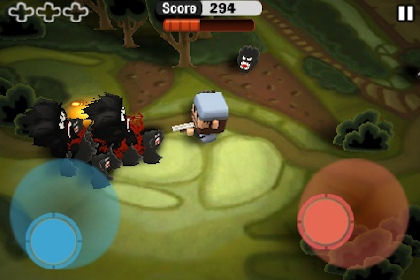 Shooters have become a mainstay in gaming today. Whether first person or third person, these games often provide us with a challenge that is simple in theory but difficult in practice; shoot them before they shoot you. Many gaming legends have been born out of this genre, especially those from the early days of gaming like Doom, Castle Wolfestein, and Half Life. Yes, the shooter game is alive and well, and is ever changing on both consoles and PCs. However, one area that the shooter has not yet fully accustomed itself to is the iPod Touch/iPhone. Developer Chillingo is helping to change that with Minigore, a 3rd person shooter designed to bring the joys of indiscriminate violence right to your pocket.

The story of Minigore is much simpler than many other shooter games out there. You play one John Gore, a man who is beset on all sides by ravenous furry creatures of varying sizes. You must navigate Gore using the touch screen controls to blast away as many creatures as you can before our hero is trounced upon. I’ve seen this quite a few times when playing the preview build, and it is far from pretty.

Minigore is simple, but that’s what makes it so addictive. You have two controls, one on each side of the screen. One controls which way Gore is moving, while the other fires his gun and allows you to aim in any direction you want. The controls may take some getting used for some players, but you will get into the swing of mowing down those furries in no time. 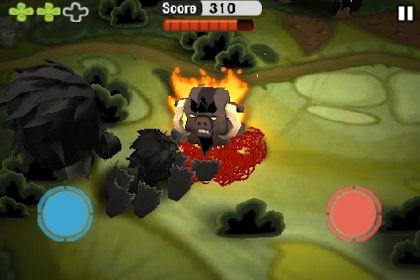 In addition to the weaponry, you’ll eventually discover powerups of various kinds to help you destroy countless monsters. These include a shotgun that can take out large numbers of enemies, but will expire after a certain number of rounds have been expended. There are also powerups that can turn Gore into a huge bull that can run over creatures, squashing them underneath his mighty cloven hooves.

While Minigore is still being developed, it looks like another enjoyable title from Chillingo is on its way. Simple yet involving gameplay, easy to grasp controls, and a plot that doesn’t take itself too seriously making Minigore something that all iPod-owning shooter fans should be looking forward to.