Inside the Games returns, bringing you an interivew with Gearbox Software founder and CEO Randy Pitchford. Randy tells TGR’s Lawrence Sonntag all about how he got into the industry, his love of magic, working on the Duke Nukem series, and even a bit of American Idol.

TheGameReviews: So Randy, tell us about your lineage and history. From your education to where you are now – how did you get there?

Randy Pitchford: It’s kind of weird you know, back when I got in the industry… today there’s schools, you can get a master’s degree in video game making today. Back when I got involved it was all new. I first started making games as an amateur. My father was in military intelligence with the government. He used to build computers and communications equipment for different government agencies, so we always had stuff flying around the house. I learned how to program in BASIC.

Randy: My first computer that I learned to program on was a CP/M-based system that my dad put together and wrote the BIOS for. It was pretty awesome, a total homebrew job. It was cool – I got to learn a lot even before DOS. It was always a hobby, you know? I went to college down in Los Angeles, taking classes at UCLA, and I paid my way through college as a professional magician.

Randy: Yeah, I used to work the Magic Castle in Hollywood and did a nightclub called Wizardz which was on the Universal City Walk. It no longer exists, but back then it was really cool. That was a lot of fun, I really enjoyed entertaining people. I did some other things along those lines – I was a tour guide at Universal Studios for a while too. But I was going to school, studying law. And my wife, who was my girlfriend at the time, helped me realize that what I was doing with all my free time at home was what I was doing as a kid, taking computers and programming them and creating games or entertainment using software. She said, “Hey, what are you doing this law thing for? Clearly you should do what you’re built to do, which is entertain people and play with computers.” That was enlightening. That wasn’t a one day kind of thing; that was like grinding on me over the course of a year or two. I finally figured it out and decided to look around. It never occurred to me back then – and this is the early 90s… even though I was buying them, [it seemed like] games were something that someone else did. Like there was a chocolate factory somewhere with Oompa Loompas in it and games came out. But I looked in to it and sent some of my work to some people. Very quickly I started getting some interest and some offers. I got offered a job at LucasArts and at 3D Realms in Dallas. LucasArts was trying to build a first-person shooter.

TGR: Was that Dark Forces?

Randy: Yeah, Dark Forces. And 3D Realms was trying to build Duke Nukem 3D. I was intrigued by the pitch that Scott [Miller] and George [Broussard] gave me. They were sharing profit with the talent. It wasn’t Lucas himself – I never met the man – but the attitude [at LucasArts] was that you should be lucky that you’re working on Star Wars. You should pay us. That was just the vibe I felt back then, it was kind of weird. But I was able to join 3D Realms and help them with the Duke Nukem thing, and it was a lot of fun. I learned pretty quickly that I was capable. There was no mystery to it. The things we were doing as armatures, the things I was involved with in my circles were as good as what was happening in professional circles. It really changed my confidence level. Going back to the magician thing: when I was growing up I was always interested in that, smoke and mirrors, creating entertainment, creating an illusion, creating something that isn’t real. When I went down to Los Angeles – that’s where the Magic Castle is – I was in awe. The Magic Castle was the academy of magical arts and sciences – it’s the Mecca of magic. I was just some kid from some small town.

TGR: Got off the bus with a sparkle in your eye?

Randy: Yeah! It’s a club for adults, so you have to be 21, and I had just turned 21 so I tried to get in. To become a magician member of the Magic Castle, you have to be recommended by two other magician members, and do an audition and pass. I joined one of the local magic clubs called the International Brotherhood of Magicians and befriended a few of the folks, and I found a couple that were members that were happy to endorse me, so I was able to get my audition. They do auditions once a month, so twelve sessions a year. There were seven people auditioning at the same time that I was. We each took turns and had to wait – like we weren’t able to watch what was going on – so we were waiting in this other room and they’d call us in one at a time. When it was my turn, there’s these nine old men with their arms crossed with evil looks on their faces, judging. I was like, “Aw crap, this is the worst experience ever.” I did my act, and then they made us wait again. Then they called us back one at a time privately to tell us what the verdict was. I was the last one, so they’d call the first guy back and he’d come out like he was just destroyed – he didn’t get in. Then the second guy – everybody, they were denying every single person. I was like, “I have no chance, this is stupid. Why bother doing this?” I went in there when they called me in and they said ’you’re in’ and on top of that they said ’we’d like to book you’. That was pretty cool, right? I had no idea where I actually stood, but that experience changed my understanding of where I stood in the magic world. I had a similar experience with video games. When I came out to Texas I was expecting this mystical process where supercomputers and dudes in lab coats – y’know, biggest brains in the world – then I get there and “Wow, this computer is really no different than my computer at home,” and “I’m actually doing the coolest stuff here too.” Everybody’s doing cool stuff but it wasn’t overwhelming; it was really easy to grasp and manage. That gave me a lot of confidence in the business.So to wrap up the story, I moved out to Texas and joined 3D Realms. After making some stuff with them – Duke Nukem 3D, and I helped them with Shadow Warrior – we left and started our own studio – me and some other guy. Eventually we became Gearbox, and have done all the things we’ve done. 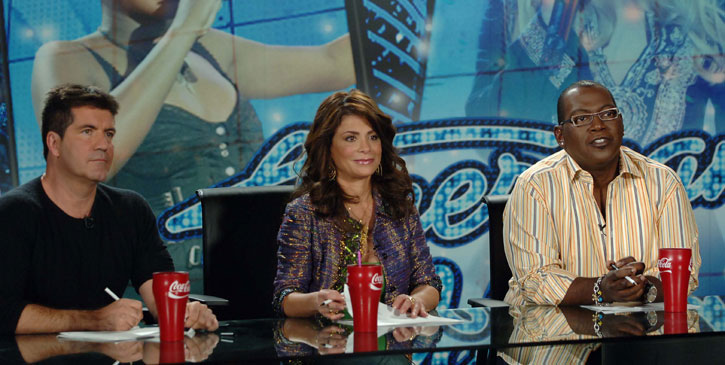 Now that Randy’s at the top, he’s the one judging the talent.

TGR: So from your story about gaining confidence and finding familiarit – is that a piece of advice that you’d give to aspiring developers? That it’s not that intimidating, just do it, be good at it, and if you show someone your work, and your work is good, then that’s it?

Randy: You have to do it. You can’t get in unless you try. Committing to it is everything – and not giving up. Just believe in it and go for it. Now that I’m in the seat that I’m in, I have come across a lot of people… Have you ever seen American Idol?

TGR: A bit, but I’m not a dedicated watcher.

Randy: I don’t really like the show, but I like watching the first few episodes in the season where they cover all the tryouts. It’s funny because invariably there’s someone that thinks they’re going to be the best singer in the world, but they get up there and they’re terrible, and they don’t even know they’re terrible. That does happen, but nobody gets good at anything without practice. I don’t believe in talent. I believe in commitment, energy, and effort. I think if you do something enough and you want to be better at it, and you want to learn, you will get better. Whether you’re doing that in a peer group or you’re on your own, whether you’re out in the sticks or you’re in the university – I’ve seen talent emerge from anywhere. There’s one consistent thing. It’s always committed, and it never gives up.

TGR: Pretty inspirational stuff. Onto some of the more simple questions – what is your favorite game of all time?

Randy: Wow. I’m going to give two. Doom, in terms of sheer number of hours invested in playing that game. It was also life-changing for me. It was Doom that really converted me from one kind of gamer into an action gamer. I was more of a role-playing, adventure gamer. Wolfenstein was the catalyst, but Doom pushed it over the top. Doom changed everything in my world, and you can see my entire career’s been affected by that. Most of the things I’ve been involved with are first-person shooters. The other one I’m going to mention is the Colossal Cave Adventure, which was a text adventure – the first game I ever played. It’s what inspired me to start hacking around and learning how to program games.

TGR: Very cool. So what are you playing right now?

Randy: Right now? There’s so much great content. I’m enjoying Fallout 3, they’re doing a good job with downloadable content. There’s some similarities too there with Borderlands, so it’s probably not a surprise that I like that game. I’ve been playing a lot of World of Warcraft, actually. There’s something about raiding where it’s similar to any team project. It takes a lot of teamwork and leadership.

TGR: Yeah, everyone needs to know their role.

Randy: Yep. You have to break down the fight and learn it, and then a leader has to motivate and drive people through it, and identify errors and correct them. That’s just one component. It’s a pretty robust game, there’s lots of components to it. I’m jealous of that game too because they get away with murder. There’s things that they do in that game that if we had in any of our games, we’d just get crucified for. It’s refreshing to know that if your motivational loop is strong enough and your game loop is tight and elegant enough, those things that people think matter so much don’t actually matter.

Randy: I’ll attempt to answer both at the same time by saying that I have done hundreds of interviews in my career and I believe it wasn’t until this moment that I’ve ever felt stumped by a question.

TGR: I couldn’t ask for a better way to conclude an interview. Thanks so much for sharing your time, experience and insights, Randy.