The Terminator from Big Head Games for the iPhone puts you in the role of a young Kyle Reese as he battles his way through Skynet before traveling back in time. He has guns a plenty, but all the ammo in the world won’t kill the monotony.

The game opens up with a decent cartoon rendering of the familiar Terminator metal skeleton. Flames in the background and a percussive score remind us that these terminators mean business. It consists of a top-down view of Kyle vs. an endless stream of futuristic killing machines. There is a Quick Game that has you saving fallen soldiers while fighting off hordes of robots and a Story Mode. 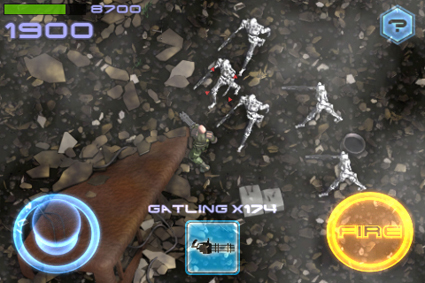 Story Mode initially consists of 6 missions that are unlocked sequentially and can be replayed individually once completed. Each level is basically the same: shoot a bunch of robots and collect an item and/or destroy something. There is no break in the action as you are constantly assaulted by cyborgs and in some cases wander around the map waiting for arrows to give you a clue on the direction of your objective. Ammo is depleted rapidly but powerups are plentiful. The standard pistol is virtually useless so constantly trolling for ammo is a must.

There are 3 modes of difficulty and two control styles. The game has a classic “Smash TV” style by using the left stick for movement and the right for aiming and firing. Joystick method has two static controls at the bottom left and right of the screen. The Drag mode allows you to touch anywhere on the screen and drag virtual joysticks around. This control style seemed to be more difficult to navigate with as the thumbs sometimes get in the way of the action. It also felt les accurate than the joystick method. The auto-aim helps, but some may like more control over their intended targets. The game can be played in landscape or portrait view. While landscape may seem like the best choice, some may prefer the portrait view for a better view of what’s ahead and behind.

The graphics are not bad. Big Head partnered with Dark Horse comics and the resulting animation is colorful and fluid. There is a good amount of activity on the screen at any given time, but the game doesn’t lag. The musical score is cinematic and the sound effects are typical gun sounds and manly grunts when getting shot with “lasers”.

Everything about the game is aesthetically pleasing. The visuals are good and the controls, while not perfect, are functional. The game itself, however, does not quite live up to be the hardcore battle for the future of mankind that you may expect. Reese moves at only one speed and that speed may be too slow to evade heavy attacks. Getting stuck without ammo can be grueling and finding health can be a challenge in itself. The Terminator can be eloquently summarized in one action – moving as fast as possible while shooting in the opposite direction.